February was met with volatility storm as the VIX index spiked up more than 100% on 5 February while the S&P 500 index only fell by -4.9%. At one point, the VIX index spiked to a high of 50 on 6 February causing the market to go into a tailspin. The general equity market headed into a risk-off mode where we saw most equity indices from Asia, Emerging markets and European markets sold-off significantly in February.

The direct impact was seen in the US equity market where the S&P 500 index fell as much as -12% intra-month to a low of 2530 points before the buyers re-emerged. As a result, we saw some contagion effect from the US spreading to the Singapore market as well after the Volatility explosion event since 5 February. The STI suffered a substantial selloff of -7.5% as it hit an intra-month low of 3340 points.

Amidst the sharp selloff, we believe a recovery back into the uptrend is underway as the market stabilises. Our “Phillip Recession Tracker” which tracks the general strength of the US equity market still signalled risk-on mode as 14 out of 15 recession indicators remained well in check. Only the VIX index indicator had triggered the threshold of 27.8 but keep in the mind the general equity market does not form a top immediately after the threshold is triggered. Historically, it goes through a period of consolidation around a higher floor of 16 before the subsequent abnormally spikes above 30 signals further panic and turmoil.

Hence, we believe the US equity market will head back into a period of stabilisation where the uptrend retakes control. From a correlation perspective, we expect the risk-on sentiment from US to translate back into the rest of the world including Singapore. Moreover, the long-term correlation coefficient between the S&P 500 index and STI is north of 0.5 suggesting strong positive correlation. Thus, a risk-on sentiment in the US should also drive the STI back into the uptrend.

From a price action perspective on STI, after falling -7.5% off the 3611 high on 24 January to a low of 3340 points on 9 February, the subsequent strong bullish recovery has also shown some sign of strength. The STI rebounded off a critical support area at the 200 day moving average and 3341 support area, keeping the uptrend intact. The intraday low of 3340 points on 9 February should be the next higher low (HL) point for this uptrend.

STI Daily Chart – uptrend held up by the 3340 support area

Moreover, the bullish recovery since 9 February has also lifted price back above the 20 and 60 day moving average signals the bullish momentum has returned. Moving forward, expect the uptrend to spur the STI higher to retest the 3600 psychological round number followed by 3650. We should continue to see the 20 and 60 day moving average propelling price higher as the market volatility stabilises.

The following table is the list of new trades were added into the “Phillip 20 Portfolio” in February. 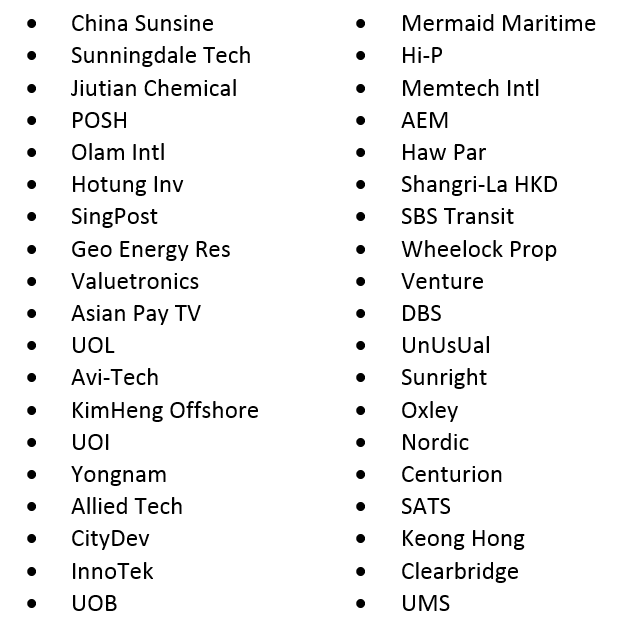