With Riverbank@Fernvale and Botanique at Bartley completely sold as at 15 May 2017 (which were already mostly sold), the Group is currently left with remaining units in Principal Garden and The Clement Canopy in the Singapore property development segment. Principal Garden and The Clement Canopy are 55.4% and 38.4% sold respectively as of 31 March 2017. Sales in Principal Garden is performing well despite competition from nearby developments.ASP remained healthy in the S$1,700 psf region. We are expecting competition for sales in Principal Garden to stiffen in the next few quarters amongst factors such as a newly launched development nearby, as well as potential price cuts from other nearby developments to avoid potential ABSD clawbacks. However, considering that the Group still has close to two years before ABSD deadline and the development is already substantially sold, we opine that it is in a “comfortable” state, and likely to maintain status quo with no substantial price cuts. We view that sales momentum in Clement Canopy which was launched on 20 March likely to hold up granted its proximity to two growing districts, One-North in Buona Vista and Jurong Second CBD.

The Group plans to launch the second phase of a development project, Park Eleven, which is located in Shanghai in 2H17. We are expecting ASP to trend higher for the second phase as compared to the first where units were transacted at an average of RMB77,000 psm. UOL intends to launch three new development projects (1050 units) for sale in CY18 in Singapore and London which we estimate will add c.S$0.09 to our RNAV estimate.

UOL has agreed to purchase a 396-room (12 rooms owned by other owners) hotel named Hilton Melbourne South Wharf for an EBITDA yield of 7% in Melbourne, Australia. The property has a 99-year leasehold which will end in July 2108 which is located in South Wharf, about 1km South from Melbourne CBD. The hotel will be rebranded to Pan Pacific following the property completion which is expected to be sometime in September 2017. We expect the newly acquired property to increase annual revenue from Hotel Operations by c.5% and boost recurring income.

With a nimble and strong execution in its development strategy, coupled with improving demand for office space in Singapore, Consequently, we have narrowed our RNAV discount to 15% from 20%. We maintain an ‘Accumulate’ rating with an upgraded TP of S$7.64 (previous: S$7.19). 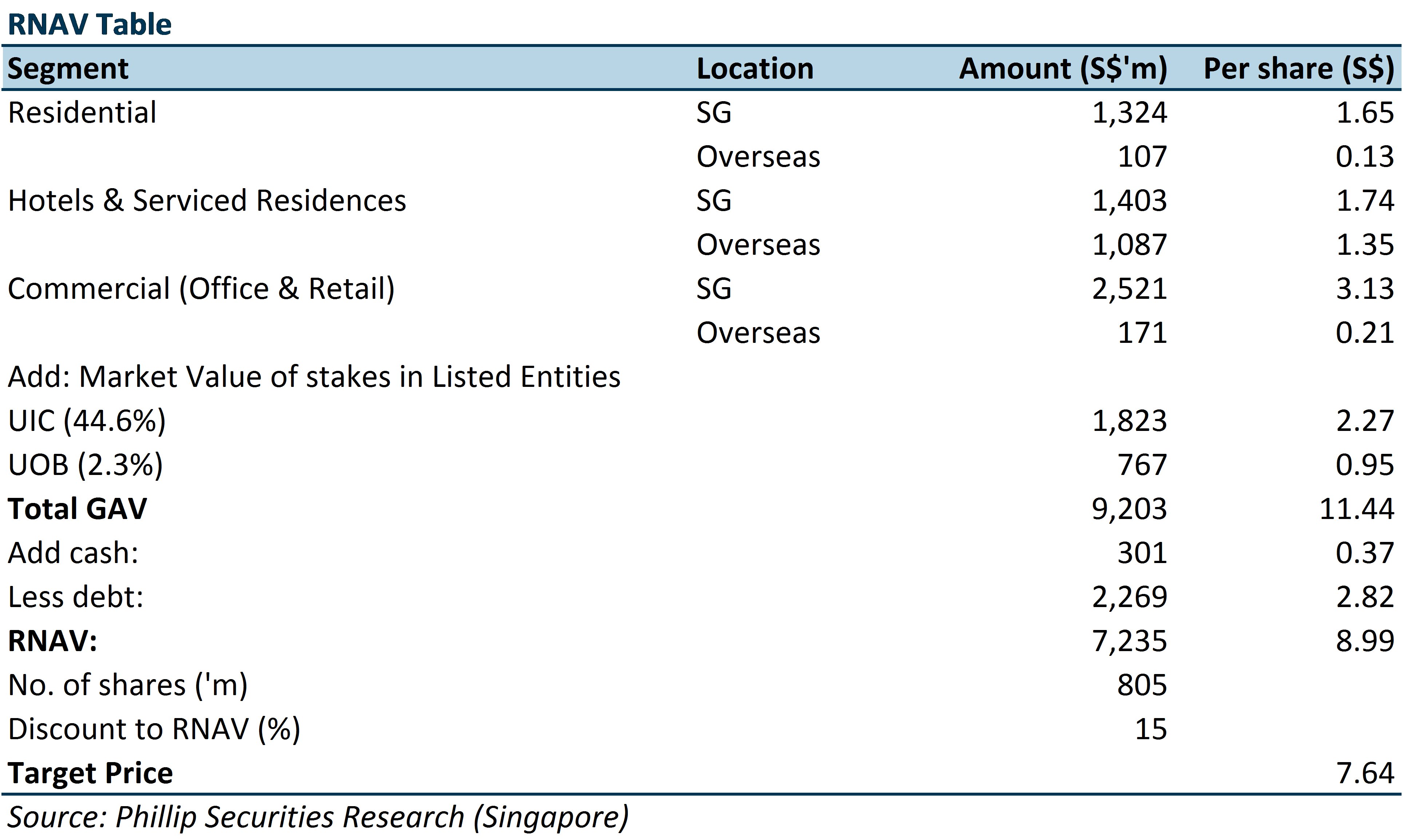