Tesla expects vehicle delivery growth to average 50% for multi-years. It expects to “materially exceed this (growth rate) in 2021”. This flags a strong pick-up in deliveries from FY20’s +35.8%. We think Tesla may be able to attain its target, with its new Model 3 upgrades and rollout of Model Y to overseas markets.

While sales in the US seemed to have stagnated in the past three years (Figure 2), recent price cuts for Model Y may have improved Tesla’s competitive positioning vis-à-vis peers in the U.S (Figure 3). Tesla has also started to deliver Model Y in China, its second-largest market. Its pricing is on par with competitors such as Nio ES6 and BMW’s X3.

A battery-cell factory is also being constructed in the Bay Area. This will reinforce its shift to in-house cell production. Tesla reiterated that the idea behind making its own cells is to help it tackle shortfalls in cell output, not disintermediate its cell suppliers such as CATL, Panasonic and LG. Instead, it is urging its suppliers to increase production and “we (Tesla) will take as many batteries as they can produce”. This points to expectations of strong demand.

Volume production of its Cybertruck is expected to be in 2022. Tesla Semi’s production is restricted by a short supply of battery cells as resources have been prioritised for cars with better margins. This again boils down to its current problem of a shortage of battery cells as global demand continues to outpace production. We believe that once supply improves, Tesla will be able to ramp up production to meet growing demand.

FCF was US$2.06bn. Management will be focusing on debt reduction. In the latest quarter, it made an early settlement of US$2bn in convertible notes. With that, debt-to-EBIT improved to 5.9x from 20.5x in 1Q20.

With improved liquidity, Tesla can turn its attention to expanding production capacity and investing in infrastructure such as a supercharging network to “get ahead of demand”.

We are positive on Tesla. We expect revenue to accelerate in 2021 with its capacity ramp-up and a potential easing of its battery-cell constraints. According to the International Energy Agency, electric cars accounted for only 1% of the global car stock in 2019. Tesla’s share of automobile sales in the US has climbed in recent years, from 0.03% to 2013 to 1.31% in 2019 (Figure 5). We see headroom for further expansion, as the adoption of electric cars is expected to receive a timely boost from the Biden administration’s green drive and policy initiatives from the European Green Deal.

Tesla Inc (US: TSLA) had a strong run-up to US$900.40 in January, which broke the top of the pennant resistance (see our report dated 25 January 2021). However, its rally lost steam and its price quickly retreated to the US$780 region before rebounding on 1 February. Technicals indicate that Tesla is looking to complete the last leg of the sub-wave v of its extended wave (iii):

*Timeline of the trade is eight weeks from date issued. 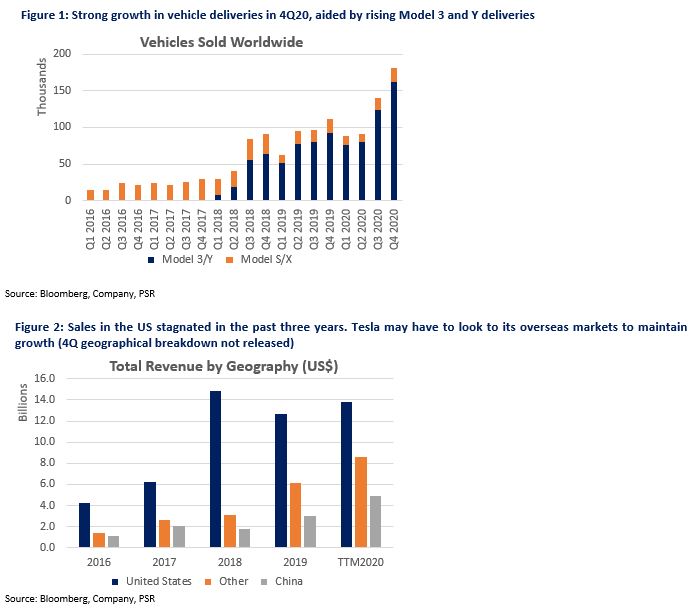 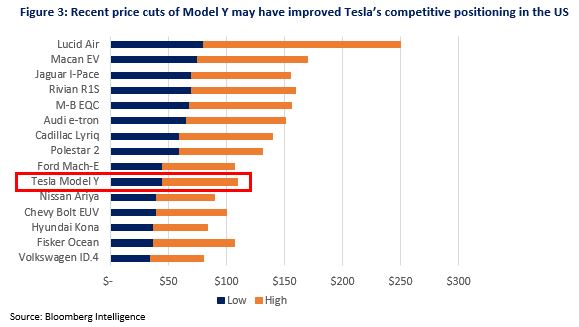