March was another disappointing month as the Straits Times Index (STI) failed to follow through with bullish momentum from the last two weeks of February. As a result, the STI was down -2.56% in March mainly caused by the general risk-off sentiment across the world.

The main highlight in March that sparked the risk-off sentiment was the harsh trade war talks between US and China. As soon as the US fired the first warning shot on 9 March, where president Trump imposed tariffs on Steel and Aluminium at 25% and 10% respectively, the S&P 500 index formed a top shortly after and rolled over into a severe selloff. Since the announcement of the Steel and Aluminium tariffs, the S&P 500 index has fallen as much as -7%. The contagion effect also dragged the rest of the global equity market down along with it including the STI but to a lesser extent.

However, we do not expect the current risk-off sentiment to stay as our “Phillip Recession Tracker” still signals for a bullish outlook as 14 out of 15 recession indicators have yet to trigger their bearish signal.

From a longer-term price action perspective, the general risk-off sentiment has dragged the STI into a prolonged correction that began in January, but the long-term uptrend remains intact. Even with the severe correction of –7.5% off the 3,611 high in February, the STI managed to keep the structure of the uptrend in place as it continues to form a series of Higher Highs (HH) and Higher Lows (HL). More importantly, the 3,354 to 3,340 support area needs to hold for the uptrend to regain strength.

On the weekly timeframe, the 3,354 to 3,340 support area held up once again for the week ended 06/04/18 proving the significance of the support area. Moreover, the strong bullish rejection resulted in price forming a hammer suggests a possible reversal higher back into the uptrend. Further clues of bullishness can be seen when the STI closes back above the 20 week moving average.

Unfortunately, both F&N and Wing Tai were stopped out in March due to the depressing price action from the general risk-off sentiment.

With the dull movement in the broad-based market in March, only three new trades were taken shown in the following table.

Note: The March new entries of KrisEnergy and Genting Sing have hit their respective stop loss resulting in -9.68% and – 8.85% loss to the portfolio. Average loss from these trades were -0.92%.

After a major reshuffling of the portfolio, there are currently 14 stocks within the “Phillip 20 Portfolio.” The following is the revised watch list that we are closely monitoring: 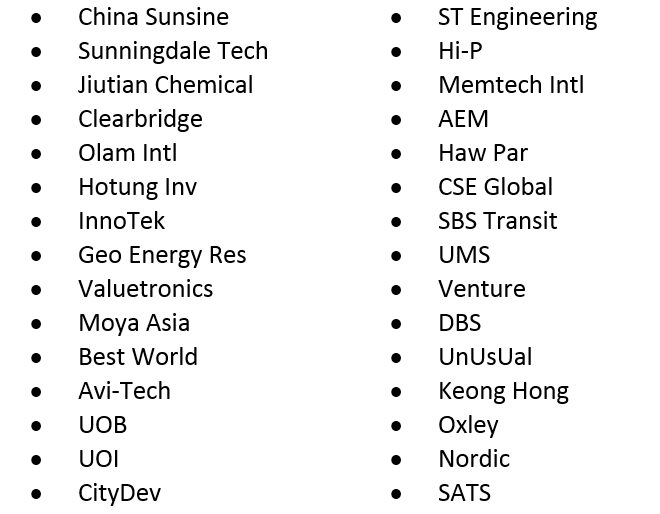