Volatility returned in March as the S&P 500 index experienced some rally of 4% in early March followed by a -6.5% selloff in the second and third week of March. In total, the S&P 500 index fell –3.07% in March. On the flipside, the VIX index also traded above 20 for the most of March further validating the heightened volatility environment.

The main highlight in March that kick-started the risk-off sentiment was the departure of two key white house officials and the recent trade war tariff talks between US and China.

Overall, the above news caused the market to enter into a risk-off mode as the market prices in new element of uncertainty.

Currently, the trade war scare still seems to be plaguing the market as the equity market struggles to move back into an uptrend.

Nonetheless, the overall economic data in the US remains rosy despite the ongoing trade war talks. More importantly, we will have to monitor a few more months of economic data to gauge if the trade war is taking a toll on the economy

Staying data dependent, the Phillip Recession Tracker remains in the healthy zone except for the VIX index and Ted spread. 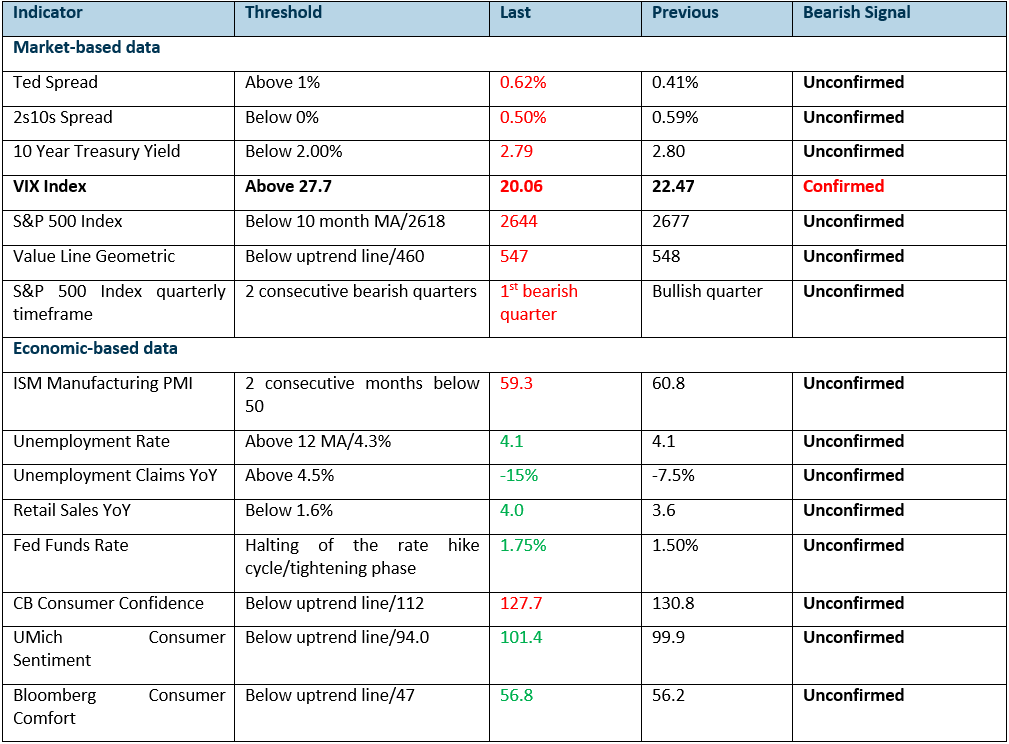 In the February monthly review, we mentioned the breakout of the Ted spread above the two months range of 0.36% is something to watch. With another month gone, it seems that the Ted spread has woken up from the slumber and shifted into a period of heightened uncertainty. The Ted spread continued to spike higher after last month’s breakout, reaching a new 52 week-high of 0.61% in late march signalling greater distress in the interbank level. Watch closely to see if this upward trajectory in the Ted spread sustains or not.

Note that the key threshold for signalling the extreme bearish scenario is when the Ted spread breaks above the 1% level. Ted spread will be one of the more important metrics to watch as it is following the footsteps of the VIX Index signalling some early crack signs.

After trading back below 20 range since mid-February, the VIX index began to spike erratically again on two occasions. On 19 and 22 March, the VIX index experienced sharp spikes of 20% and 30% respectively suggesting the market is still in a fragile state. As long as the VIX index trades sideways below 20, the general equity market should continue to enjoy the risk-on behaviour. If the VIX index does spike up above the 30 range again, that might signal further market turmoil and weakness.