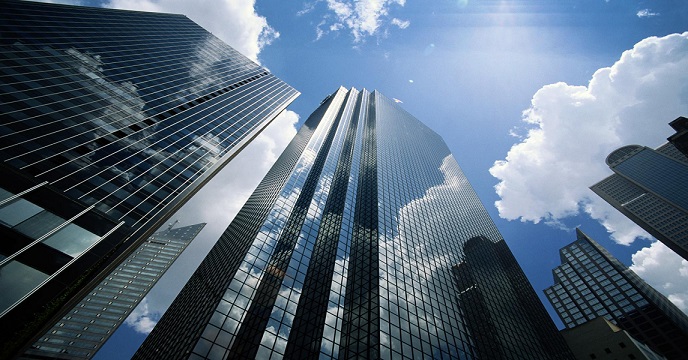 3-month SOR continues its ascent. Hitting 1.91% in January, the 3-month SOR is close to double what it was a year ago. While the Federal Reserve did not make any changes to its interest rate policy during its January meeting, Chairman Jerome Powell mentioned that “the case for raising rates has weakened somewhat”.

Retail: Weak tenant sales growth still continue to weigh down on rental reversions. Tenant sales ticked up slightly YoY in 4Q18 for CapitaLand Mall Trust (CMT) while that of Frasers Centrepoint Trust (FCT) remained flat YoY in 4QCY18. No notable improvement in average occupancy cost YoY for both CMT and FCT in FY18, though this figure has crept up over the years – 18.4% in FY18 from 17.6% in FY14 for CMT and 16.6% in FY18 from 15.3% in FY15 for FCT. Tenant mix re-configuration is key to boosting tenant sales and footfall. Retail sales (excluding motor vehicle sales) declined 3% YoY in December, with declines seen in all segments save for the medical goods & toiletries segment.

Office: Central office rents continued its upward trajectory to end the year at 181.4 pts (+13.3pts YoY) in 4QCY18. Overall occupancy remained stable at 87.9%, with demand still coming on strong from the banking & financial services, business consultancy and real estate and property services segments. Above 98% occupancy for the office REITs, well above the average central office occupancy of 94.8%. Co-working space operators continue to be a burgeoning source of demand – in 2018, the introduction of co-working operator The Work Project Kingdom (TWPK) (which CapitaLand owns a 50% stake in) was the main booster of occupancy at Asia Square Tower 2 (98.1% in 3Q18 vs 91.9% in 2Q18).

Industrial rents remained flat YoY in 4QCY18 while occupancy inched up slightly, driven by the single-user factory and warehouse segments. Tapering supply of space continues into 2019, but tepid industrial activity is keeping our expectation tempered. Rental reversions during the quarter were generally negative. Tenant optimism in 2H 2018 was lower than in 1H, as they started to taper expansion plans. The general sentiment has been more subdued in 2H 2018 compared to 1H. According to The Business Times, Google is understood to be in advanced talks to lease close to 400k sqft at Alexandra Technopark.

Hospitality: Average RevPAR for 2018 rose 3.5% YoY, reversing the negative YoY growth recorded in the past five years (save for 2014: +0.3%). The luxury segment saw the strongest RevPAR growth of +5.9% YoY, closely followed by the +4.7% growth recorded by the economy segment. According to one of the Hospitality REIT managers, the reason for the latter is likely to have been the increased number of stopovers in Singapore coming from the cruise segment – total cruise passenger throughput increased 35% YoY, majority of which stem from India. RevPAR for the Singapore portfolio of the listed REITs were resilient, with the boost stemming mostly from higher occupancy rates than from growth in average room rates. Both transient and corporate demand were resilient, with the latter being supported by the ASEAN summit held in 2018. In addition, the Oakwood Premier OUE Singapore has been the latest serviced residence to obtain a hotel license, joining the likes of Ascott Orchard and Ascott Raffles Place.

While the S-REIT yield spread is currently below the -1SD level since the global financial crisis, strong rental growth should offset any adverse effects from rising interest rates. The Fed’s dot plot median projections are for two rate hikes in 2019. While higher interest rates are typically negative for the sector, it does not imply a bear cycle, provided the REITs can grow their rents faster – our estimates: by -1% to 5.3% – than the rise of their interest expenses (which can also be managed via fixed debt or interest rate swaps) or manage their capital structure for acquisitions

We maintain Neutral on the S-REITs sector, with selective sub-sector preferences. 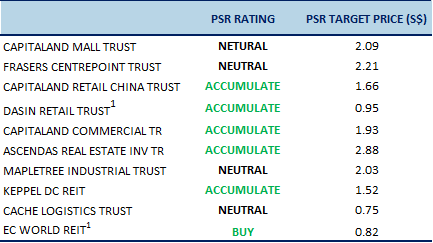 1 Covered by PSR under the ‘SGX Stockfacts’ scheme