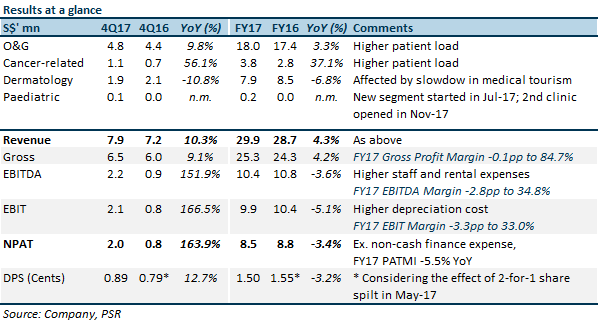 + Stronger contributions from Gynaecology mitigated slowdown in Obstetrics. 2017 birth rate in Singapore was affected by Zika virus outbreak (between Aug-16 and early-2017). There were early sign of recovery only in 2H17. Nonetheless, the Group delivered 1,716 babies in FY17, comparable with FY16’s 1,728 babies. Worth noting, Dr. Natalie Chua has generated high double-digit growth YoY in FY17.

+ Profit from Cancer-related segment more than doubled. FY17 EBIT margin expanded from 14.0% to 23.9%, thanks to the stellar performance from Dr. Radhika. The Group’s marketing strategy has proven to be successful.

+ FY17 total dividend of 1.50 Scents with slightly higher payout ratio at 84% (vs FY16’s 83%). The Group has been stepping up its payout ratio. We expect a 1.55 SCents FY18e dividend, implying a dividend yield of 4%. We believe that it could be achievable with the Group strong cash generating businesses and zero-debt position. In addition, no further cash commitments, as the second and third cash tranche consideration of S$4.0mn each for the acquisition for Dr. Joyce Lim’s businesses was fully paid as at 31 Dec-17.

– FY17 profitability was dragged by:

a) Weaker foreign demand was partially mitigated by higher local patient load. FY17 EBIT from Dermatology -18.7% YoY to S$2.41mn, but was within the expectation range of S$2.3mn and S$2.5mn (expected recurring profit mentioned in the acquisition deal).

We are cautiously optimistic about FY18e. Impact from the revival of Zika cases in Jan-18 (the third wave) should be contained compared to initial panic seen in Aug-16 (the first occurrence). We also expect persistent weakness in Dermatology business on slowdown in Singapore medical tourism. Management shared that foreign patient accounts for c.30% of Dermatology patient load.

On a positive note, we believe that its Cancer-related segment should continue to gain traction and support the Group’s growth in FY18e. Meanwhile, two doctors, namely Dr. Hong Sze Ching and Dr. Lim Siew Kuan, have broken even in FY17 and will be contributing positively to FY18e earnings. In addition, both Paediatricians are on track to breakeven by end-FY18 – Dr. Lim Xue Yan by 1Q18 and Dr. Irene Teo by 3Q18.

Assisted Reproductive Technology services under the collaboration with KL Fertility Centre is on track to commence by 1Q18. (Related report: Singapore O&G – Completing the life cycle)

We trimmed our FY18e revenue/earnings by 6%/16% on challenging business environment. These translate to a lower FY18e EPS of 1.82 SCents.

We are cognizant of the margin pressures arising from sluggish birth rate, slowing medical tourism, higher operating costs and the latent period of the new doctors. Nonetheless, we remain upbeat of the Group’s ability to deliver organic growth. The Group has been actively seeking new recruits of medical practitioners to expand its four growth pillars. Management targets to add 2 new specialists, one in Dermatology/Aesthetic segment and one in either O&G or Paediatrics segment, into the Group by FY18e.

Management also shared that it has recently adjusted its fees upward to mark to market rate: (a) Dermatology’s consultation fee +15% on average; and (b) delivery fees +10-15%. These should be able to cushion the margin pressures somewhat.

While the long-term fundamentals remain intact, we have revised to a lower PER to 23.2x (previously 29x). This is in-line with the lower peers average PER, as well as due to the recent corporate movements. The Group has appointed a new Lead Independent Director and Audit Committee Chairman, but is still in search for a new CEO. We will review the PER once the new CEO comes on board, to see if the Group’s strategy moving forward remains the same.

Figure1: Historical PER since Jan-16 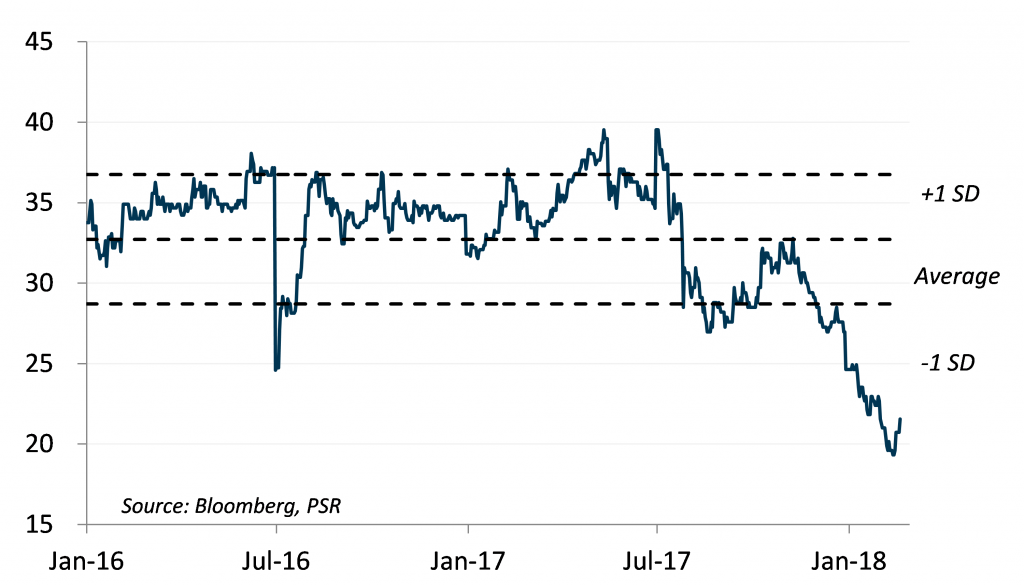 Figure 2: SOG is trading at a 15% discount to its peers average forward PER of 25.5x