Any resilience expected for local interest rates in March took a hit over the past week, with 3M-SIBOR falling to 0.69% and 3M-SOR falling to 0.26%. This is 86 bps and 103 bps lower from the average rates experienced in 1Q20 respectively (Figure 2). 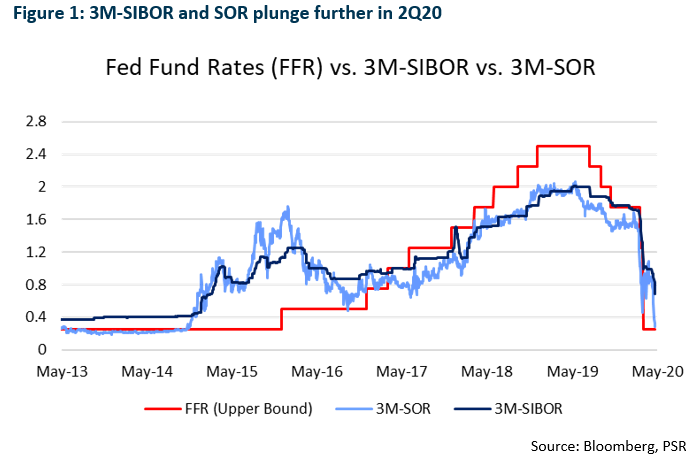 Impact on NIM for local banks

The lower interest rates will see local banks face downward pressures on NIMs from 2Q20. In particular, UOB have seen NIM compress by 7 bps YoY while DBS saw NIM compress by a more modest 2 bps YoY in 1Q20. OCBC was able to hold NIM stable in 1Q20 YoY as CASA deposits grew from $138bn to $160bn YoY (+16% YoY), marking a CASA ratio improvement from 47% to 51% as of 1Q20.

We have revised full year NIM for each of the banks downwards by 10 bps from their reported NIM in 1Q20 (Figure 5). This will result in a c.5% impact on NII.

We expect consumer loans to continue to decline as consumer spending weaken due to the economic lockdown, but businesses loans may benefit from government relief measures to support lending to businesses looking to tide through the liquidity crunch. We maintain our expectations for loans growth to come in at 3% for FY2020. 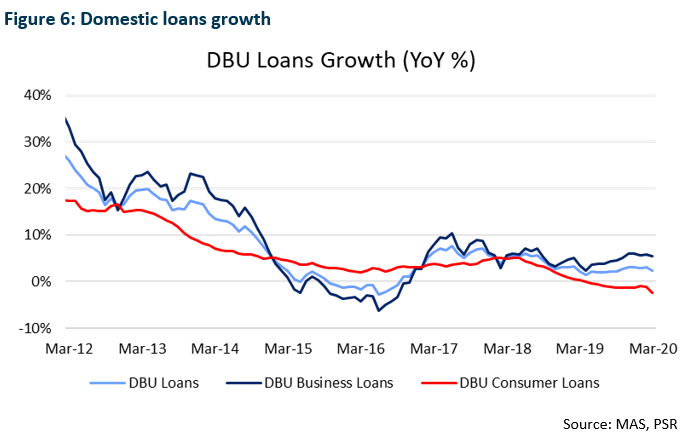 All three banks have released their 1Q20 results over the past two weeks, with earnings largely impacted by allowances undertaken for possible impact as a result of the COVID-19 pandemic.

The banks have guided for credit costs increment over the next two years of between 80 – 130 bps alongside slowing of business momentum moving forward.

Below is a brief summary and comparison of the banks’ performance in 1Q20. 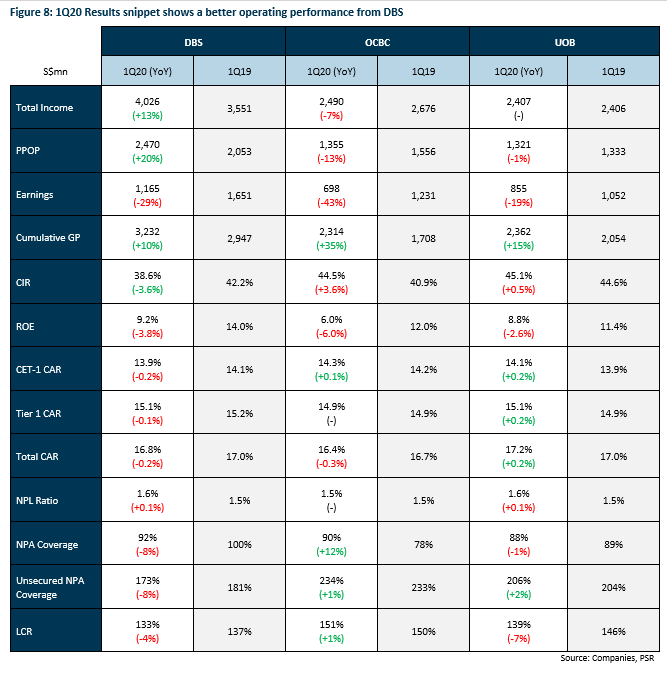 Volatility fell over the past 1.5 months, as the VIX index fell from a monthly average of 57.7 in March to 41.4 in April. For the month of may, the trend looks set to follow suit, with MTD VIX average at 32.6.

Based on data released by SGX for the month of April, DDAV showed signs of fatigue, falling to 0.83mn contracts in April, a 19% fall YoY and 35% below the average of 1.2mn contracts in the first quarter of 2020. Derivatives performance looks to extend its muted performance in 2Q20.

While SDAV has also fallen from the peak experienced in March, figures for April still represents a 35% increase YoY. Preliminary data for May continue indicate slowing growth, but securities should still experience double-digit growths for the period ending June 2020 for SGX.

Reduce the Singapore Banking Sector to Neutral. Earnings will be impacted negatively by 20 – 30% over the next two years as local banks begin building allowances to withstand the impact from the COVID-19 pandemic. Nevertheless, expected dividends remain attractive, providing 5-7% yield for investors and current prices.

As such, we have revised our target prices of the respective banks by taking on necessary allowances (Figure 11) and compressed NIMs to reflect the impact of interest rate cuts in March.

We pick DBS as our preferred counter within the sector, as its business momentum remains the strongest among the three banks, which will see it better tide through the medium-term headwinds. Its capital position and dividend policy also presents investors with highest level of dividend yield at 6.95%, which are paid out on a quarterly basis.

We expect DBS dividend yield to be resilient as the bank has emphasised its commitment to stable dividend not limited to any targeted payout ratio or CET-1 ratio as long as operational performance is not heavily compromised. The bank expects full year revenue to come in at levels similar to FY19, with YoY increase of $500mn in 1Q20 to be offset by slower business momentum for the rest of the year.