Alternative asset class prove to be a good diversifier this month. Commodity and Gold ETFs returned positively in March, mitigating losses from our exposure to equities. Commodities, including gold, might finally be responding to the inflationary risk resulting from the trade war.  Bonds have also retained their traditional role as portfolio diversifier rather than return enhancer.

We are currently on red alert due to the weakness of the current market price action for several major equity market indices, especially S&P 500. Also, other risk indicators that we track are already flashing signs of a crack. Under our key charts (highlighted below), we note the widening of the credit spreads for all sectors by around 10 to 15 bps in March. This reinforced the view that investors are getting more risk-averse and price sensitive.

The TED spread, and the LIBOR-OIS spread has also widened in March. The two spreads which measure interbank liquidity are at levels which are signalling stress in the interbank market. On average, both spreads ranges between 10 to 50 bps, however, as of end-March the Ted spread is at 63bps while the LIBOR-OIS spread is at 60bps. The pace of change is also startling as both spreads increase by 19bps in one month.

The probability of a bond rout has subsided significantly with the 10-year UST yield heading down from its high of 2.94% in February. The Commitment of Traders (COT) report for net non-commercial traders on US 10-year Treasuries futures are at extreme oversold conditions and is usually seen as a contrarian indicator. Therefore we expect a short squeeze on the sellers and should see bond prices heading higher, and yields lower. 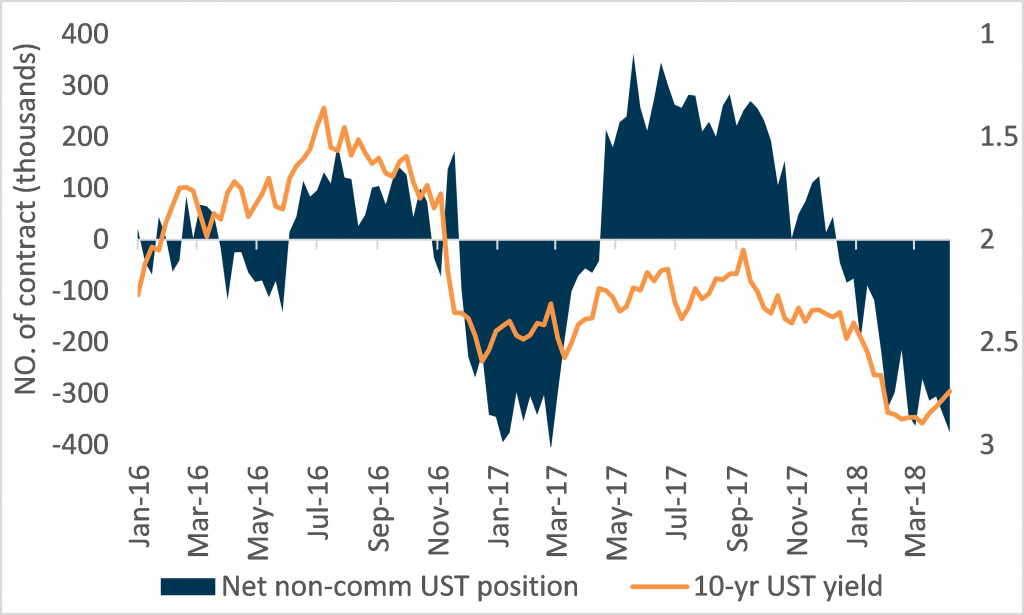 *Performance is based on total return with dividend reinvested in based currency.
Performance calculation does not take into consideration any transactional cost or brokerage fee.
Source: Bloomberg, as at end March 2018

As mentioned previously, a market that is overvalued, overbought and over-bullish will remain buoyant until sentiment changes. We believe we are witnessing a shift in sentiment right now. In light of a tightening monetary condition, escalating trade tension, tech scandal and a special counsel investigation into Russia’s involvement in the 2016 US presidential election, we believe it is prudent to lower equity risk and shift into the safety of bonds. We have thus updated our strategic asset allocation as follows.