+ Rate of decline in Taxi population shows sign of bottoming. YoY contraction had peaked in April 2018 at -19%, and the pace of contraction has slowed down for two consecutive months. We believe the worst is over for the Taxi industry, in view of the positive impact following the exit of Uber and resultant restructuring of the ride-hailing industry. ComfortDelGro has also started buying new taxis.

+ Momentum for TDVL issued has been maintained. Each of the six months YTD saw at least +22% YoY growth in TDVL issued. The total number of TDVL issued for 6M18 period has doubled YoY, and has been sufficient to offset the natural attrition of licence expiries. The number of valid TDVL holders remains flat at +0.3% YTD. We maintain our view that a sustained average of about 400 new TDVLs issued monthly would be sufficient to result in growth in number of valid TDVL holders.

– +0.7% MoM growth in Rental cars population. This comes as a surprise, as we were expecting a MoM decline instead. Our expectation was based upon earlier media reports of unhired cars from Lion City Rentals (LCR) being put up for sale in the used-car market, and only 51% of private hire chauffeurs had passed the Private Hire Car Driver’s Vocational Licence (PDVL) by the June 30 deadline.

We maintain Overweight on the Land Transport sector, on the positive industry restructuring following the exit of Uber and the worst being over for the Taxi industry. We maintain our Accumulate rating on ComfortDelGro, with unchanged target price of $2.69.

Our previous Land Transport sector report was published on 9 July 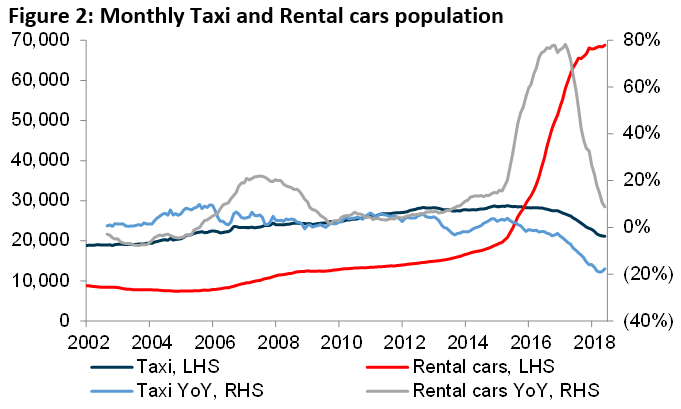