The outlook is positive and improving. We discuss in our Land Transport sector report (8 June) the positive industry restructuring (Uber’s exit from the market) and regulatory action coming into effect which levels the playing field (deadline for attaining Private Hire Car Driver’s Vocational Licence). The purchase of new taxis and bookings growth are signalling the worst is over.

At the same time, we are confident of the narrowing of Downtown Line (DTL) losses, as ridership ramps up (discussed overleaf). This should positively mitigate the impact from the transition of North East Line (NEL) and Sengkang LRT and Punggol LRT (SPLRT) to the new rail financing framework (NRFF), which has an EBIT margin cap of 5%.

We have tweaked our assumptions for Taxi revenue and capex, as well as Rail ridership. Our FY18e/FY19e PATMI is now +2.3%/+5.3% from previous estimates. Our target price gives an implied FY18e forward P/E multiple of 18.9 times. The 10.4 cents full year dividend is sustainable, supported by positive free cash flow.

Noticeable spikes in ridership were due to the commencement of service for DTL1, DTL2 and DTL3 in December 2013, December 2015 and October 2017 respectively.

Each spike in ridership has been sustainable, indicating an immediate change in travel pattern by commuters; as opposed to a novelty-effect of commuters experimenting on the new line. In addition, there has been a ramp-up in ridership, suggesting a gradual adoption as more commuters embrace the new transport infrastructure. 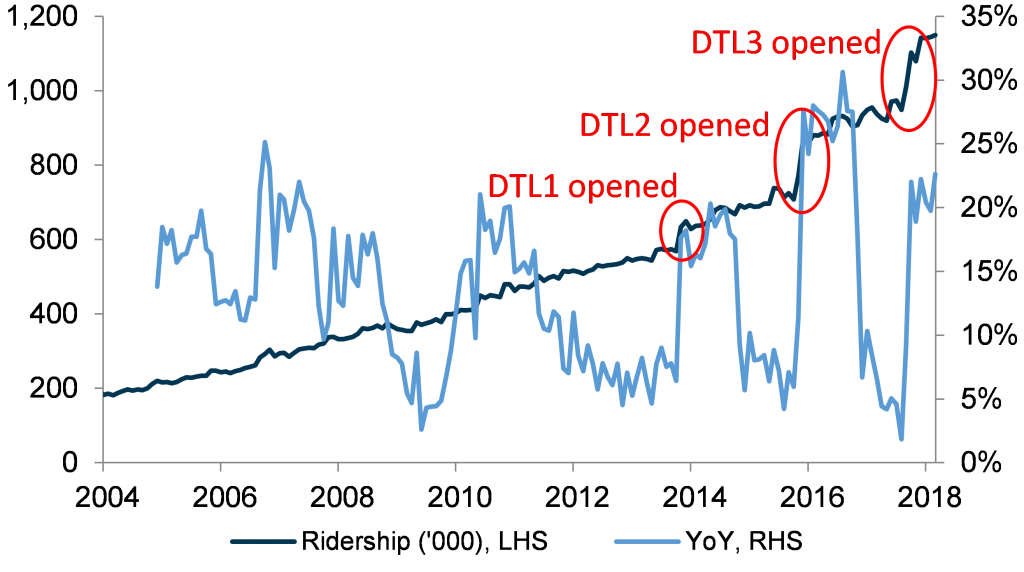