The outlook is positive. Data centre demand remains robust, underpinned by increasing cloud adoption, rapid digital transformation, data centre outsourcing and data sovereignty regulations. The Manager achieved the S$2bn AUM target set for 2018 but does not have a new target for 2019. The Manager articulated that it intends to maintain the pace of acquisitions. However, we think the pace could be hampered by tightening capitalisation rates. The Manager commented on the difficulty in finding assets to buy with a limited deal flow, as owners are holding on and not willing to sell. The asking capitalisation rate for those prepared to sell are very tight.

While the long-term demand drivers for data centre remains intact, downside risk may arise from the rich valuation with the implied 1.37 times FY19e P/NAV multiple.

KDCREIT trades at a higher P/NAV multiple compared to other listed S-REITs. We believe this is a reflection of the burgeoning demand for the unique asset class of data centres. 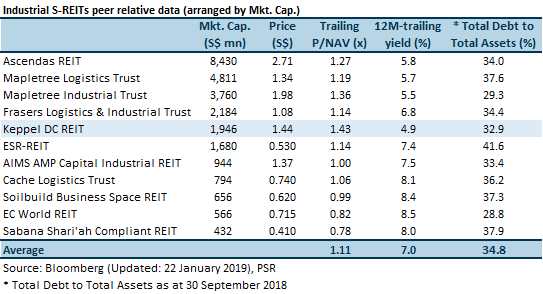