Japan-Weekly Strategy Report “The Nikkei Average Breaking Through 28,000 Points and Those Related to Boeing” November 16, 2022 55 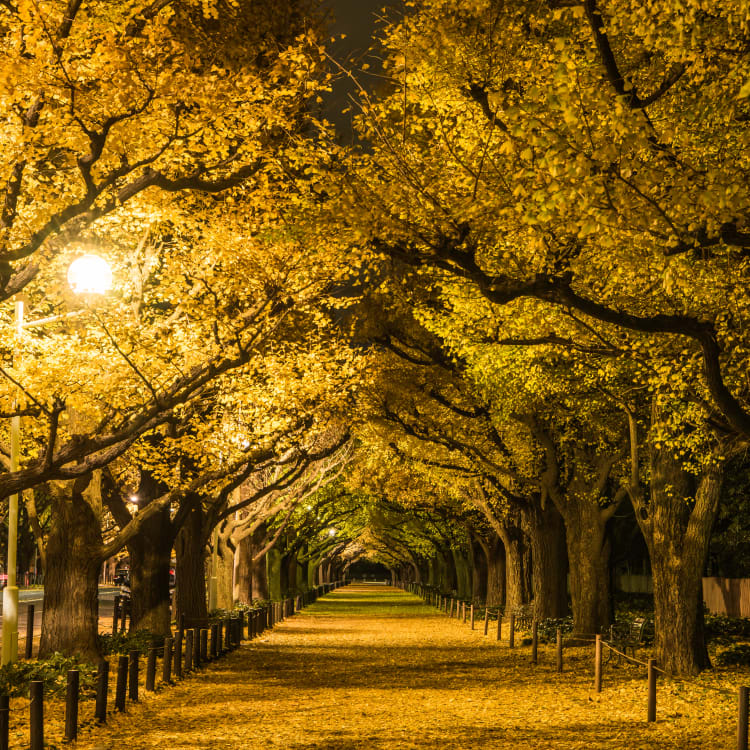 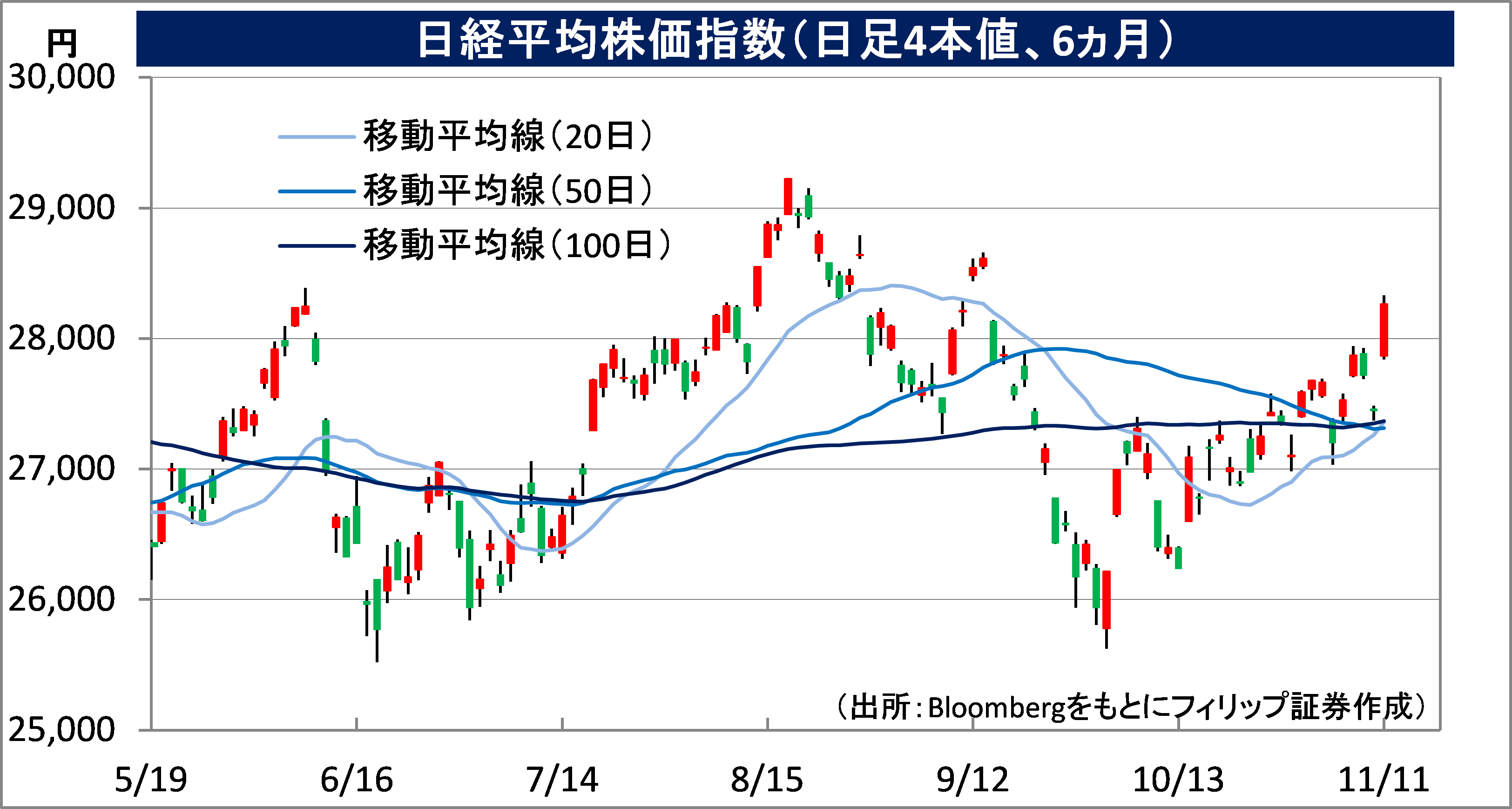 “The Nikkei Average Breaking Through 28,000 Points and Those Related to Boeing”

In response to the announcement of the October U.S. Consumer Price Index (CPI), on the 11th, the Nikkei average exceeded the big mark of 28,000 points by rising by 883 points at one point to 28,329 points. For the U.S. CPI, both the overall index and the core index (less perishable food and energy) exceeded market expectations to have a slowdown in growth rate, which was taken as a sign of the “cumulative effect” of monetary tightening as mentioned in the U.S. FOMC (Federal Open Market Committee) statement released on the 2nd in U.S. time. Hence, it is believed that expectations have increased regarding the “decrease in the range of interest rate hikes” at the FOMC from December onwards. As a result of this, the exchange rate, which has seen progress in the sale of yen and dollar purchases due to the gap in Japanese and overseas interest rates, has progressed in the appreciation of the yen against the dollar from 146 yen/dollar right before the U.S. CPI announcement to 141 yen/dollar on the 11th. Even with unfavorable conditions of the yen appreciating against the dollar, partially attributed to the significant increase in semiconductor-related stocks in the U.S. stock market, the Nikkei average was pushed up from the increase in stock prices of stocks that have a high degree of contribution to the Nikkei average.

American aircraft giant Boeing (BA) held a briefing for investors and analysts on the 2nd, last held 6 years ago. The company, where more than a total of 28 billion dollars went bust between 2019-21 as a result of the blow from the global operation suspension of the small 737 MAX aircraft, the COVID-19 pandemic and the supply chain chaos, is said to be predicting the generation of 10 billion dollars annually in free cash flow (FCF) by the mid 2020s. The company’s stock price also rose more than 20% at the closing price of the 10th compared to the closing price of the 2nd. Examples of Boeing-related enterprises are the main wings and fuselage Mitsubishi Heavy Industries (7011), Kawasaki Heavy Industries (7012), Subaru (7270) and Nikkiso (6376), the carbon fibre Toray Industries (3402), the tyres Bridgestone (5108), the titanium Toho Titanium (5727), the kitchen and bathroom Jamco (7408), the flight control Nabtesco (6268) and the auxiliary power unit Sumitomo Precision Products (6355), etc. Furthermore, Mitsubishi Heavy Industries and Kawasaki Heavy Industries will likely attract attention as they also hold important positions in those related to defence and energy. 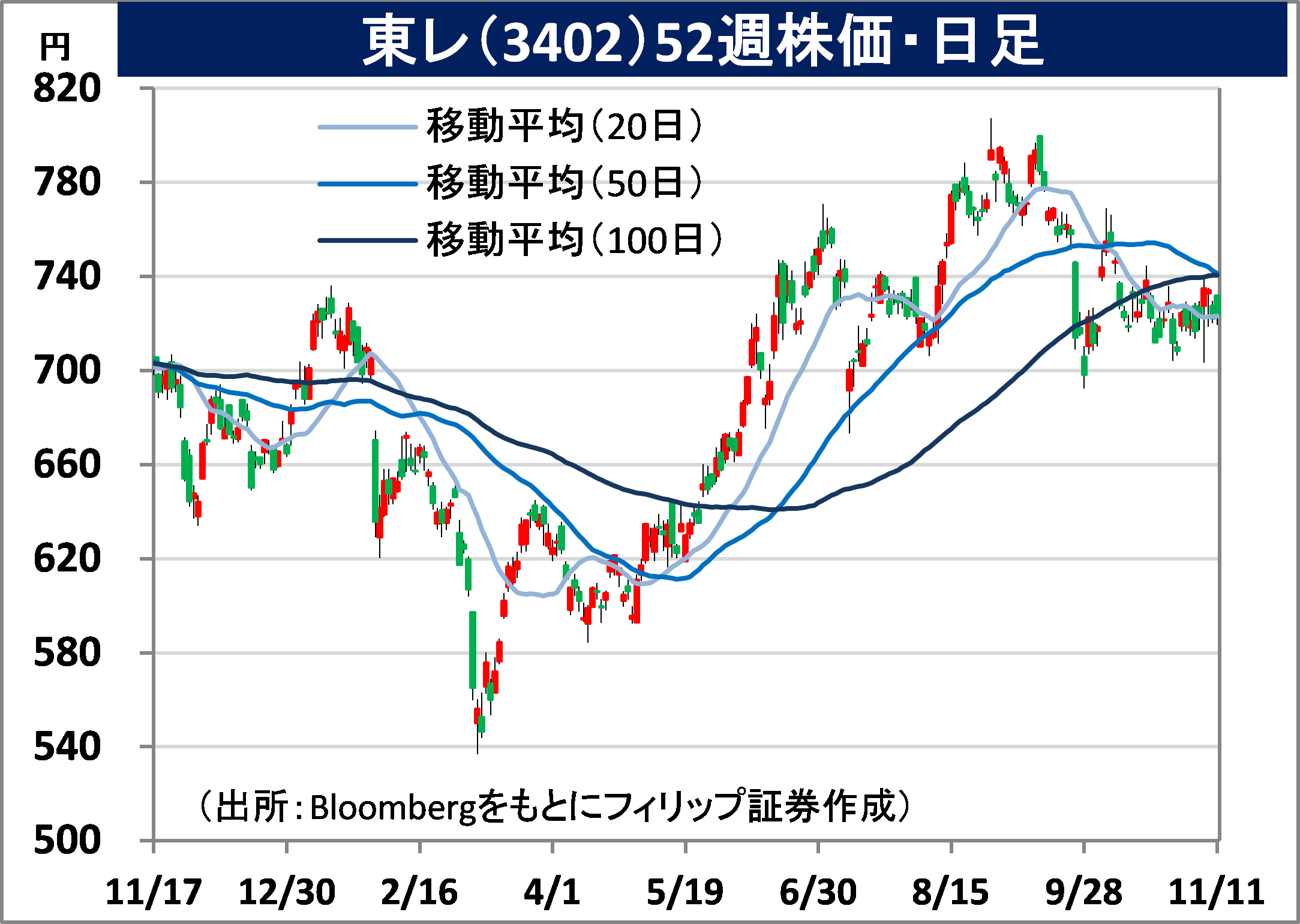 ・A basic materials manufacturer that established in 1926. Carries out businesses such as fibres, functional chemicals, carbon fibre composite materials, environment and engineering, and life sciences, etc. They are top in the world for polyester film and carbon fibres for aircrafts.

・For 1H (Apr-Sep) results of FY2023/3 announced on 8/11, sales revenue increased by 18.7% to 1.2617 trillion yen compared to the same period the previous year and business profit excluding profit and loss that occurred due to extraordinary factors from operating income decreased by 22.5% to 54.421 billion yen. For each main segment, all businesses had an increase in revenue. Business profit was impacted by the decrease in income in the life sciences business and the functional chemicals business.

・Company revised its full year plan downwards. Net sales is expected to increase by 16.7% to 2.6 trillion yen compared to the previous year (original plan 2.625 trillion yen) and business profit to decrease by 1.6% to 130 billion yen (original plan 140 billion yen). Annual dividend is to remain unchanged at the existing forecast of a 2 yen dividend increase to 18 yen. The American aircraft giant Boeing forecasted an increase to 400-450 units of their mainstay small aircraft, the 737 MAX, to be handed over next year (forecast of 375 units this year) at an IR briefing held on the 2nd. This is expected to benefit the carbon fibre business. 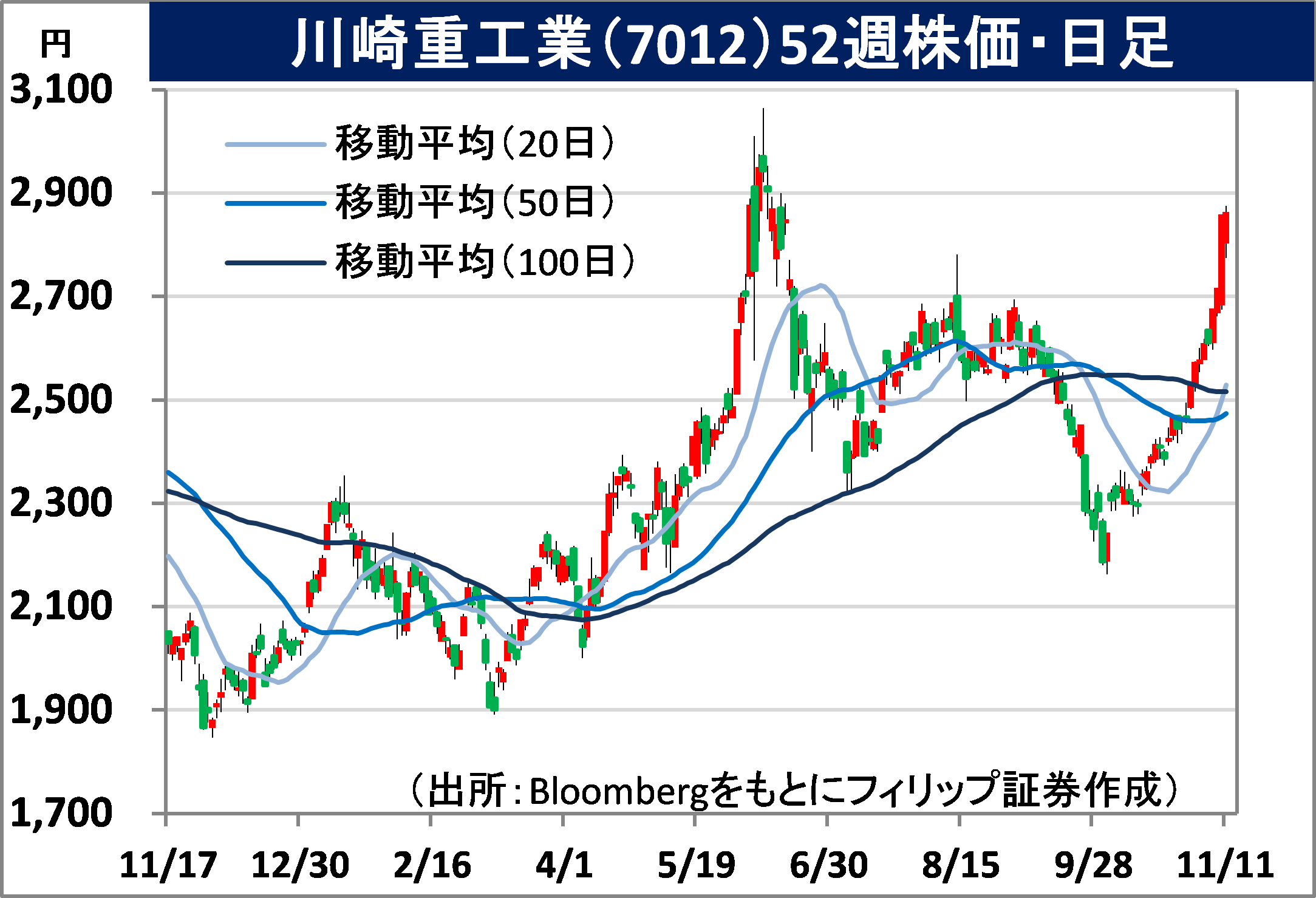 ・For 1H (Apr-Sep) results of FY2023/3 announced on 10/11, sales revenue increased by 11.6% to 759.745 billion yen compared to the same period the previous year and business profit excluding profit and loss that occurred due to extraordinary factors from operating income increased by 74.8% to 30.83 billion yen. For business profit by segment, aerospace systems, energy solutions & marine and motorcycles & engines contributed to an increase in profit.

・Company revised its full year plan upwards. Net sales is expected to increase by 14.6% to 1.72 trillion yen compared to the previous year (original plan 1.69 trillion yen), business profit to increase by 2.5 times to 76 billion yen (original plan 56 billion yen) and annual dividend to have a 30 yen dividend increase to 70 yen (original plan 50 yen). They are predicting improved earnings in the aerospace systems business as well as price increases and sales expansion mainly in the motorcycles & engines business. The company’s plan to use large-scale liquefied hydrogen carriers in practical applications by the mid ’20s, etc. is positive in establishing a hydrogen-based society.