In FY16, GEAR produced 9.5mn tonnes of coal, out of which 7.5mn tonnes and 2 mn tonnes were from BIB mine and KIM mine respectively. As of 1H17, the group completed 43% of the FY17 target production of 14mn tonnes (BIB: 12mn tonnes, KIM: 2 mn tonnes). GEAR longer-term target is to more than triple production in five years to 34m tonnes in 2021.

Currently, GEAR owns four key coal mining concessions and large total reserves of 778mn tonnes. In May-17, the group proposed to acquire a mine, BSL. Upon the completion of the acquisition, the total reserves are estimated to be 993mn tonnes.

The domestic market took up more 50% of the coal sales in FY15 and FY16 respectively, followed by China (>20%) and India (>10%). The group is aligning the production with the rising domestic coal demand as well as complying with policies that prioritise coal for domestic needs.

Golden Energy and Resources Limited is the largest coal producer listed in Singapore. The Company sources thermal coal from its coal mining concession areas, covering an aggregate of approximately 42,904 hectares in South and Central Kalimantan, Jambi (a province in Sumatra), and South Sumatra Basin Indonesia.

Currently, GEAR owns four key coal mining concessions, namely PT Borneo Indobara (BIB), PT Trisula Kencana Sakti (TSK), PT Wahana Rimba Lestari (WRL), and PT Kuansing Inti Makmur (KIM), shown in Figure 23. As of Dec-16, reserves excluding TKS’s arrived at 778mn tonnes. Together with PT Barasentosa Lestari (BSL) which the Group proposed to acquire in May-17, total reserves under GEAR reach 973mn tonnes. It is able to support GEAR’s development for more than 40 years provided the production will be maintained at 20mn tonne per annum. Coal produced in the BIB mine has a wide range of calorific value (CV), meaning that coal supply from the mine caters to both power generation (low CV coal demanded) and metallurgy (high CV coal demanded). Diversity in coal grades enables the group to buffer the impacts from the cyclical fluctuation of coal demand since electrification is not necessarily correlated with a metallurgical boom.

Furthermore, GEAR owns a broad field of forestry resources, and the concession of which is held by PT Hutan Rindang Banua (HRB). The listed plantations as consumer products will cater to demand from growing domestic middle class. Though pulp log sales are trivial in terms of revenue contribution as of now, there are a lot of untapped resources awaited to be utilised. For instance, 13,523 ha of land have land rent-use right, representing areas of overlapping mining permits with third parties who have encroached onto the group’s forestry concession land to carry out mining activities. In other words, GEAR will receive compensation from these third parties as an extra income. 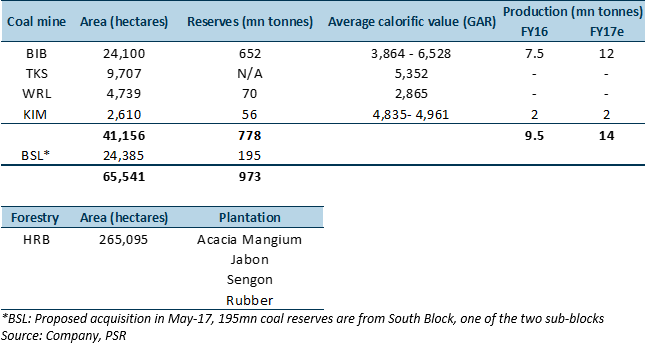 Figure 24: Locations of the existing mines

GEAR sells coal to multiple countries across Asia. Amongst all, shown in Figure 25, China is the biggest coal export market, followed by India. Korea, Thailand, Malaysia, Singapore, UK, and Philippines purchased coal from GEAR though revenue from them accounts for less than 5%. Domestic coal sales increased by 4ppt to 58% in FY16 in Indonesia which remains a major market for GEAR’s coal.

Diversified sales channels are an important stabiliser to the group. As we mentioned above, coal trading is substantially sensitive to government policy changes wherever it occurs in the domestic or overseas market. For GEAR, shifting it target market is critical as it captures this next wave of coal consumption. In other words, the group is aligning the production with rising domestic coal demand as well as complying with policies that prioritise coal for domestic needs. Therefore, more than close to 60% of the turnover is sheltered with a promising demand. Indonesia coal is still in demand in both China and India for a relatively long period in the future. However, both governments, who mediate between internal supply and external import, prioritise interests of domestic coal producers undoubtedly. Hence, geopolitical risks such as banning coal import and levying higher customs exist constantly. Maintaining respective China and India a relatively small portion of coal sales buffers the group when policies turn. 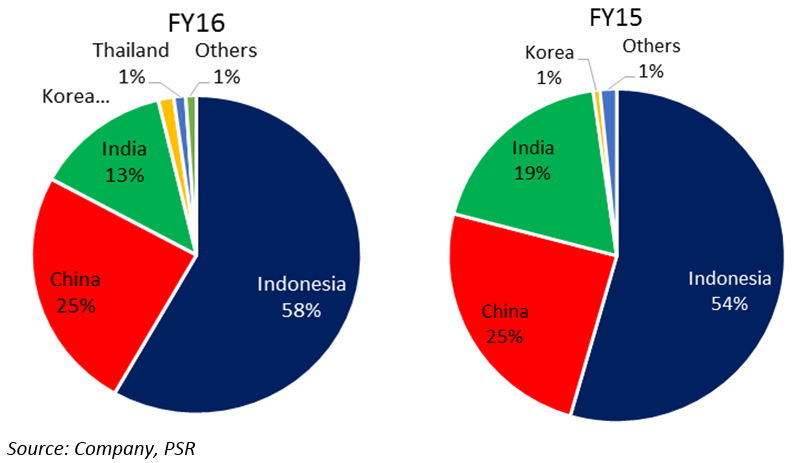 Shown in Figure 26, in FY16, GEAR produced 9.5mn tonnes of coal, out of which 7.5mn tonnes and 2 mn tonnes were from BIB mine and KIM mine respectively. As of 1H17, the group completed 43% of the FY17 target production of 14mn tonnes (BIB: 12mn tonnes, KIM: 2 mn tonnes). Moving forward, GEAR aims to achieve 34mn tonnes of production by 2021, and more importantly, the plan only takes BIB mind and KIM mine into account. Outputs from the rest mines, especially the recent being acquired (BSL), will be icing on the cake. Therefore, it is expected to realise production expansion in the near term. 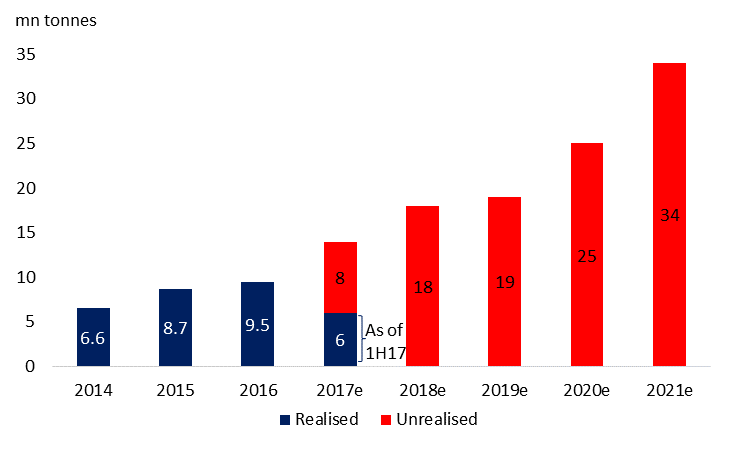 As of 1H17, GEAR’s coal production was mainly from BIB mine where average life-of-mine strip ratio is estimated at 4.1 (4.1 tonnes of overburden are removed to extract 1 tonne of coal). The low rate level results in low production cost, shown in Figure 27. The gap between cash cost (Adj: adjusted) and average selling price (ASP) has been widening, because coal price bottomed out in 2016 while operating expenditures only grew mildly. ASP tracks the volatile International coal price which is beyond company’s control, but mining costs are comparatively stable. Low cash cost benefits GEAR in two ways, enhancing profit margin when ASP soars and buffering the downturn when ASP collapses, and the latter merit is important for sustainable growth in the long term. 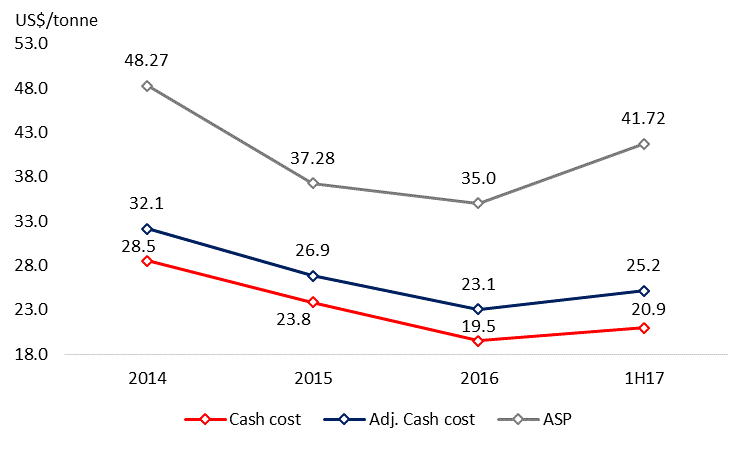 How do we view GEAR

The outlook for GEAR is bright. In the short-term, it will ramp up production capacity to take advantage of favourable macro conditions, including a boom in domestic electrification as well as coal price recovery. Within the next couple of years, we are positive that the group is able to deliver stable growth. In addition, GEAR also benefits from diversification of end-customers as well as trading partners, which lower the geopolitical risks and trading risks. In a long-term view, the mining operation is backed by abundant coal reserves that reach approximate billion tonnes once the acquisition of BSL mine is completed. The total reserves are expected to support the ongoing production for several decades if GEAR produces 20mn tonnes per annum. Moreover, the average life-of-mine strip ratio for BIB mine, the key mine as of now, is low, resulting in low mining costs that provide more room for the profit margin.

(This report is part of the Coal Sector report published on the same day.)