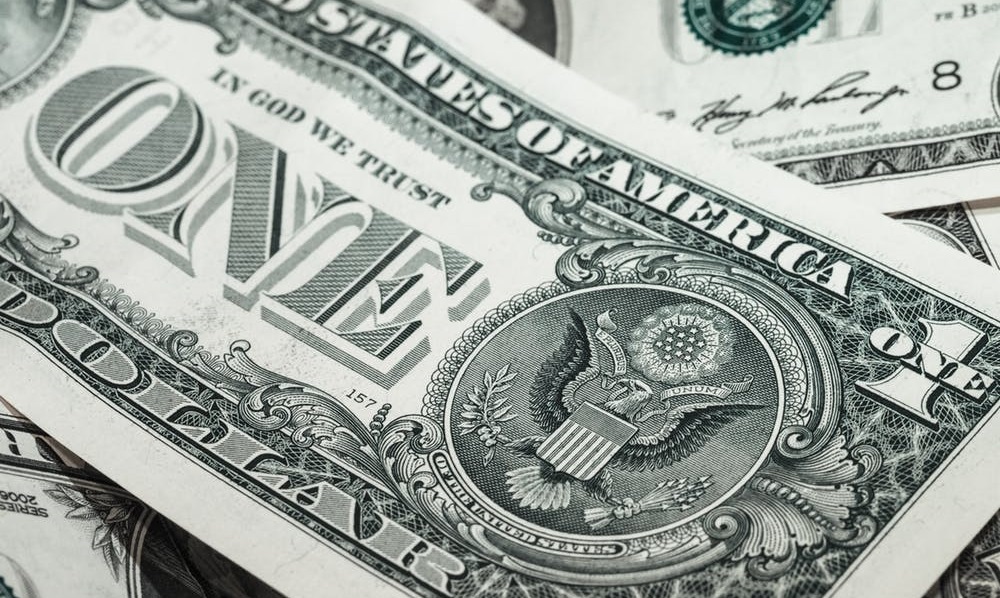 As suggested in a previous report by our technical analyst, we believe there is still room for the USD to fall. In summary, the dollar index (DXY) has reached a 98 months cyclical top in January 2017. A massive selloff of 12% to 42% will usually follow after the cyclical top.

DXY: The US Dollar Index is an index of the United States dollar relative to a basket of foreign currencies, mainly against the Euro, Japanese Yen, Pound Sterling, Canadian Dollar, Swedish Krona and Swiss France.

There is a common misperception that the USD will strengthen as the Federal Reserve (Fed) embark on a tightening monetary policies regime. However, history dispels this misconception as shown in Figure 1. USD movement is not consistent with monetary policies but relates more to U.S. aggregate saving and the confidence in its current Administration. 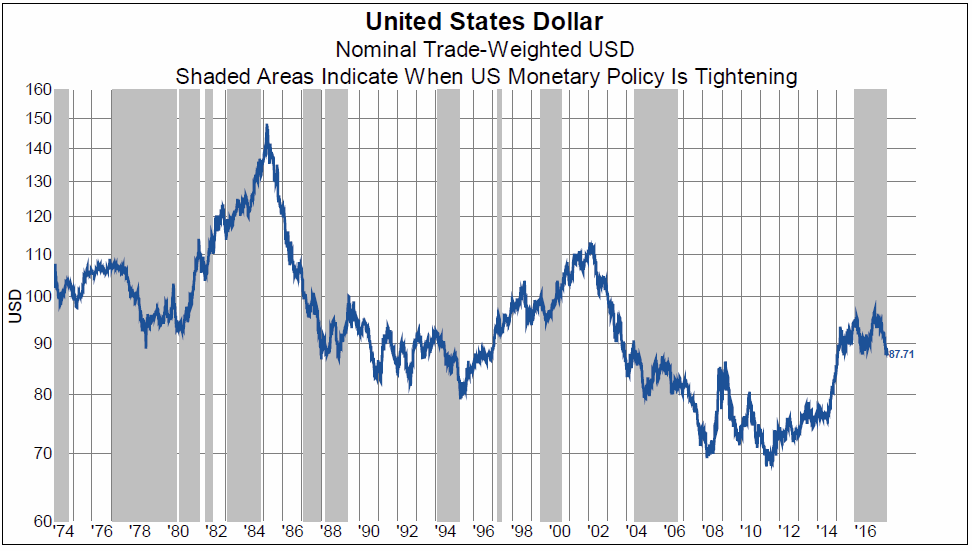 Loss of confidence in the U.S. Dollar

We believe that the loss of confidence in the dollar is structural and this might mark the end of the U.S. dollar hegemony.  As of today, U.S. has never been more leveraged than any point in their history. The private household debt and the national public debt are at record high, easily surpassing the historical high of the Great Financial Crisis (GFC) in 2008.

Although total mortgage loans were pared down briefly during the years after the GFC, other non-housing debts have started to gain traction. Auto loan debt, student loan debt and credit card debt have reached unpreceded record size. However, unlike mortgage loans which have the underlying property as collateral, auto loan, credit card debts and student debts are unsecured debt. This means that there will be no salvage value if these unsecured credits were to default.

This debt overhang handicapped the U.S. economy from expanding through further credit expansion. 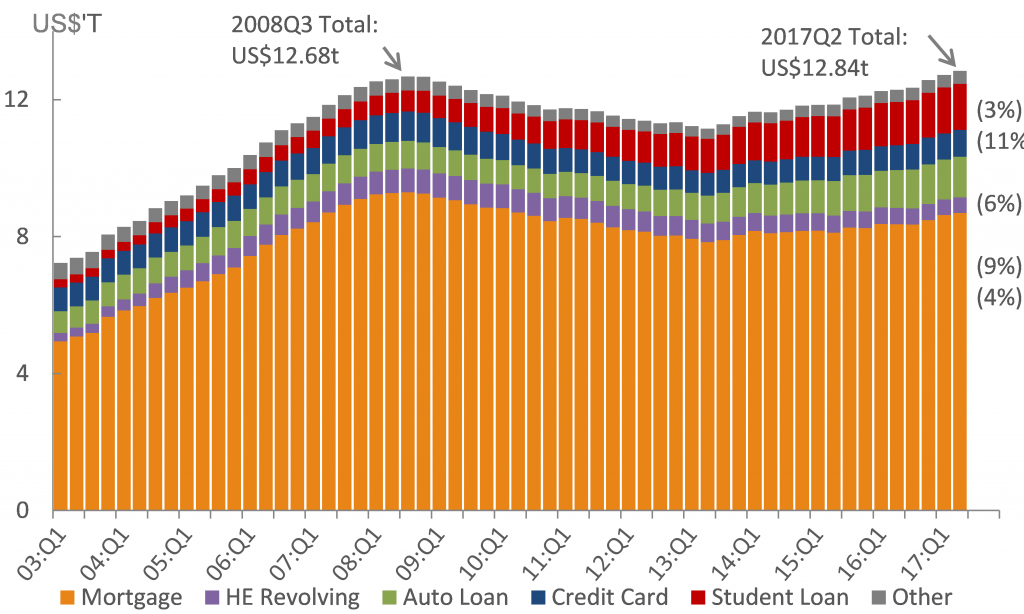 A bill was passed on the 8 of September, postponing the debt ceiling negotiating to December 2017. The bill raised the nation’s borrowing limit for the next three months, funding the government and providing US$15.3 billion in aid for victims of Hurricane Harvey.  The bill sailed through Congress with an overwhelming vote as no member of Congress wanted to be blamed for delaying aid relief to the victims of Hurricane Harvey. 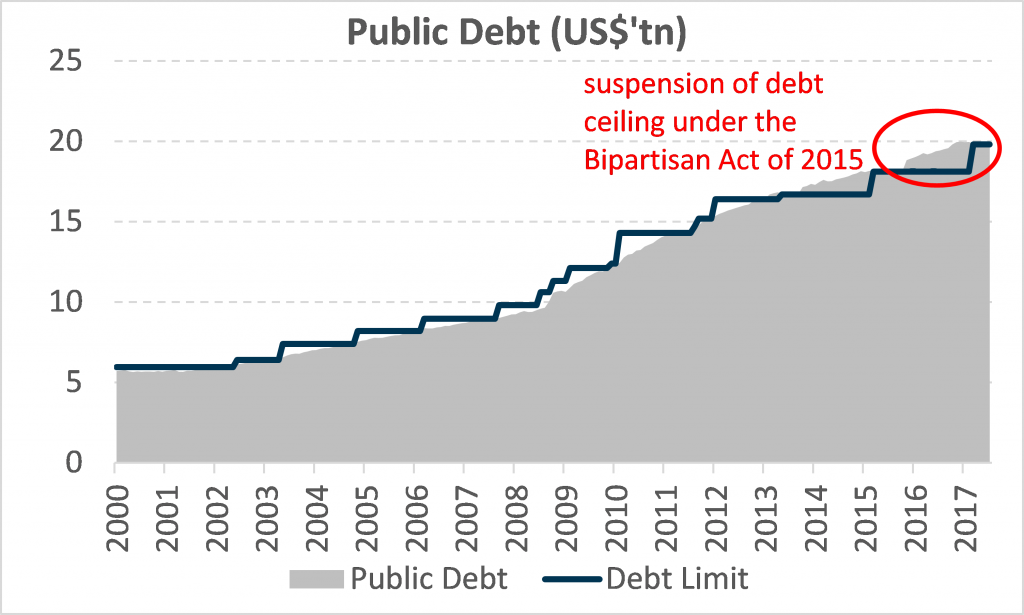 The congressional debt ceiling brinkmanship in 2011 had led Standard & Poor’s to downgrade the credit rating of the United States. This time around, Moody Credit Rating Agency has also hinted that the 2017 debt ceiling impasse may instigate the agency to downgrade the credit rating of U.S. together with the outlook for U.S. economy. However, they added that prioritising the liabilities of U.S. Treasury might help to mitigate the situation.

If Moody were to downgrade, they would be the second major rating agency to rate U.S. credit at AA+ following Standard & Poor’s downgrade in 2011. Although U.S. will still hold on to their investment grade rating, this will inevitably raise questions about U.S. credibility. This can be damaging for the Dollar.

Overleverage does not end well with rising interest rates

In this period of high indebtedness, U.S. Fed is trying to normalise monetary policies by raising the interest rate. Theoretically, an increasing rate environment tends to lead to a higher default rate as interest expenses grow larger as a percentage of income. Empirically, this was proven to be true when the Federal Reserve started raising interest rate in May 2004. The tightening monetary policies ultimately lead to the subprime crisis and GFC. We believe the moral hazard of “easy money” will surface again during this new period of interest rate hike cycle.

We can usually infer the stability of a nation from the political party in power. And the high turnover in the Trump administration has left many doubts on the ability of the administration to lead the nation.

Since President Trump took over the white house, there has been a number of personnel that have either been fired or decided to resign from his/her post. Among this personnel, the more notable leavers were;

From the list above, it is clear that it was not the junior staffs that were leaving but rather, high-profile positions that were vacated. Such “easy-fire” policy had not been observed in prior presidential terms.  The high staff turnover has shaken the confidence for the administration.

In addition to staffing problem, the Trump’s administration has disappointed on his campaign promises as well. They had lost the vote in repealing and replacing the Affordable Care Act aka “Obamacare”. Until now, there has been no substantial tax reform proposed by Trump and his administration too. More worring is the ongoing Special Counsel Investigation on the link between Trump’s 2016 presidential campaign and the Russian government. The worst case scenario will see an impeachment of Donald Trump.

Although it is just eight months into his Presidential term, it is safe to say that Trump has not met the expectation of the public. This has anecdotally affected Trump’s approval rating with a causation of a weaker U.S. dollar.

Figure 5: Confidence in new administration is waning and it is affecting the U.S. dollar 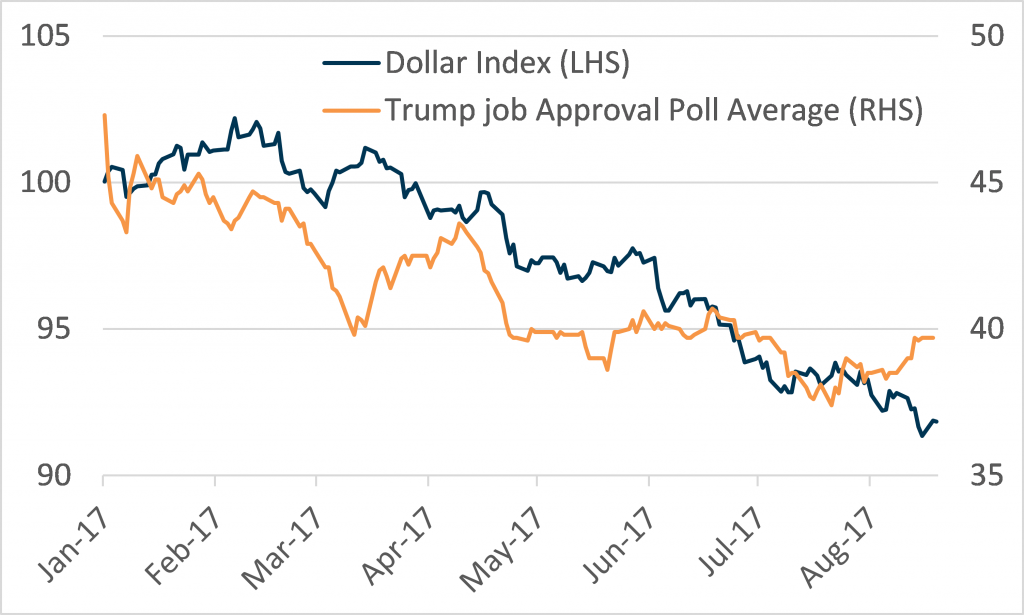