CES launched Grandeur Park Residences in March 2017 and sold almost 72% out of a total of 722 units till date. With no other new projects planned for launch in the Tanah Merah district, we expect CES to sell more units in the next few quarters. CES has completely sold its 60%-owned High Park Residences, a 1,399 unit condominium, as at 1Q17. It has c.60% remaining revenue to be recognised till the project obtains TOP status in FY19. CES’s other high end 128-unit condominium project, Fulcrum, is 78.9% sold amid promotional deferred payment schemes that were introduced in the quarter. With an increased sales momentum in Fulcrum units, we remain optimistic that the Group will be able to clear the remaining 28 units by end-2018 before qualifying certificate extension charges are due.

The Group sold three units of Willow Apartments, a 64-unit, residential apartment project in Doncaster, Melbourne, where it is 57.8% sold as at 1Q17. The slower sales performance was attributed to softer demand in the Melbourne property market, stemmed from cooling measures that were enacted by the Australian Government in a bid to curb the sharp rise in housing prices in the recent years. Consequently, we expect sales for the remaining units in Willow Apartments to remain slow. The development is already more than 50% sold and the Group still has about 12 months before the project is handed over sometime in FY18. In response to the weaker market, CES has delayed its launch of a residential apartment project in South Melbourne to 2H17. The Group continues to await for “further hearings and determination” of the litigation issue at its fully sold Tower Melbourne residential development project. We have not factored any development surplus into our RNAV estimates from Tower Melbourne development, and will not be doing so until there is more clarity of the case.

We are upbeat on CES as it will be booking in revenue from the mostly sold projects that are currently being developed. The newest HDB contract win is timely as order book declined due to the completion of one of its construction projects during the quarter, and boosted the Group’s order book and revenue visibility to end-2019. The vibrant property sales in Singapore will better help realise our RNAV estimate target of CES and will outweigh the slowing market in Melbourne albeit considerably small (less than c.10% of RNAV) based on the value of unsold units and land cost of unlaunched developments. We upgraded our rating on CES to ‘Buy’ and increased our TP to S$0.90 (previous S$0.87) based on our FY17 RNAV estimates.

During the quarter, CES has completed a HDB project at Bukit Batok (N1C13 and N2C23) which has led order book to decline to S$457.2 million from S$537.4 million. The Group has bagged a new contract (Bidadari Contract 8 and 9) worth S$110.8 million from HDB involving the construction of nine blocks of flats and other community facilities for a period of 43 months. Including the new contract win, order book has been lifted up to S$568 million from S$457.2 million and will last till end-2020. We are expecting the Group to continue tendering for public housing construction contracts where the area remains to be their core expertise, however, the Group mentioned that they will also participate in public sector infrastructure projects. 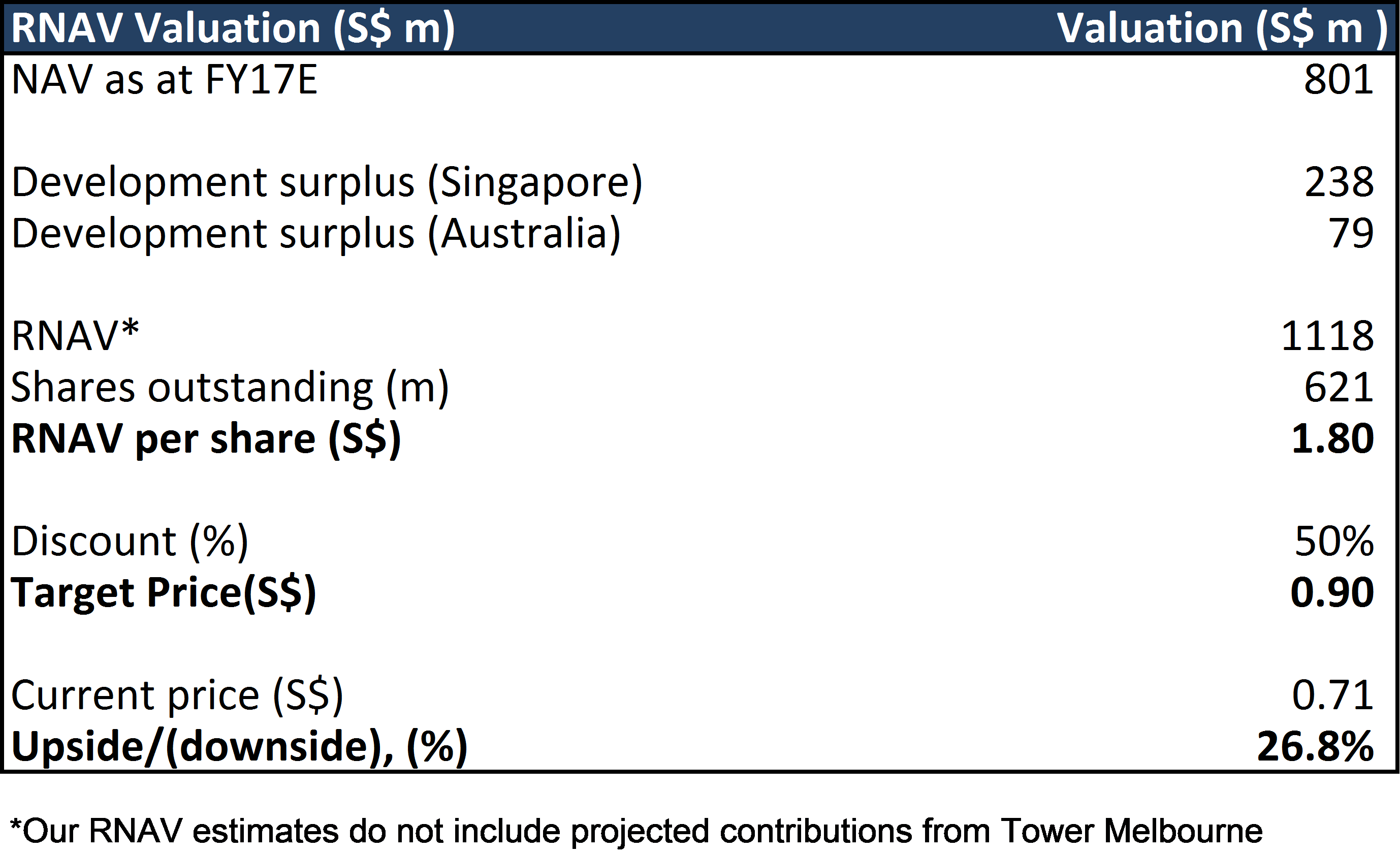