Blackgold Natural Resources (BNR) was formerly known as NH Ceramics. On Mar15, it acquired three coal concessions for US$150mn through the issuance of 635.6mn shares at S$0.295 each. The most valuable concession is Samantaka Batubara (SB), its only coal producing mine, has reserves of 147mn tonnes. The other two concessions are at the exploratory stage.

We initiate with Trading BUY and target price of S$0.16. Positive news-flow from the surge in coal sales and award of Riau 1 project will be the major share price drivers for BNR. At our target price, BNR will be trading at 10x PE FY18e. This will be in line with regional peers.

Blackgold Natural Resources (BNR) was formerly known as NH Ceramics. On Mar15, it acquired three coal concessions (Figure 29) for US$150mn through the issuance of 635.6mn shares at S$0.295 each.

The most valuable concession is Samantaka Batubara (SB), which is its only coal producing mine and has reserves of 147mn tonnes. The other two concessions are at the exploratory stage.

Figure 29: Of the three concession, only SB has reserves and production 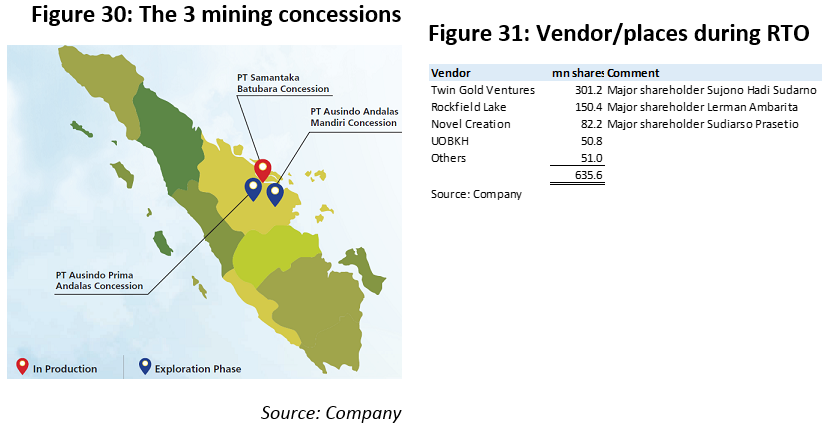 SB only started production in FY16 with 30,000 tonnes. We expect this to spike to 1.3mn tonnes in FY18e. A risk to production will be further delays by customer Santosa and Soma. Both are earmarked for power plants.

Over the last 12 months, SB has secured two major customers – PLN Tenayan and Semen Padang (Figure 32). We do not rule out the company securing even more customer or increased demand from existing customers, in view of the increasing demand for power in Sumatra. Power consumption in Sumatra has been growing 9% p.a. the past five years. This is expected to rise even faster to 11% p.a. from 2017-2026 or double in six years, according to PLN (RUPTL).

The big opportunity will be the award of Riau 1 power project. BNR will enjoy two sources of profits from Riau 1 mine-mouth. The first profit will be supplying on an exclusive basis, 3.5mn tonnes coal per annum to the power plant, for 30 years. This will triple 2018e production*. Secondly, BNR is able to enjoy profits generated by the Riau 1 power project itself.

* Based on the Independent Qualified Person’s Report (“IQPR”), SB can report US$30m PATMI with Riau 1 coal supply (but this excludes financing cost). 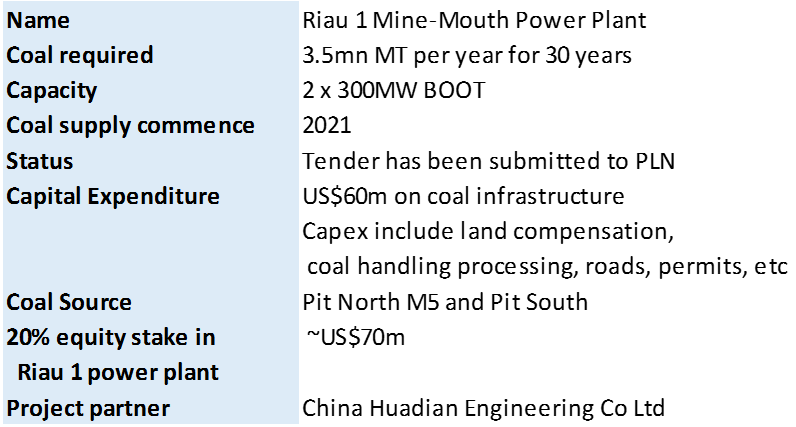 The largest risk to our investment thesis is funding of Riau 1 opportunity. There will be two areas of funding required. Firstly, to expand coal capacity by 3.5mn tonnes, BNR will require capital expenditure of around US$60mn. This was highlighted in the IQPR (10 Aug17); Secondly, BNR intends to take a stake in the Riau 1 power plant project. There have been no details of the cost of the project. Our estimates are based on other power plant projects is a capital expenditure of around US$900mn. Assuming 30% equity funding for Riau 1 and BNR takes a 20% stake, it will cost BNR US$54mn. 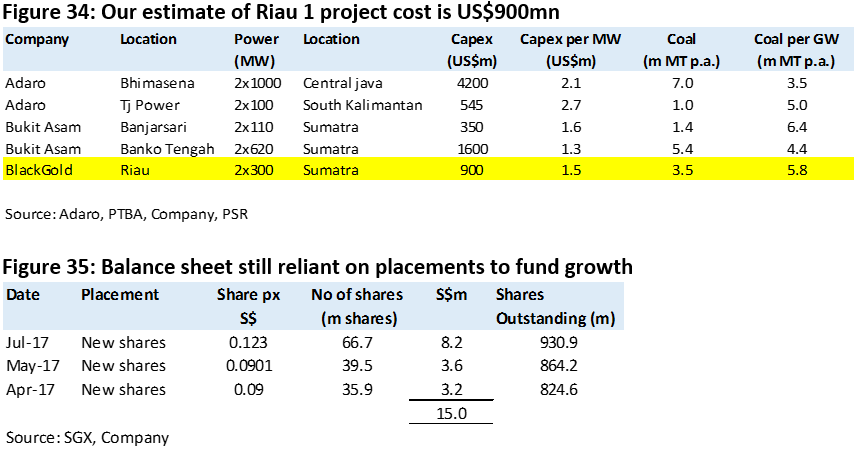 (This report is part of the Coal Sector report published on the same day.)