“Turning Into Ukraine’s ‘Distant War’ and a Possible Recovery in Japan Inbound?”

The Russian invasion of Ukraine raged throughout the stock market as well. On 21/2, Russia approved the independence of Donetsk People’s Republic and Luhansk People’s Republic in the Donbas region of eastern Ukraine and dispatched special troops called the “peacekeeping forces” on the 24th for the purpose of safeguarding residents. An actual invasion began which led to a military operation. On the afternoon of the 24th, it was also reported that attacks by the Russian army were made on the capital Kyiv and the Nikkei average ended up falling to 25,775 points. At that point, perhaps the stock market had attempted to incorporate the possibility of an increase in concerns of risks spiralling, such as by expecting the scenario of U.S. President Biden removing the Russia from the international payment network SWIFT (The Society for Worldwide Interbank Financial Telecommunication) as a form of economic sanction on Russia and the subsequent financial system pandemic from a credit default for Russia, etc. After the end of trading hours in the Japanese stock market, the WTI Crude Oil Futures price rose sharply to exceed 100 dollars a barrel last since 2014 and the CMX Gold Futures price also soared to 1,976 dollars an ounce.

In response to this, the trend reversed as a result of economic sanctions announced by U.S. President Biden not including the removal of Russia from SWIFT, which were limited to sanction measures on 4 new banks that include Russia’s No.2 bank, VTB bank, and export regulations on high-tech products as well as speculations on whether the situation will cool off in the short-term due to the Russian army’s oppression of Kyiv, etc. Around 5am Japan time on the 25th, there were violent price fluctuations, such as the price of the WTI Crude Oil Futures falling to the 92 dollar-level and CMX Gold Futures falling to around 1,900 dollars. For the time being, the stock market perceives the Ukraine situation to be an issue that is focused on the Euro area, and perhaps there is now a greater possibility of Japan and

Asia, which do not have stakes as countries involved, finding opportunities for a buyback from a selling lead in the U.S. from next week onwards as a “distant war”.

On the 21st, the U.K. announced a complete end to COVID-19-related regulations in England. The rule for the mandatory isolation of those infected have also been removed from the 24th. Prime Minister Johnson declared that based on having achieved sufficient immunity levels in its residents, it has become possible for a full transition from infection countermeasures centring on government intervention to a policy focusing on vaccination and treatment. In response to the strong performance in accommodation demand in the year-end holiday season in Europe and the U.S., the FY2021 Oct-Dec net sales for 3 U.S. hotel chain giants: Marriot International, Hyatt Hotels and Hilton Worldwide Holdings, have increased across the board by more than twice the same period the previous year. If the number of infections decrease in Japan as well, there is a possibility of the emergence of anticipated movements, such as of the recovery in inbound demand from overseas with a focus on tourism and leisure-related stocks, etc. According to a joint survey between the Development Bank of Japan and the Japan Travel Bureau Foundation, Japan is the No.1 country people from Europe, U.S. and Australia want to visit after COVID ends. 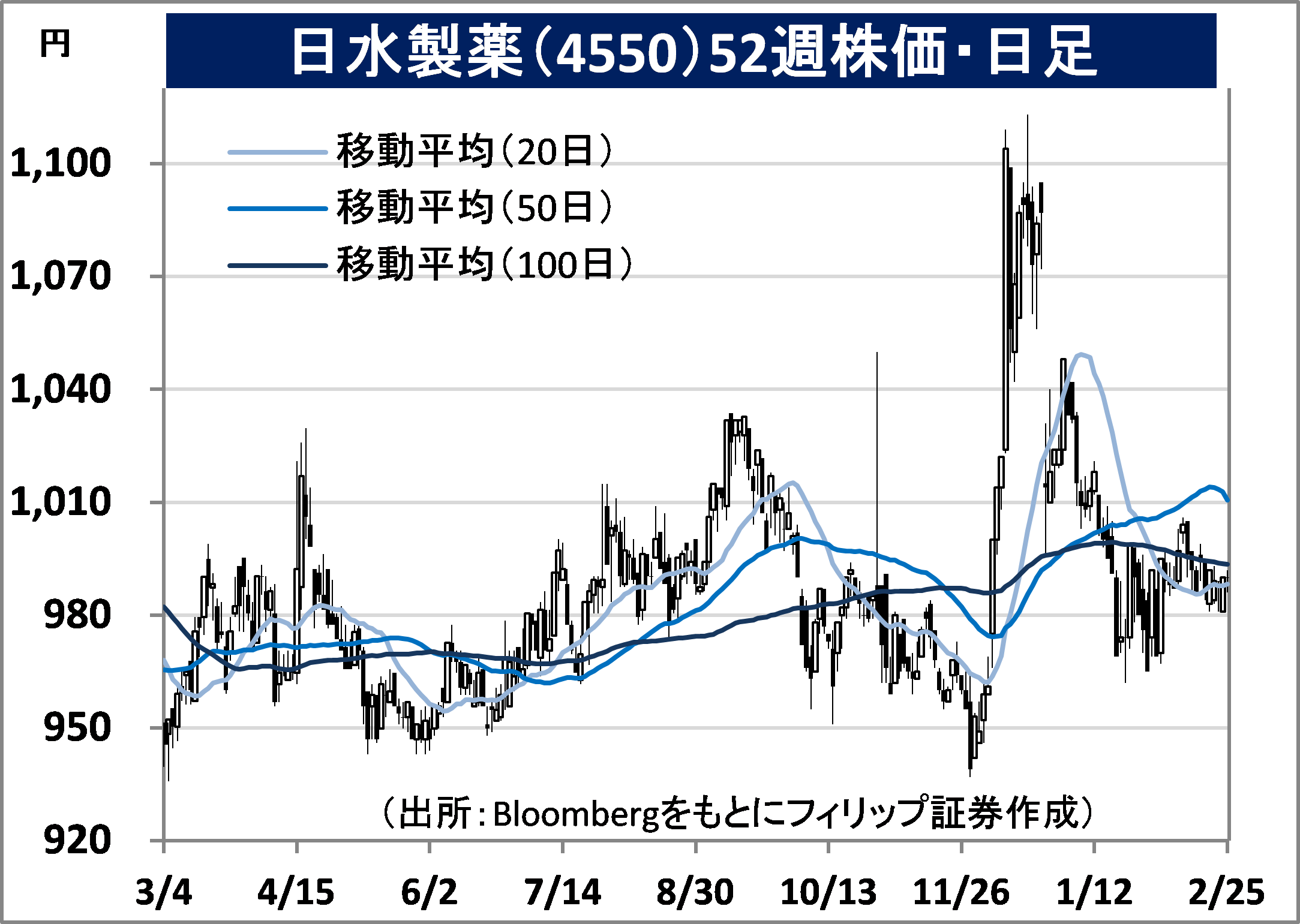 ・For 9M (Apr-Dec) results of FY2022/3 announced on 27/1, net sales increased by 39.0% to 11.609 billion yen compared to the same period the previous year and operating income increased by 2.2 times to 1.209 billion yen. In addition to Shimadzu (7701) and Tosoh (4042)’s COVID DNA reagent and Shimadzu’s DNA reagent used for testing the Omicron variant, those related to cell culture in the regenerative medicine field have been strong.

・For its full year plan, net sales is expected to increase by 19.9% to 14.35 billion yen compared to the previous year and operating income to increase by 57.8% to 1.27 billion yen. Growth is expected in functional displayed food which blends DHA (docosahexaenoic acid) and EPA (eicosapentaenoic acid) nutrients that are effective in reducing triglycerides and are commonly found in the fat of bluebacks. Also, since there is a high percentage of trading with the parent company, a capital review is expected from the perspective of the issue of parent-subsidiary listing in corporate governance. ・For 9M (Apr-Dec) results of FY2022/3 announced on 14/2, net sales increased by 9.0% to 125.613 billion yen compared to the same period the previous year and operating income increased by 14.9% to 16.993 billion yen. In addition to orders exceeding production quantities due to a stop in supply following the unauthorised production of drugs by the largest generic drug giant, Nichi-iko Pharmaceutical (4541), etc., the anticonvulsant (E Keppra) which launched in December has contributed.

・For its full year plan, net sales is expected to increase by 7.6% to 166.7 billion yen compared to the previous year and operating income to decrease by 3.1% to 19.3 billion yen. Company dividend forecast was raised to increase by 16 yen to 60 yen (original plan 51 yen). With the persistent uncertainty in generic drug supply, their policy is to construct a 3rd solid preparation block in their Yamagata factory. In addition to room for expansion in the overseas market at 22% in overseas sales distribution in 9M, a synergistic effect is expected from the acquisition of a health-related company.