UOB visualises its future customers to come from its ASEAN franchise, which has a rising young population. Around 60% of the ASEAN population is under 35 years old, and 52% of the population owns a smartphone. As customers’ needs evolve, there’s a need for both digital services as well as physical branches. When it comes to higher value transactions such as mortgage loans, wealth management and SME transactions, less than 25% (Figure 1) of UOB’s customers are willing to transact online because of the sense of security of having someone to talk to before making a decision.

Despite intensive digitalisation efforts, offline channels remain crucial in UOB’s customer engagement journey. Digitally is not the only way customers want to be served, more than 56% of UOB’s customers prefer physical interaction for wealth, deposit and loans transactions (Figure 2) when making purchasing decisions. Online channels are preferred in gathering information during the run-up before the actual application stage.

Figure 3: Omni-channel is rising in customer engagement and revenues

UOB shared its designs for customer-centric solutions by making banking simpler with digitalisation. The newly launched digital bank called “TMRW” in Thailand targets the middle-affluent, mobile-savvy millennials who want to be continuously engaged. Products offered at the moment consists of payments, deposits and unsecured credit. Authentication can be completed within 10 seconds with a match of chip to government data. The steady CIR of TMRW is approximately 35%. 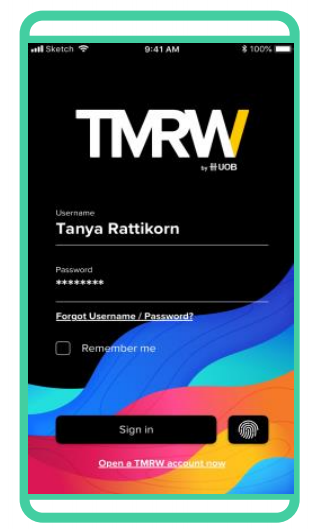 Examples of ecosystem partnerships include bancassurance with Prudential, strategic alliance with Grab and partnerships in property and car ecosystems. M1 is the first telco in Singapore to offer paynow as a mode of payment. PayNow allows people to transfer money through their bank’s mobile or Internet banking service to a registered recipient with just their mobile phone number, NRIC or FIN. Scoot will also be the first airline in Singapore to provide paynow as a mode of payment, which means lower booking fees for customers.

Cost-to-income ratio to decline close to 42% in 3 years. UOB’s CIR as of 1Q19 was at 44.6%. Improvement of productivity will start from Singapore where processes can be improved easily by reducing costs to acquire, serve and engage with digitalisation, before rolling out in the region.

ROE targeted to reach closer to 13%, depending on how fast UOB scales up its regional operations.

The main contributors to market volatility in 2019 will likely come from geopolitics, global trade tensions and a synchronised global slowdown in sentiments.

Trade war – With the resurgence of trade war concerns, there seems to be a growing sentiment amongst corporates (with business in technology and electronics) to shift their supply chain out of China into ASEAN (Figure 8). A shift in the supply chain does not happen overnight, and many corporations are exploring the idea for now. A natural consideration would be countries such as Vietnam, Thailand and Indonesia where labour is cheap. UOB is well positioned with a wide SEA footprint to serve both suppliers and distributors.

SEA is the third largest population globally after China and India with a young demographic (384mn people below 35 years old). Indonesia, Thailand and Malaysia are UOB’s key markets. UOB’s Greater China proportion of spoke distribution reduced over the years with a broader focus on SEA (Figure 9).

Maintain ACCUMULATE with an unchanged target price of S$30.90 based on the Gordon Growth Model. We maintain our existing earnings forecasts.