UG Healthcare Corporation Ltd – Great quarter though ASPs are trending down May 14, 2021 732 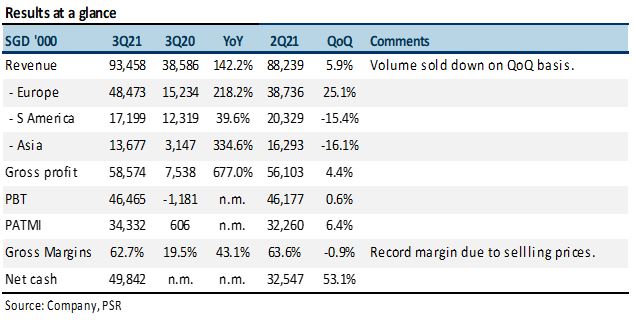 + Stellar gross margins. Gross margins more than tripled from a year ago to 62.7%. QoQ, margins were moderately lower due to higher raw-material costs.

+ Huge operating leverage. No details on operating expenses were provided. Our estimates are based on the difference between PBT and gross margins. Operating expenses – including associate income – were around 13% of 3Q21 revenue. This was above our modelled 14.7%. Higher prices have not lead to an equivalent rise in administration or marketing expenses. .

– Shipment delays persisted. Container shortages are stretching out delivery times. Shipments that typically take one month have extended to three months. The worst hit are countries such as Brazil where freight rates are lower than in developed countries such as the U.S. and Europe. There wil delays in recognising revenue and more working capital has been tied up as inventory.

With glove prices trending down, buyers will not hold much stock. Some customers are already de-stocking from two months’ inventories to just a week. De-stocking plus aggressive pricing by manufacturers from China have created a peak in glove prices. China’s nitrile producers are new with less established distribution channels. They are offering lower prices to penetrate new markets and expanding aggressively. Manufacturers in Malaysia and Thailand are lowering prices to maintain their distributor customers.

UG’s longer-term goal is to build up its customer base, pricing and brand name in its key markets. For instance, a 10-15% pricing premium will yield higher margins and could defend the company against competitors that either sell at or below to gain ground with customers.

UG is also on track to expand capacity by 58% from 3Q21’s 2.9bn to 4.6bn in FY22. Net expansion is 1.7bn, with 500mn already commissioned in April and the remaining 1.2bn to begin from July 2021. Our FY22e revenue growth forecasts are premised on this surge in capacity. Plans for another factory after this phase will be announced when they are finalised.

Our target price for UG is set at a 30% discount to the Big 4 glove makers. Historically, UG’s discount was around 40%. As industry valuations are about 10x P/E, our target P/E for FY22e is 7x, translating to a target price of S$0.85.

We raise FY21e PATMI by 7% to S$115.4mn for higher margins and lower operating expenses. FY22e PATMI is lowered by 17% to S$74.7mn as we cut gross margins by 5% points to 37%. This is around 40% below the margins in FY21e as build in a buffer for uncertain glove prices. The jump in capacity plus exposure to low-penetration markets such as Brazil, China and Africa should enable UG to support revenue growth.