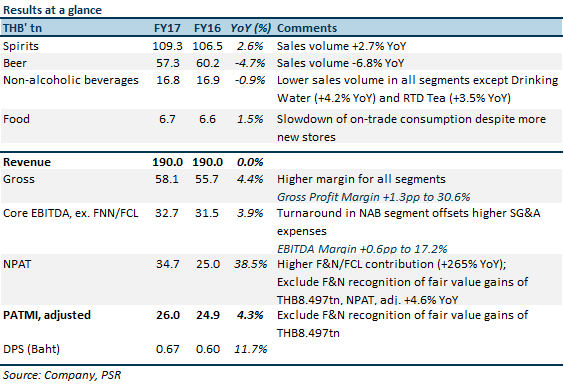 The one-year long mourning period and the implementation of new excise tax act in 16 Sep-17 dampened consumer spending. This was partially mitigated by a short-term spike in Spirits’ sales volume as agents and retailers stocked up two weeks before the excise tax increase. Spirits’ sales volume grew 28.8% YoY in 4Q17 after a slow 9M17, which -4.1% YoY. Spirits is the largest revenue contributor (58% of FY17 sales).

ThaiBev had adjusted its product prices to cover the cost from both new alcohol excise tax and the first-ever sugar tax on non-alcoholic beverages. While overall cost trends are stable, management plans to review its pricing strategy in FY18 to expand margins.

FY18 outlook remains positive. We expect on-trade consumption should turnaround in FY18 after the effect of mourning period in Thailand subside, and as a broader economic recovery takes effect in Thailand.

Thai economy grew 4.3% YoY in 3Q17, its fastest pace under the military regime. The official full year GDP growth forecast was revised up to 4% from 3.5%. Expansion sustainability hinges on recovery of domestic factors. High household debt and prolong weak agricultural prices erode consumers purchasing power, particularly the low to middle-income group as well as the farmers. However, we expect the growth momentum in Agriculture sector to extend into 2018, lifting the purchasing power of farmers. Thai government expects GDP to grow 3.6-4.6% in 2018, supported by higher government spending and FDI on the back of impending elections.

Upgraded to Buy with higher SOTP-derived TP of S$1.18

We rolled over our valuations to FY18e, taking into considerations of the potential earnings from its new revenue stream from Myanmar’s Spirits business, as well as the new loans to fund its acquisition spree.  We remain optimistic of a recovery in consumer sentiment in Food & Beverages. We are also positive that the Group could further expand its margin via better pricing in FY18. Any acquisition navigating the Group closer towards realizing Vision 2020 could act as a catalyst for re-rating.