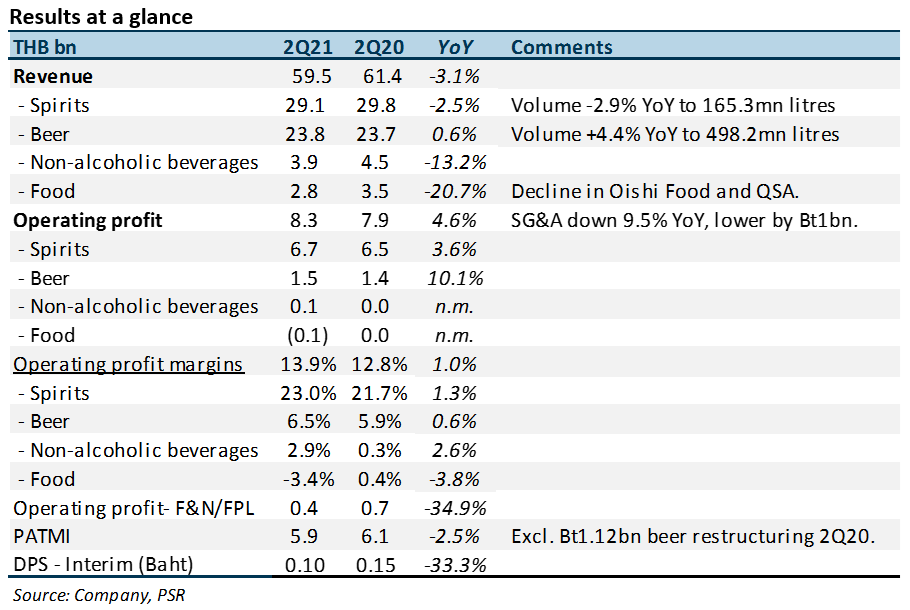 + Stable spirit sales in Thailand. Spirit sales volume was down 2.9% YoY in 2Q21, dragged down by a mid-teens decline in Myanmar*. Volume in Thailand was flat, aided by farmers returning home from the cities and the company’s distribution strength upcountry. Myanmar faced huge disruptions from logistics, material shortages and a banking system that was shut. Transactions had to be conducted entirely in cash, even employee wages.

*Spirit sales in Myanmar are from its 75% stake in Grand Royal Group, the largest whisky player in the country, acquired in October 2017. In FY20, Grand Royal contributed Bt1.25bn to group PATMI or 5%.

+ Aggressive cost-control. SG&A was down 9.5%, a huge Bt1bn decline. Spirits and non-alcoholic beverages led the cost cuts, down 10% and 16% YoY respectively or a combined Bt640mn. Spending on events and brand-building was curtailed.

– Lockdown’s impact on domestic sales. A resurgence of cases and lockdowns in Thailand such as the closure of entertainment outlets and prohibition of alcohol in restaurants hurt beer and food revenue. In contrast, spirits are consumed predominantly off premises. Beer volumes in Thailand declined 9.5% YoY in 2Q21. Meanwhile, food revenue slumped 21% YoY and net losses widened.