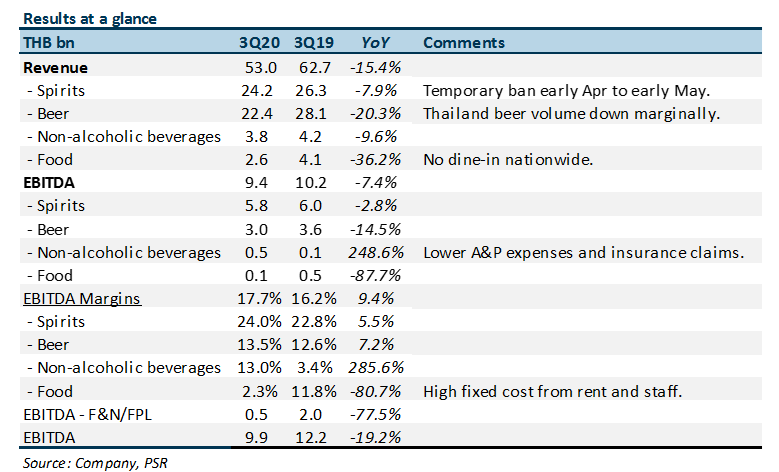 + EBITDA margins expanded despite the drop in revenue. Revenue was down 15% YoY but EBITDA margins managed to expand due to aggressive cost-cutting especially in marketing and promotion expenses. EBITDA for the key spirits business only fell 3% YoY.

– SABECO is the weakest link. In the 3Q20, beer volumes contracted almost 20% due to SABECO. Domestic beer volume declined only marginally and market share is at a record high. The regulatory ban on drink driving continues to curb beer consumption in Vietnam.

Post the alcohol ban and temporary closure of entertainment venues and restaurants in Thailand, spirit sales have recovered most of the losses in April.  As restaurants and entertainment venues reopen, we expect a recovery for THBEV operations in 4Q20. Beer sales in SABECO remains a concern, as the impact from regulation will weigh on consumption in the medium term.

We maintain our BUY recommendation. FY20e PATMI is cut by 11% as we expect SABECO beer sales to remain sluggish. We are rolling over our  target 18x PE to a normalised FY21e earning.