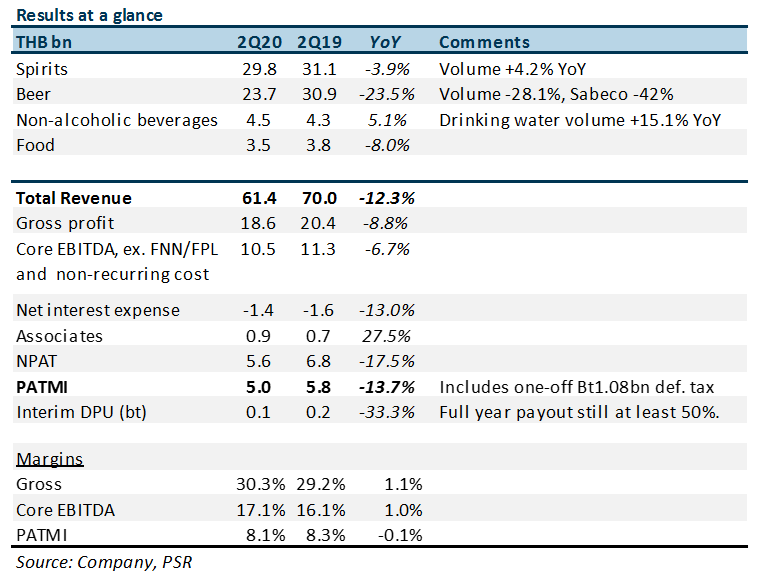 + Margin stable for spirits business despite weaker volumes. Operating profit for spirits business was flat YoY at TBH6.46bn despite the fall in revenue. The expansion in margins was due to a 10% YoY decline in distribution expenses to TBH1.69bn. Spirits PATMI was up 9.5% YoY to TBH5.35bn and now accounts for 88% of group earnings (Figure 1).

– Sabeco will remain problematic for a few quarters. Sabeco volumes have been punished by three key events: fake new, decree 100 and Covid-19 economic hit. Decree 100 in Vietnam introduced stiffer penalties for drunk driving, ban advertising of alcoholic beverages (between 6pm to 9pm). This has hit the on-trade (aka on-premises) (i.e. pubs, clubs) consumption of beer more than expected.

FY20e will be a weaker year for THBEV. Softer economic condition and a collapse in on-trade consumption of alcohol will be the two largest negative impact on revenues. The only positive offset on earnings margins will be lower advertising and promotion activities.

The spirit business in Thailand will remain resilient despite the temporary ban enacted in April. Off-trade consumption (i.e. consumed at home) of spirits contributes approximately 80% of spirit sales and less impacted by Covid-19 social distancing measures. Demand is more linked to farm income levels and overall health of the economy.

More problematic for THBEV will be Sabeco. The stiff penalties for drunk driving in Vietnam will hurt the business more permanently. Some on-trade volumes will be converted to off-trade but there may be some volume slippage is expected. Off-trade margins will be lower as on-trade bottle can be recyclable, thereby reducing cost. Although off-trade volume through modern retail can be higher, the higher percentage of off-trade sales will results in weaker margins.

We maintain our BUY recommendation. We favour THBEV for their dominant market share of around 90% in spirits. THBEV has an unassailable distribution network in Thailand with 280k direct point of sales presence and another 150k covered indirectly via agents. Another near-term lever to earning in FY20e will be a cut in advertisement and promotion expenses to defend profitability.