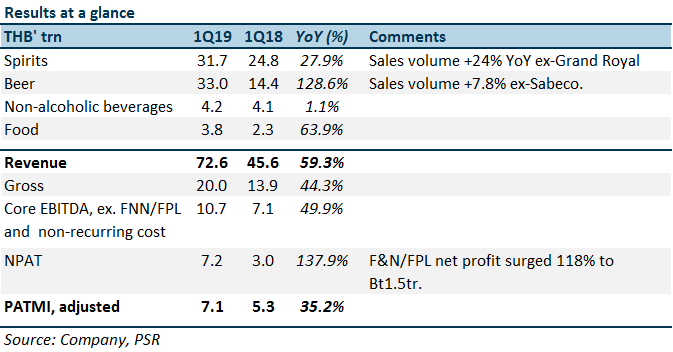 + Domestic spirits volume is up 24% YoY. Demand for spirits in Thailand surged 24%. The rise was in part due to low base after the imposition of excise tax on September 2017. This lead to front-loading of purchases in 4Q17 and reduced buying in subsequent 1Q18. Excluding the lower base, there was a recovery in demand.  More impressive was volume growth in Grand Royal whisky (Myanmar). Volumes surged 36% YoY and there is no base effect.

– Sabeco still not contributing much. Despite the consolidation of Sabeco financials and the 128% YoY surge in revenue for the beer segment, net profit for this division actually fell 54% YoY. The bulk of the 117% spike in EBITDA for beer segment was offset by the jump in interest expenses.

– Missing minority interest. There was minimal minority interest in this quarter’s results despite Sabeco consolidation. In comparison, 3Q18-4Q18 minority interest was between Bt345mn and Bt656mn. This was down to Bt64mn. The explanation given was the transition from Vietnam to Thailand accounting standards plus the recognition of bonus and social welfare fund. The size was not disclosed.

We believe there is sales momentum for the company in the coming 2-3 quarters, in particular for the spirits business that accounts for 75% of net earnings. Firstly, there is the “customary” boost in consumption in pre-election campaigning. Secondly, assuming election are peaceful, there will be grand events and celebration for the new posts. Thirdly, the coronation of new King in May will create a celebratory atmosphere, unlike the past two years. Finally, additional farm aid for rice farmers will boost their income levels especially in Southern Thailand (refer below).

Where our assumptions were wrong?

While the share price did come close to our target price of S$0.57, the turnaround in the business was much faster than anticipated. We had expected a modest recovery in farm income based on our reading of the Thailand Farm Income Index. However, the rebound in farm income was better than expected. This was in large part due to the rolling out of Bt56.5bn farm aid scheme for rice farmers that began in late Oct18. This would boost farm incomes by around Bt13,800 per farmer. This is a significant amount since average farm incomes in Thailand are Bt57,000 per annum. Another Bt5bn has been allocated for farmers in the South. This will run until Jun/Jul19.

Upgrade to NEUTRAL and increased our SOTP-derived TP to S$0.81 (previously S$0.57). Our aggressive upgrade in share price is due to: (i) We raised our earnings by 7% as we expect demand to remain vibrant over the next few quarters; (ii) We raised our SOTP valuation to the middle (from lower) EV/EBITDA band of global peers.