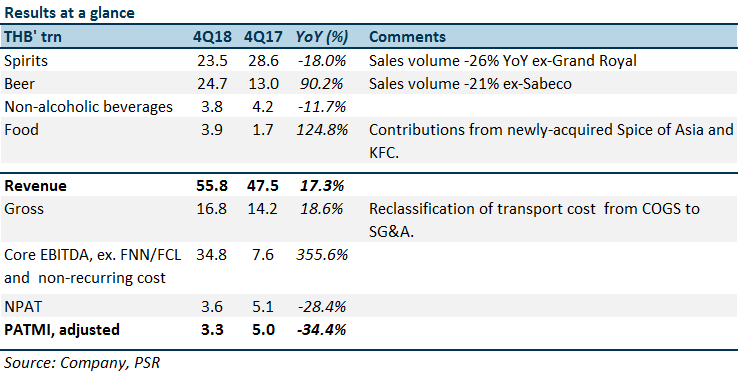 + Market share still maintained. According to management, the company is still holding unto their market share despite the intense competition. Market share for spirits market in Thailand remains a dominant 95%. Meanwhile, beer market share is around 40% in both Thailand and Vietnam.

– Spirits volume contracted. Spirits business (~80% of group PATMI) saw sales volume declining 26% YoY in Thailand.  Quarterly volumes for spirits sales in Thailand are at their lowest in more than 5-year and net profit fell 28% YoY. The reason given for the weakness in demand is due to weak economic conditions where consumers will trade down to the cheaper white spirits.

– Beer segment turned into losses despite Sabeco. Beer sales volume (excluding Sabeco) is down 21% in 4Q18. Even after the inclusion of Sabeco earnings, the beer division reported a net loss of Bt109mn in 4Q18 due to poor volumes in Thailand, surge in interest expense and weak operating margins at Sabeco. Margins at Sabeco has been hit by higher raw materials and packaging cost.

– Non-alcoholic beverage (NAB) net losses widened.  NAB net losses more than tripled in 4Q18 to Bt391mn. Losses were due to 26% YoY collapse in revenue. The key product – Oishi green tea – has seen a severe contraction in volumes since the introduction of excise taxes in Thailand. Unclear of the triggers to achieve break-even by 2020.

We have incorporated a tepid improvement in the business for FY19e. This is based on farm incomes recovering and a consumption boost from the planned elections in Thailand from 24 February 2019 onwards.

However, we believe the stock will remain weighed down by three factors;

We maintain REDUCE with lower SOTP-derived TP of S$0.57. We cut our FY19e earnings by 7%. We peg our SOTP valuations to the lower EV/EBITDA band of global peers.