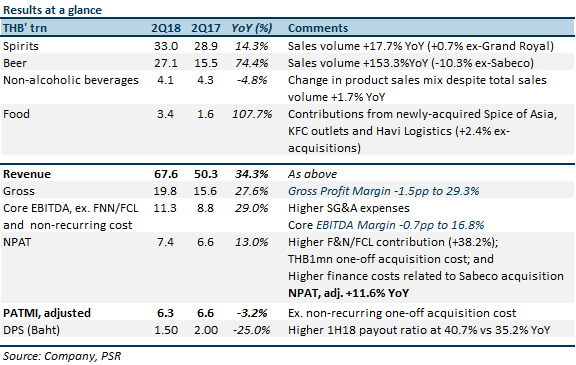 + Improved liquidity, current ratio was up from 0.88x to 1.82x QoQ. THB50bn from the bridging loans obtained to fund the acquisitions was converted into long-term debts in Mar-18. The management intends to further refinance its short-term debts to long term.

– Existing Alcoholic Beverages segment disappointed – hit by double whammy of protracted weak demand and implementation of a new excise tax. Effective from 26 January 2018, all alcoholic beverages have been slapped with an additional 2% of excise tax by law to contribute to the Elderly Fund.

1H18 Sales volume for its existing beer business was down 8.3% YoY, in tandem with the 6.7% lower industry volume turnover. However, we take comfort of its stable beer market share in Thailand at c.38%.

On-trade consumption for alcoholic beverages has yet to turnaround despite starting from a low base. While stronger Thai economy is not yet broad-based, the high household debt has eroded consumers’ purchasing power. Soft demand for alcoholic beverages in Thailand could extend for longer period. Nonetheless, we believe that the FIFA World Cup is likely to boost beer sales, not only in Thailand but also in Vietnam.

On the other hand, we do not expect gross margin to deteriorate further compared to 2Q18’s. The Group has already adjusted its Spirits prices for the additional excise tax by end Apr-18, but may refrain from increasing its Beer prices in near term, in view of fierce competition. Management also noted that pressure from domestic molasses prices seen in the past 12-months should subside in 2H18.

However, SG&A expenses should remain elevated, as advertising and promotional activities normalised to pre-mourning period level (before Oct-16).

With better clarity in 2Q18 upon conversion of short-term to long-term loans, we have adjusted for higher finance expenses, thus FY18e Adjusted PATMI to -3.9% vs previous forecast.