The above chart indicates that assets on the Fed’s balance sheet remain high. At a glance, the divergence between the Fed funds rate and asset purchases suggests low interest rates may linger on for a while.

We think tapering is unlikely this quarter as employment is still short of the 6mn jobs to be filled, compared to the strong employment before the pandemic. Add to that the threat posed by the Delta variant and the Fed is likely to wait and see.

Five-year forward inflation forecasts appear to have priced out rate hikes in the near future while the Fed funds rate target remains low. If the Fed cuts rates now, this will only severely limit room for it to cut rates further.

But the Fed itself is painting a confusing picture. First, it says it is in no rush to taper off. Yet, it is reducing purchases of mortgage-backed securities and Treasuries. To a lesser extent, its reverse repurchases are also soaking up liquidity from the open market. This has not tamed inflation but only adds to the confusion. 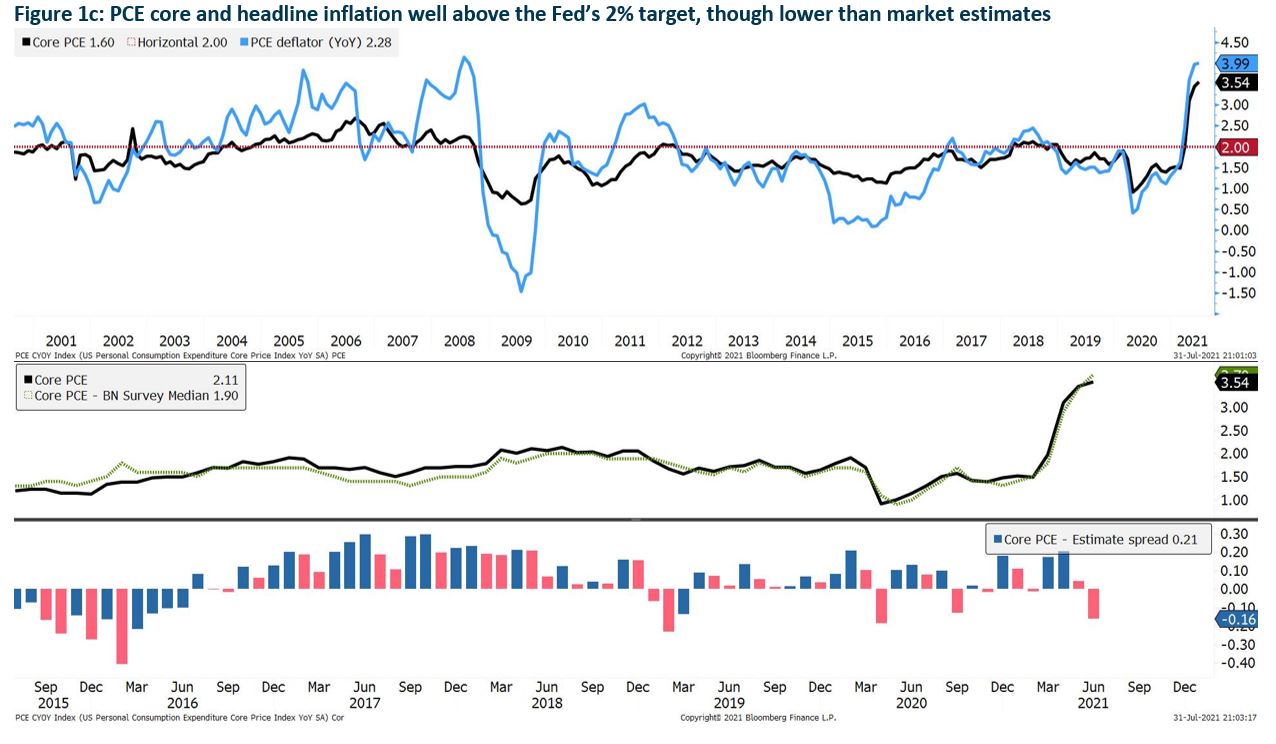 PCE core inflation of 3.54% is above the Fed’s 2% target. Inflation is high due to costlier energy and food and soaring housing rents. The good news is that core PCE 0.46%. Which should provide some relief to markets. Inflation will continue to dominate 3Q21 narratives, though we believe the pressure will ease as consumer sentiment dipped for the second consecutive quarter in 2Q21 (Fig 1d).

Bullish flags in weekly charts indicate further upside. Moreover, prices have been supported in the resistance zone of 32,381-34,046. The concern is that prices may stagnate, especially as a hanging man appeared two weeks ago with no candle appearing to break the resistance top at 35,000.

Following a rebound of wave (iv) of the intermediate phase from the 33,300 region on 21 June, the final phase of the sub-wave (v) is likely to complete further. As explained earlier, the ongoing bullish flag is key to potential upside. Zooming into even smaller sub-waves flags a slight correction on Wednesday to the 33,227.78 level, before a potential rebound to around 37,920 to complete sub-wave (v).