The Non-Farm payroll is said to perform better than last month but it misses the forecasted figures at 675K. Looking from the YoY basis, the Non-Farm Payroll has been on a decline as compared to June 2020. As such, growth of the labour force market is facing stagnation despite increase in hourly wages and stagnated labour force participation rate.

Going forward, the Non-Farm Payroll may enter a phase of stagnation based on the labour force participation rate and workers seeking expectations even though the U.S economy is entering into a phase of strong recovery.

Despite strong data in the month of March 2021 where NFP reported over a million-job created, the expectation is still way below the 10 million jobs created back before pre-Covid in March 2021. Furthermore, the recovery momentum slowed down after June 2020. Hence, the Federal Reserve may remain status quo on their interest rate and asset purchase programme 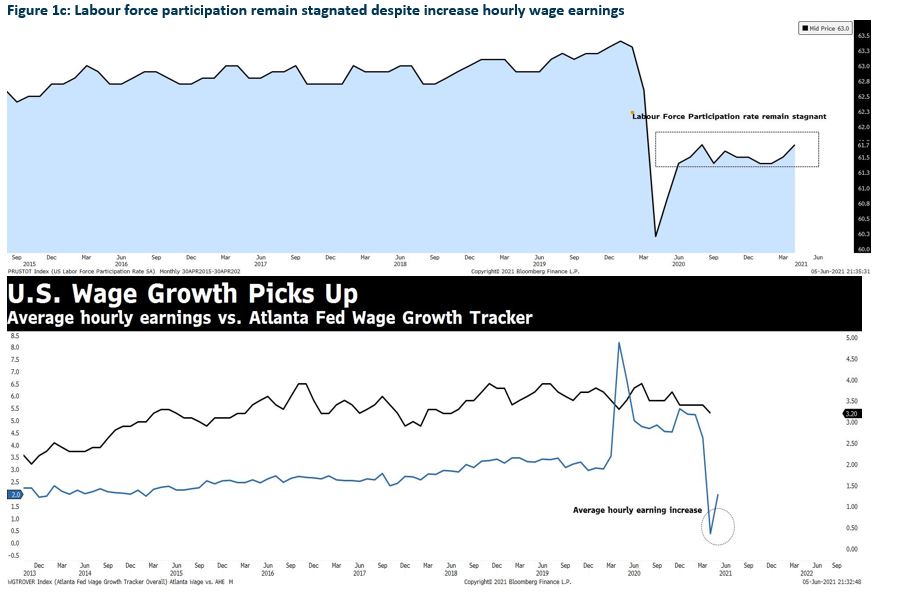 The Labour force participation increased slightly in April 2021 but it remains stagnated near the highs of June 2020 last year. With the increased hourly wage, it certainly speaks of the inflationary pressure and the shortage of workers within the U.S labour forces. This means that the stimulus package has push back workers from engaging in any form of work and workers have more bargaining power to choose what kind of jobs they are into.