However, the bullish move was rather short-lived as the overhead resistance at the 3341 area halted the ascent. The 3341 area was first established in July 2017 as resistance, and since breaking above it in October 2017, it has been acting as a solid floor in November 2017, February 2018 and April 2018 shown by the yellow highlighted boxes. Thus, the 3341 area is widely respected by the market. The current bearish rejection off the 3341 area is once again proving that it is an important area to watch.

On the weekly timeframe, the bulls failed to break above the 3341 area over three weeks suggesting the near-term sentiment is still very weak. The bears are still resiliently defending the 3341 resistance area.

Figure 1: STI Weekly Chart – all eyes on 3200 psychological round number to reverse the current bearish sentiment

Keep in mind the 3200 – 3189 support area and 200-week moving average will determine the validity of the long-term uptrend. Watch this support area closely for a possible rebound back into the uptrend. However, if bears succeed in breaking and closing below that support area on the weekly perspective, expect the STI to head into a more sustained downtrend with 3105 support area being the next target.

With the volatile market, we managed to identify six new trades in July. We have added the following six stocks into the “Phillip 20 Portfolio” in July.

*Note: The July new entries of UMS and China Sunsine have hit their respective stop loss in early August resulting in ‑11.49% and ‑14.69% loss to the portfolio. Average losses from these trades were -1.3%.

A total of seven counters were stopped out in July due to the overall negative sentiment caused by the cooling measures implemented in early July.

After a major reshuffling of the portfolio, there are currently 14 stocks within the “Phillip 20 Portfolio.” The following is the revised watch list that we are closely monitoring: 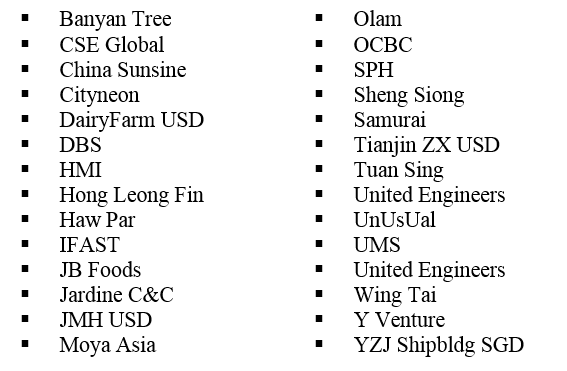