Performance of the Straits Times Index (STI) was rather sluggish for the month of August 2017 as the STI fell -1.60%. Resulting in a negative month for the “Phillip 20 Portfolio” for all closed trades in August with -1.26% loss.

Since August, the bullish momentum in the STI appears to be capped by the confluence of 78.6% Fibonacci retracement level and 3356 resistance area, turning the STI into a correction. It is currently testing an important inflection point at the 20 week moving average where a reversal is expected if the uptrend was to continue.

More importantly, the 3195 support area needs to hold up for the uptrend to remain strong. Keep in mind the weekly Relative Strength Index (RSI) had recently hit an extreme overbought region of 72 in July and a mean reversion is currently taking place suggesting a deeper correction. Heavy sell-off might surface once the STI breaks below the 3195 critical support area.

The general weakness in the market affected the “Phillip 20 Portfolio” drastically as a handful of counters triggered their stop loss and turned them into a downtrend. The biggest loser of all was Sunpower with -27.88% loss since 30 March 2017.

Fortunately, the accumulated loss in August was cushioned by the big gains in Hi-P as we took profit at 1.410 with a 48.2% gain. We have also decided to take profit on both UMS and Metro with 4.19% gain and 6.79% gain respectively due to the bearish price action.

Even with the sluggish market movement, we were able to identify a few buying opportunities with Golden Energy, Ellipsiz, Haw Par, Pan United, Moya Asia and Miyoshi, being added to the “Phillip 20 Portfolio.”

After a major reshuffling of the portfolio, there are currently 13 stocks within the “Phillip 20 Portfolio.” The following is the revised watch list that we are closely monitoring: 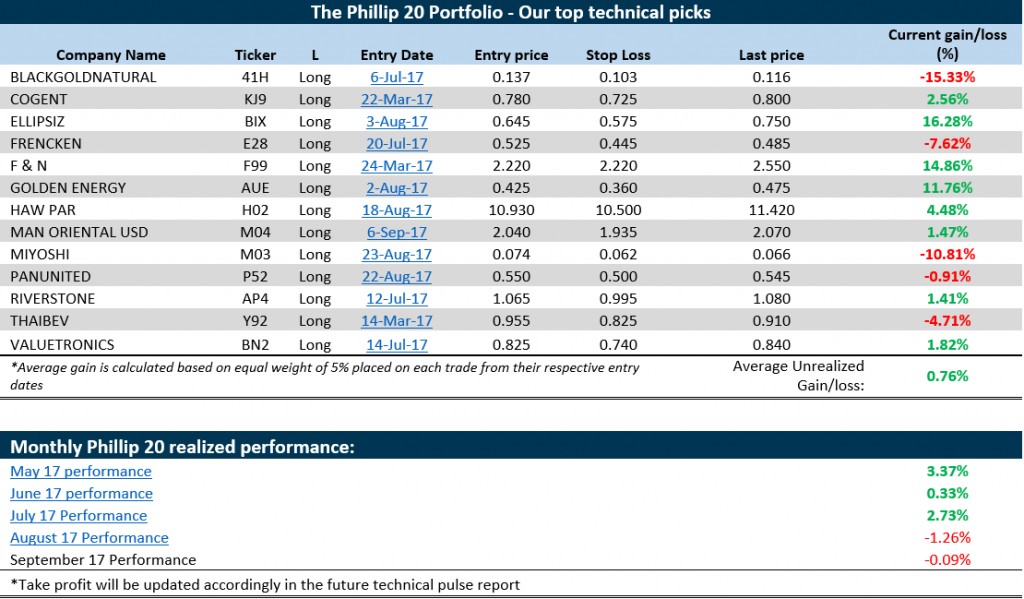