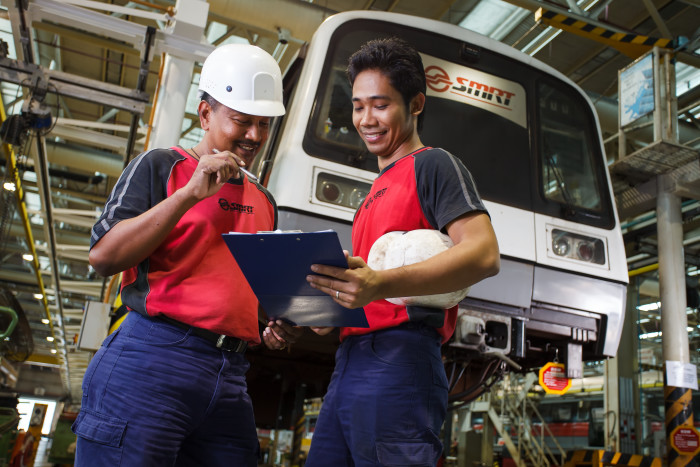 After more than four years of negotiations, the transition for SMRT to the New Rail Financing Framework (NRFF) was announced by the Land Transport Authority (LTA) on 15 July. Trading of SMRT shares was halted just before noon, pending the release of the announcement. The transfer of assets will put the onus on LTA to invest in new assets to meet capacity and demand, as well as replacing aged assets. Meanwhile, SMRT will take on its new role as an operator, being responsible for maintenance of the rail network and consequently delivering a reliable rail service.

We raise our WACC to 7% from 6.8%, in view of the change in capital structure (retiring of debt) and the heightened business risk going forward. WACC should converge towards cost of equity as debt is being gradually retired.

How do we differ from consensus?

We find ourselves at the lower end of consensus expectations in terms of future earnings and consequently valuation as well. We highlight that the bullish camp on The Street has previously assumed NRFF EBIT-margin of 5% to 15% being applied to the Rail business, and possibly a nominal Licence Charge being applied. We now know with certainty that the NRFF will adopt a 5% composite (Fare & Non-Fare) EBIT-margin on SMRT Trains with a Licence Charge and Profit Cap and Collar. With these material differences, we opine that the bullish camp on The Street has grossly overstated future earnings.

The first payment will be on the date of transition (1 October 2016), with subsequent payments on the next three anniversaries of the transition. Payment in the four tranches will be S$797 million, S$72.5 million, S$72.5 million and finally S$48 million. The sale proceeds of the first tranche will be used to pay down existing debt and invest in strengthening rail competencies; SMRT does not intend to pay a special dividend to Shareholders.

The intent is to improve maintenance performance and reliability of the rail system. In order to comply with the new MPS, SMRT intends to increase its maintenance staff by 20% over the next three years.

Upon commencement of the NRFF on 1 October 2016, SMRT Trains, will pay a Licence Charge to operate all three lines (NSEWL, CCL and BPLRT) under a single new licence. The new shorter operating licence of 15 years is to allow LTA to re-tender the operation of rail lines more often, thus making the industry more contestable. The Licence Charge will be paid into the Railway Sinking Fund, which will help pay for the building-up, replacement and upgrading of operating assets.

The Licence Charge that SMRT will have to pay, has been structured by LTA to allow SMRT Trains to earn a composite (Fare and Non-Fare) EBIT-margin of c.5%. The Licence Charge structure will provide a revenue shortfall sharing, and a risk- and profit-sharing mechanism.

How does the Licence Charge work in conjunction with the risk- and profit-sharing structure? What is the composite EBIT-margin in the NRFF, and why does it matter?

Among the various business segments reported by SMRT, the NRFF affects four of them: Train, LRT (collectively referred to as Rail or Fare), Rental and Advertising (collectively referred to as Non-Fare). SMRT derives Non-Fare revenue and EBIT through its Rail network, by leasing out commercial space within the MRT stations, and selling advertising space within the MRT stations and on the trains.

The Rental segment has historically delivered an EBIT-margin in the mid-70s, but this has come down in recent years due to the introduction of Kallang Wave Mall into the Group.  Advertising has consistently delivered an average EBIT-margin of c.60%, but with a downward trend.

A significant amount of profits is derived from Rental and Advertising within the Rail network. Under the NRFF, these profits will be included into the composite EBIT, and consequently and composite EBIT-margin.

What remains the same?

How much will the Licence Charge be?

The quantum for the baseline Licence Charge was not disclosed. We examine SMRT’s FY16 financial results to get a sense of where the final Licence Charge could be priced at.

Under an asset-light model, there will not be any depreciation expense. Consequently, we believe that the final Licence Charge has been re-calibrated close to the existing Rail-related depreciation expense of S$100 million~S$110 million, in order to arrive at the target 5% composite EBIT-margin. SMRT estimates its capital expenditure (CapEx) obligation to grow over the next five years to c.S$2.8 billion in aggregate. With fares being set by the Public Transport Council (PTC) under a fare adjustment formula, SMRT is not able to control its Fare revenue. The cost of higher ridership demand, higher performance and reliability standards and maintenance of an aging rail network had outpaced revenue growth; thus making the Current Rail Financing Framework (CRFF) unsustainable. With the implementation of the NRFF, SMRT will now be able to concentrate on its role as an operator and provide a level of service that is expected of it.

The shorter licence is intended to increase contestability in the industry, so that LTA can replace an under-performing operator sooner rather than later. We believe that there are no longer any sacred cows when it comes to public transport, and LTA would have the gumption to replace any incumbent operator. We draw a parallel to the recent transition of the Bulim Bus Package (the first package under the new Government Contracting Model for public bus services in Singapore), which has been smooth and successful. Thus illustrating that no incumbent operator is indispensable.

Without any operating assets, SMRT loses any bargaining power previously accorded with ownership. Making it even more so easier to be replaced by another operator. Recall that in a speech last year on 4 December (Paragraph 18), the Transport Minister had set a goal for LTA to build up its engineering capabilities and “establish a team that is able to take on operations and maintenance, should we decide to move in that direction”.

In lieu of SMRT’s future Rail CapEx obligations, LTA will impose an enhanced MPS under the NRFF. This is in line with SMRT’s role as an operator, and SMRT’s Management has guided that Rail MRE will trend towards 50% of Rail revenue.

With all three lines tied to the same operating licence, SMRT could be left with only its Bus and Taxi business, if it were to lose the right to operate the Rail network at the end of 15 years. However, this should not be a concern for shareholders today, since that event is beyond the typical investment horizon. However, it could pose an overhang on the share price as that date approaches, as uncertainty surrounds the renewal of the licence.

The Profit Cap and Collar structure affords little upside for SMRT, as LTA will take up to 95% of the profits that are in excess of the 5% composite EBIT-margin. At the same time, LTA’s downside is limited to the Licence Charge, as it will not share in any further risk if the Licence Charge payable is zero.

We view that the NRFF does not have any immediate impact on profitability and we have largely retained our earnings forecast. Without a depreciation expense but same level of profitability, the cash flow from operating activities will now be lower than before, since there is no reversal in the non-cash charge in the cash flow statement. This is offset by the reduction in CapEx requirements. Going forward, we see a more sustainable cash flow profile. Excess cash will be used to retire debt, thus lowering interest expense. SMRT has S$550 million of fixed rate notes maturing in October 2017. We have modelled their repayment in FY18. Overall, SMRT should be in better financial health going forward, but with the additional business risk outlined above.

Both the Fare and Non-Fare revenues and EBIT are used in determining the composite EBIT-margin for the Profit Cap and Collar. We have held the view that the Trains business cannot be view independently from the associated Advertising and Rental businesses. In our Land Transport Sector report, dated 8 December 2015, we had opined that “the Rail businesses should be viewed in totality with the Advertising and Rental businesses associated with it.”

We had long expressed our scepticism over any cash proceeds from the transfer of operating assets to LTA being disbursed to shareholders. We first stated more than two years ago on Page 5 of our re-initiation report on SMRT, dated 29 April 2014, that “we think it is unlikely that the cash would be returned directly to shareholders”.