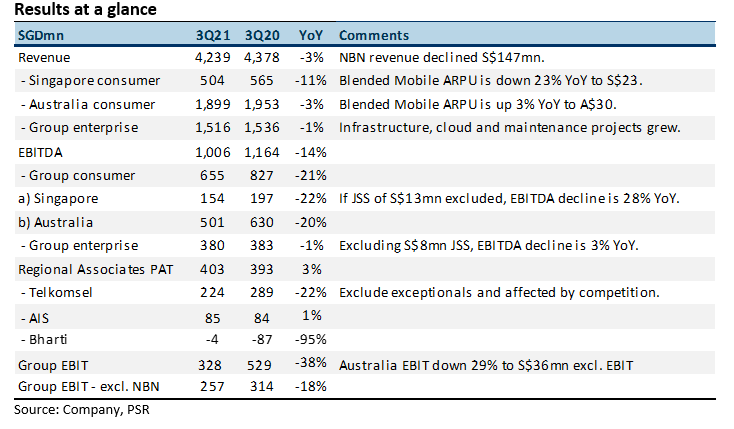 + Enterprise earnings resilient. EBITDA at group enterprise was flat YoY. This was commendable, given macro weakness. Demand was driven by system infrastructure services, cloud and maintenance projects led by NCS and Australia Enterprise. NCS bookings in 3Q21 were S$809mn from public service, financial and commercial. 1H21 bookings for the whole enterprise division had only totalled S$755mn.

+ Australia consumer stable. Revenue from Australia consumers was up 5.4% YoY to S$4.16bn, ex-NBN. Singtel’s strength in Australia came from mobile revenue, which was flat YoY at A$1.5bn. Despite a 5% YoY fall in mobile subscribers, blended ARPU managed to creep up 3% to A$30. A 41% YoY surge in data usage to 17GB per month likely helped.

+ Turnaround at Bharti continued. Net loss at Bharti shrank 95% YoY to S$4mn. Higher mobile ARPUs and strong 4G additions were behind this.

Singtel remains in the grip of roaming losses, high costs in Australia and competition in Indonesian mobile. That said, it had some bright spots in 3Q21, such as its enterprise resilience, mobile revenue stability in Australia and Bharti’s recovery.

We keep our target price and FY21e earnings largely unchanged. We continue to value Singtel’s core Singapore and Australia businesses at 6x EV/EBITDA and mark its associates to market with a 20% discount to account for their share-price variability.