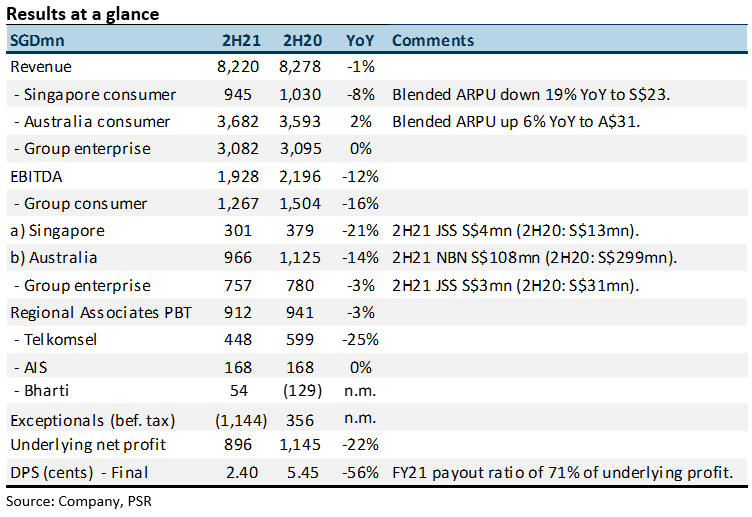 + Stable Optus mobile revenue. Mobile revenue was unchanged at A$2.74bn. Blended ARPU managed to rise 6% YoY to A$31. This offset a 4.5% YoY decline in subscribers to 9.97mn. Prepaid ARPU suffered the most with a 12% decline due to fewer inbound travellers and foreign students.

+ Bharti remained the bright spot. Operating profits for Bharti in India and Africa surged 74% YoY in 2H21 to S$541mn. Revenue expanded from higher ARPUs and subscribers. However, underlying profit contributions were negated by high finance costs of S$420mn. Singtel’s 31.7% stake in Bharti Airtel is worth S$16.6bn, marked to market.

– Hat trick* cost of S$1.2bn. On 14 May, Singtel announced impairment charges for intangible assets and goodwill for Amobee (S$589mn) and Trustwave (S$336mn). Adding in a S$195mn impairment for Amobee last year and liquidation of Hooq (S$68mn), its acquisition-cum-digital adventure cost at least S$1.18bn over two years, excluding operating losses. Management mentioned that without partners, it is unable to scale up faster.