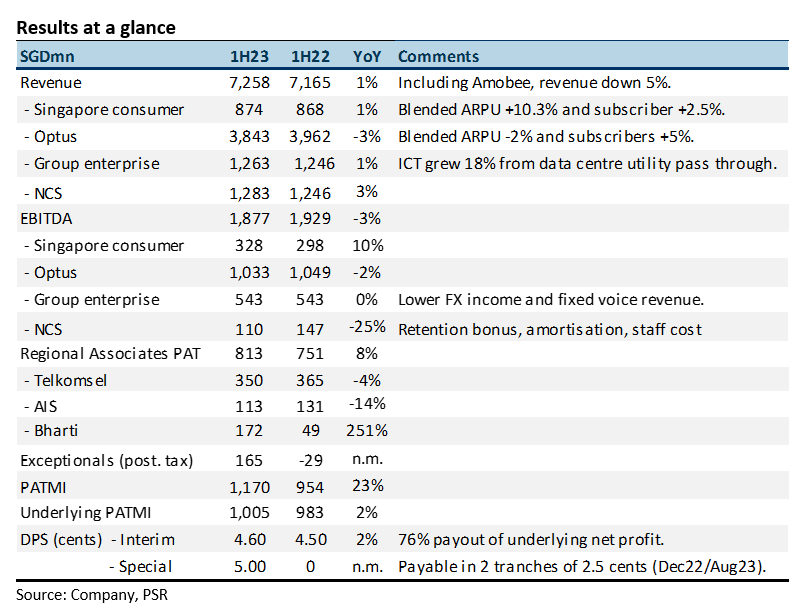 + Strength in Singapore consumer. Singapore consumer grew EBITDA 10% YoY to S328mn. Mobile enjoyed EBITDA expansion from a 12.6% YoY rise in ARPU as roaming revenue returned with borders re-opening. Roaming is around 60% of pre-pandemic levels. Penetration of roaming has risen as compared to using SIM cards of destination countries. Revenue was impacted by a 21% decline in pay TV to S$74mn due to the cessation of EPL.

– Still a work in progress for NCS. EBITDA for NCS declined 26% YoY to S$110mn. Part of the weakness was from post-acquisition charges in Australia such as staff retention and earnouts and overall higher staffing cost.

– Losses in GXS Digital bank. The digital bank associate registered a S$27mn loss in 1H23. Expectations are for break even in 2025 rather than 2027. From a banker to everyone strategy, GXS will pivot to selected segment. Loans will be targeted to mobile devices and niche small medium enterprises. The advantage of GXS is the lower customer acquisition cost by embedding GXS into Grab and Singtel apps plus tapping on both customer bases.

– Provisions in Optus. There were two provisions made on Optus – (i) goodwill impairment of S$1bn from higher WACC, lower Australian dollar and weaker economic outlook assumptions; (ii) A$140mn provision for the cyber attack based on independent review, credit monitoring services for impacted customers and replacement of customer documents. It does not include potential class action (no notification so far) and penalties from pending investigations.