Singapore’s property has always been a popular investment vehicle for locals and foreigners alike. The Asian “insatiable hunger for bricks”, metropolitan culture, stable political and economic system of Singapore has drawn in investors over the years. Since suffering a c.25% drop in the property price index during the Global Financial Crisis (GFC), property prices and sales volume recovered remarkably in the 2 years from 2009 before a slew of cooling measures were implemented by the Government. Over a five-year horizon from 1Q11 (around the start of a slew of cooling measures), current residential property price index has returned to near the level it was at since 1Q11 (See Figure 20).

We highlight that the recent uptick in sales volume over the last 2 quarters was due to two factors: various marketing schemes by developers, and the continued sales momentum in selected Outside Central Region (OCR) launches that was supported by low interest rates. However, sales volumes remain way below the heyday seen before the GFC or during 2010-2011 after the recovery. We expect the government’s continued clampdown on foreigner influx, increasing indebtedness in household balance sheets and more favourable foreign property markets to continue to impact interest and affordability in local property.

The implementation of the various property cooling measures has drastically dried up sales volume. We do not expect the lifting of the cooling measures until at least 2H17, in light of the gradual and manageable fall in home prices so far, especially with the relative strength in prices of OCR properties (See Figure 18). In light of this, we do not see major catalysts in sight for a big uptick in sales volume.

During a routine parliament sitting in March 2010, then-Minister for National Development, Mr. Mah Bow Tan addressed some public grouses on the state of Singapore’s public housing market. Amongst the grouses were the high number of unsuccessful applications for (Build-To-Order) BTO flats for first-time married couples, and the escalating prices of resale HDB flats led by increasing Cash over Valuations (COVs) paid.

Unsurprisingly, the rise in the number of grouses on the ground coincided with the period which saw the lowest number of new HDB flats built over a five-year period since HDB’s forming in 1960 (see Figure 1). From 2006-2010, we saw an average annual supply of 5,987 flats. 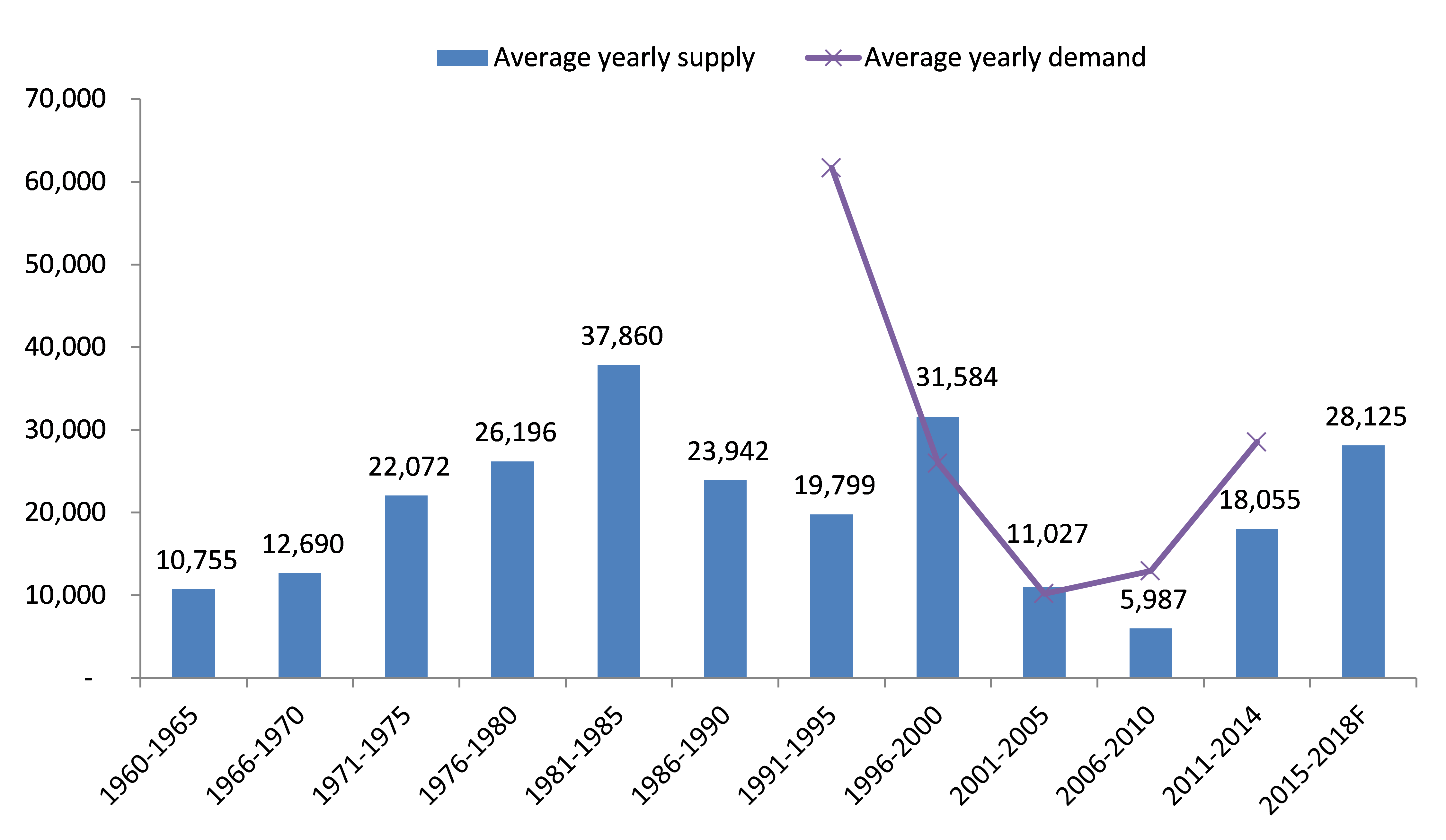 Forecasted supply until 2018 expected to be sufficient to meet demand

After lagging total demand (estimated by total bookings for public housing) over the past 10 years, average annual supply of HDB flats is expected to be ramped up to c.28,125 from 2015 to 2018. Total bookings, could potentially misstate real demand, due to reasons such as supply-led bookings, or double counting of re-bookings in a particular year after a previous failed allocation. We look at the total number of marriages in a single year for a better gauge of how much demand could potentially be, from what we believe would be the biggest group of demand generators for HDB flats. According to the HDB, an estimated 82% of Singapore’s residents live in HDB flats. Extending this ratio to the number of marriages per year (28,322 in 2015), we expect demand for new public housing per year catering to this group of resident population to be closer to the 20,000 range.

Figure 2: Total number of marriages in a year, Singapore 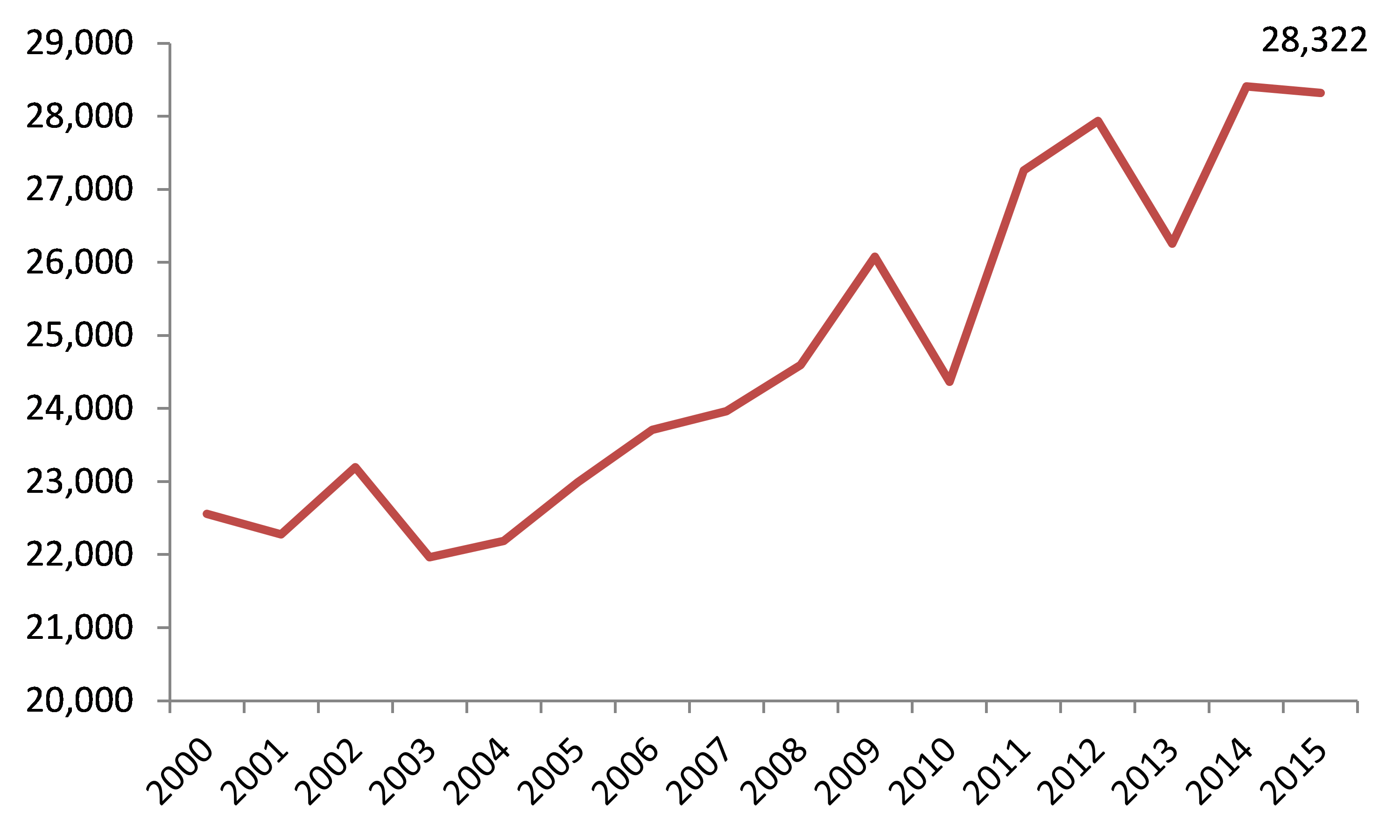 The Ministry for National Development (MND) has projected for some 112,000 new HDB flats to enter the market from 2015-2018. This translates to an average annual supply of 28,000 units of public housing until 2018, which represents a period that will see the highest number of flats being built annually since the late 1990s.

Developers with upcoming/existing Executive Condominiums (EC) launches could see slower take up rates as home buyers are presented with a greater number of options, especially from launches in mature HDB estates.

After being phased out from 2008 in favour of the Design, Build and Sell Scheme (DBSS), the EC scheme was re-introduced in 2010, to be launched in parallel with DBSS flats. DBSS land sales was eventually suspended in 2011. Since its re-introduction in 2010, the supply of ECs has been gradually ramped up, in conjunction with the increase in supply of BTO (cancelled because it is on page 2 already) flats. With an occupancy rate of 86.2% as at 2Q16, 2,943 units stood unoccupied and unsold, representing a high since the EC scheme was reintroduced in 2010. This is also slightly more than the average annual number of units sold at 2690, since 2010.

Limited land sales for ECs to limit supply from 2017

Further to the already launched projects, as of 2Q16, three remaining land parcels slated for EC purposes are expected to be launched in 2017/1H18, which by our estimates, would increase supply by an additional c.1,500 units. Total market supply including launched but unsold units currently stand at c.4,000 units. This is about 1.5 times the average annual number of units sold since 2010. With only these 3 remaining plots of land (as mentioned below) yet to be launched until 1H18, a slowdown in supply till then should help developers to gradually clear their existing inventory of EC units without needing to incur any Additional Buyer’s Stamp Duty (ABSD) charges (despite the expected ramp up in HDB flat supply over the next few years). More importantly, we do not foresee the need for them to significantly reduce prices in order to clear inventory before any ABSD deadlines