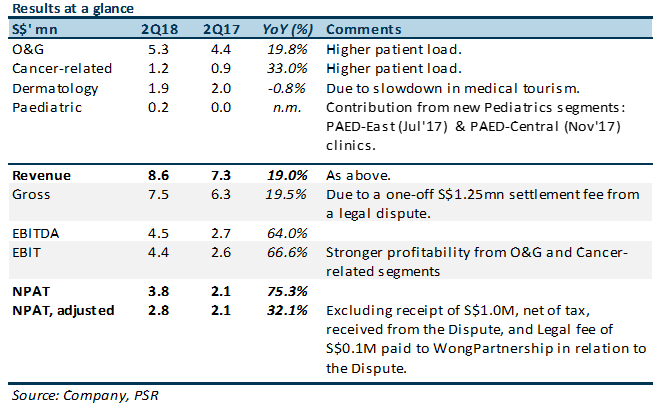 + Cancer-related segment profits doubled. EBIT from O&G and cancer-related segments increased by 28.8% and 94.2% YoY, respectively, more than offset the challenging dermatology segment and ‘start-up’ losses incurred by the newly established paediatrics segment. 2Q18 EBIT margin for Cancer-related segment expanded from 19.3% to 28.2%, mainly due to Lim Siew Kuan who broke even in FY17 and her increase in patient load contributed positively to the earnings.

The new Paediatrics segment incurred S$0.2mn ‘start-up’ losses to date. The 2 new paediatrician joined in July and November 2017. We expect both Paediatricians to breakeven by end-FY18.

We are cautiously optimistic about FY18e. With a gradual recovery in birth rates in Singapore, and the Group’s ability to consistently gain market share in live births in Singapore, we expect the O&G segment to continue showing strong growth. We also expect the cancer-related segment to support Group’s FY18e profitability amidst persistent headwinds – (a) sluggish birth rate and (b) structural slowdown in medical tourism.

In addition, the Group launched the new HIFU treatment in July 2018 with 10 successful procedures performed so far. The Group is optimistic in the pick-up rate of this treatment in the unserved niche market for HIFU (High-Intensity Focused Ultrasound) treatment.

Lastly, the Group’s collaboration with SATA CommHealth is set up and it is only a matter of time before receiving referrals.

Upgrade to BUY (previously Accumulate) and unchanged TP of S$0.42, based on unchanged FY18e EPS of 1.82 cents and forward PER of 23.2x. SOG has a stable market position and its profitability from the O&G and Cancer-related segment has been improving as more doctors breakeven and gain more patient load. The Group is actively seeking suitable doctors to join its team to further grow its four business pillars. Management targets to add 2-3 new specialists by FY18e especially to the paediatrics segment. New doctors typically take 1 – 2.5 years to break even. The Group has a robust balance sheet with zero debt and a cash position of S$18.23mn (c.11% of its market cap).

Refer to the announcement dated 6 Mar-18, SOG has received the settlement amount of S$1.25mn for a settlement related to a dispute with its former Lead Independent Director, Mr. Christopher Chong Meng Tak.