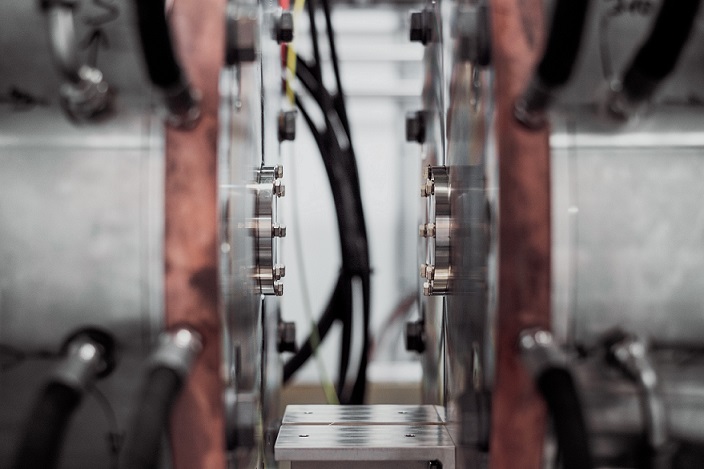 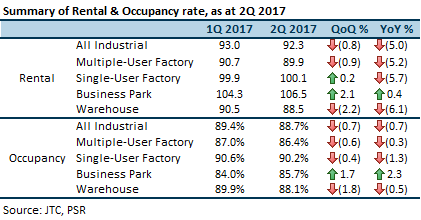 Our view for negative reversions to persist in the near-term remains unchanged since our last quarterly update (8 May 2017). During this season’s results briefings, we repeatedly heard Managers caution for negative reversions in 2H 2017. Ascendas REIT (A-REIT) had +1.1% reversions, but was due to one-off effect from first-cycle renewals at Aperia. Excluding the one-off effect, rental reversion for A-REIT’s Singapore portfolio would have been negative. Other casualties with negative reversions were Mapletree Industrial Trust (MINT, -2.0%), Soilbuild Business Space REIT (SBREIT, -9.8%) and an outlier renewal at Cache Logistics Trust (Cache, -20%). Our previous view was for rents to bottom in 2017. We now believe rents to bottom only by the end of 2018.

Managers generally gave feedback that they are seeing more enquires YoY and QoQ. However, it is still a tenant’s market – tenant retention and maintaining occupancy remains the priority for Managers. This will put pressure on rents.

Sabana Sharia’ah Compliant REIT’s (SSREIT’s) portfolio was valued downwards by S$27.9 mn to S$964 mn in 2Q 2017. This resulted in higher QoQ aggregate leverage from 36.1% to 37.0%. REITs with significant exposure to master lease expiries are AIMS AMP Capital Industrial REIT (AA-REIT, 7.5% of rental income) and SSREIT (22.6% of net leasable area). All things held equal, lower YoY rents in 2017 would result in lower end of year valuations. This would have the effect of raising aggregate leverage as the existing debt is across a smaller asset base.

Following the default by Technics Offshore Engineering at SBREIT’s property (72 Loyang Way) in 2016, Tellus Marine defaulted at ESR-REIT’s property (21B Senoko Way) during the quarter and consolidated its operations at its existing SBREIT property (39 Senoko Way), where a new annex block was completed in November 2016.

We maintain our “Equal Weight” view on the Industrial sub-sector.

The tailwinds for the sector are the tapering of supply of Industrial space in 2018 and the uptick in industrial activity in 1H 2017 to expansionary mode. However, occupancy is lower QoQ and YoY in 2Q 2017. The uncertainty is the exact timing of the bottom for rents, but we believe it to be by end-2018. Meanwhile, we expect to negative rental reversions to continue in 2H 2017.

With the recent run up in prices of the Industrial REITs, our view is that positive expectations have been factored in, and there is now a greater probability for disappointment rather than a positive surprise. We would like to see occupancy to improve, in order to upgrade our sector view for Industrial REITs.

Singapore is evolving towards higher value-added manufacturing and there is a push with the Smart Nation initiative. We like REITs that can capture this opportunity with Business & Science Park properties and Hi-Tech/Hi-Specification buildings. Our favourites are:

Our recent report (8 August 2017) outlines our bottom-up view of an acquisition of Sabana REIT’s assets, either by e-Shang Redwood (ESR) or ESR-REIT.

We view SSREIT as a high-yield play that offers a ~7.3% yield (1H17 DPU of 1.69 cents annualised) with a free call option if it gets acquired. There is minimal risk of unitholder dilution this year, as the Manager did not secure a general mandate at the FY16 Annual General Meeting. The key risk to DPU in 2H 2017 is occupancy level, master lease conversions and negative rental reversions. The key risk to our event-driven thesis is that the sale of assets does not materialise.

ESR-REIT announced the proposed divestment of 55 Ubi Avenue 3 in January 2017. ESR-REIT subsequently announced the proposed divestment of two other non-core properties (23 Woodlands Terrace and 87 Defu Lane 10) during 2Q 2017. No further announcement has been made on any proposed property acquisition. At the same time, the Distribution Reinvestment Plan (DRP) was switched on this quarter, after a hiatus of five quarters. The last time the DRP was applied was for the 4Q 2015 distribution.