+ Securities trading and clearing revenue up 9% YoY to S$51.2mn due to an 18% YoY increase in SDAV. 1Q18 Traded value in equities which include ordinary shares, REITs and business trusts increased 14% YoY to S$67.5bn. The traded value in other securities products which include warrants, ETFs, Daily Leveraged Certs (DLC), debt securities and American depository receipts (ADR) increased 82% to S$5.7bn.

+ Market Data and Connectivity revenue up 10% YoY to S$24.2mn, accounting for 12% of total revenue. The increase is due to higher reported data usage and also from continued growth of SGX’s colocation services business.

– Post-Trade Services down 9% YoY to S$26.4mn, accounting for 12% of total revenue. Contract processing revenue declined 58% from S$3mn a year ago to c.S$1mn because brokers are migrating to their own systems and no longer need SGX’s contract processing services. It is estimated that this revenue stream will cease by early 2018. In the other segment of Post Trade Services, the securities settlement revenue proves to be stable and makes up c.88% of the Post Trade Services revenue. However, we think that this segment appears to be stagnating and would not contribute meaningfully to SGX’s growth in FY18.

We have increased our FY18e SDAV estimate S$1.23bn (previous estimate S$1.16bn) because we expect continued strong growth in ETFs, DLCs and warrants traded volume; and we also expect stronger equities traded volume especially in property and finance counters. We also increase our FY18e total derivatives volume estimate to 199mn contracts (previous estimate 187mn contracts). We expect stronger traction for existing derivatives products as well as higher traded volumes from new product launches in FY18. In the derivatives portfolio, we are most upbeat on the China A50 Equity Index Futures and the USD/CNG Futures following the relaxation of rules in China pertaining to Equity Index Futures trading earlier this year. Both products make up 39% of SGX’s derivatives traded volume. FY18e operating expense guidance remains unchanged at the range of S$425mn to S$435mn.

Maintain Accumulate with lower TP of S$8.31 (previous TP S$8.39) based on 23.9x historical 5-year average PE ratio. Our lower target price is due to weak revenue growth outlook in Post Trade Services in FY18e and we lowered our revenue expectation for securities clearing fee due to the higher contribution from low margin products. 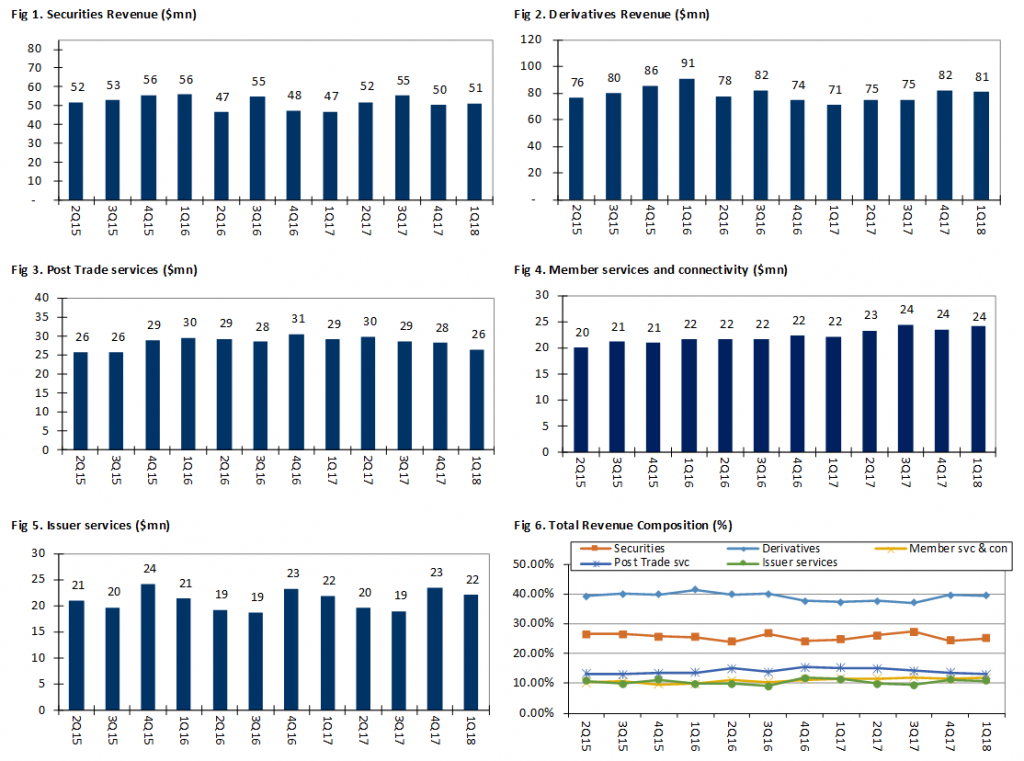