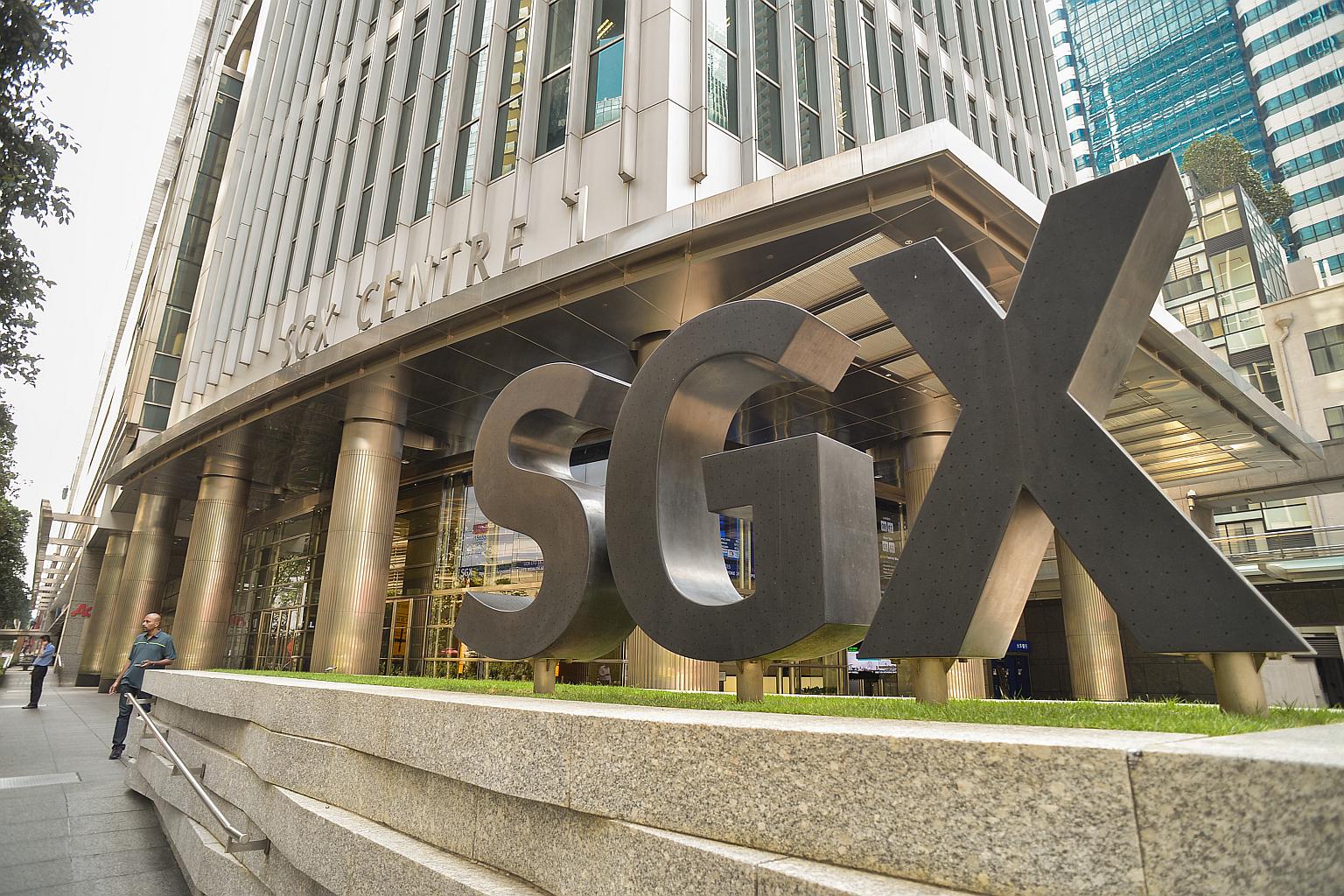 Financial highlights and how we view it

Equities and Fixed income business dragged down by low SDAV. Securities Clearing declined 16% y-o-y due to Securities Daily Average Volume (SDAV) declining 19% y-o-y to S$0.99bn. Clearing fees remained unchanged y-o-y at 2.89bps. Issuer Services segment was supported by 8 new listings and 139 new bond issues. The decline SDAV was attributed to the lower levels of market activities due to economic and political uncertainties and exacerbated by the 14th July 2016 securities market shutdown. A near term catalyst will be the RMB initiatives announced by MAS in November 2015. SGX may benefit from companies from Chongqing, Suzhou and Tianjin to issue RMB bonds in Singapore and fully repatriate the proceeds raised.

Cost impact. In our previous report, we highlighted the need for SGX to focus strongly on costs management to support margins during weak business cycles. But we do not see convincing evidence of structural measures to cut costs. Expenses in 1QFY09/17 were seasonally lower than other quarters because of lower depreciation costs resulting from the cycle of technology capital expenditures and variable bonus decreased 29% y-o-y from S$12mn to S$8.5mn in line with declining revenue. Management’s FY17e guidance for operating expense of S$420mn to S$430mn is similar to our previous estimates of S$429mn which implies no further measures to improve to cost cutting. We estimate FY17e net profit margin to be at c.41%, lower than FY16’s 42.7%.

We have lowered our FY17e revenue from S$858mn to S$817mn because of expectations of low trading volumes arising from a weak market sentiment. We assume that the final variable dividend will revert to S$0.12 by FY18e. We have also updated the PER in the valuation method to 24.3x, previously 24.5x. Maintain “Accumulate” with lower TP of S$7.69 because inasmuch as we do not see any margin boost from costs savings, the quality its dividend should support the share price. 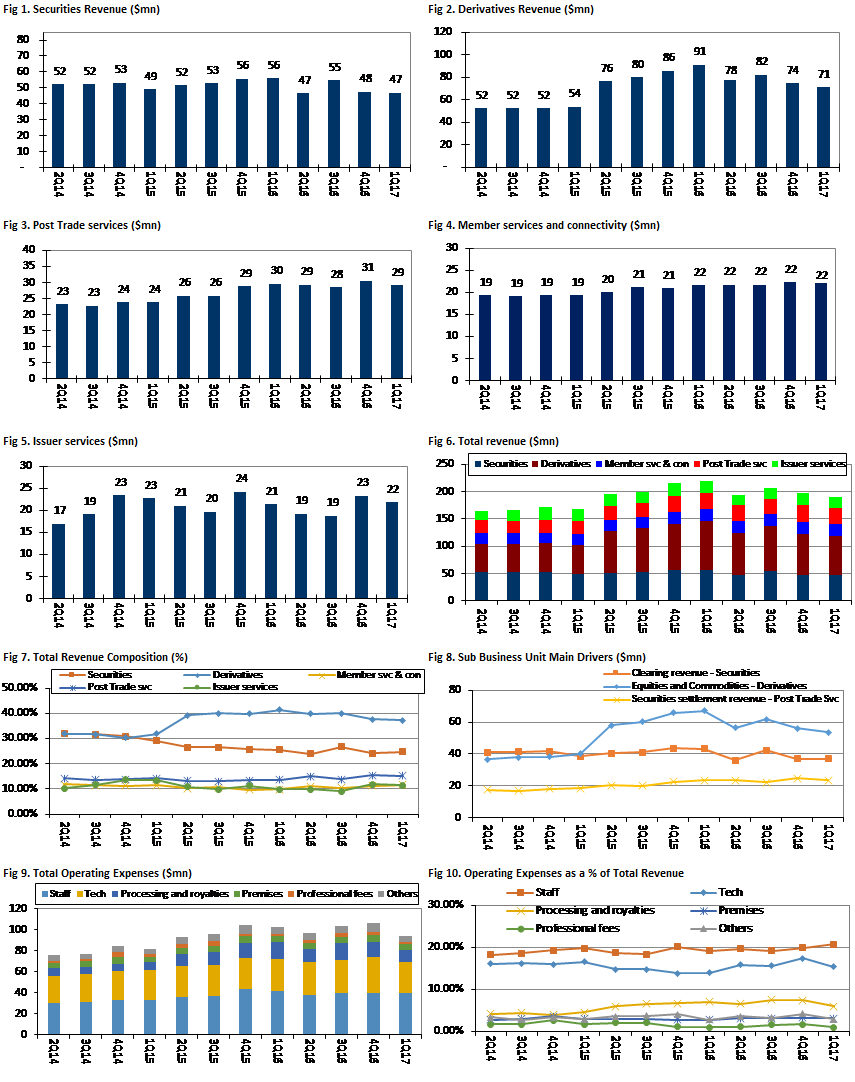 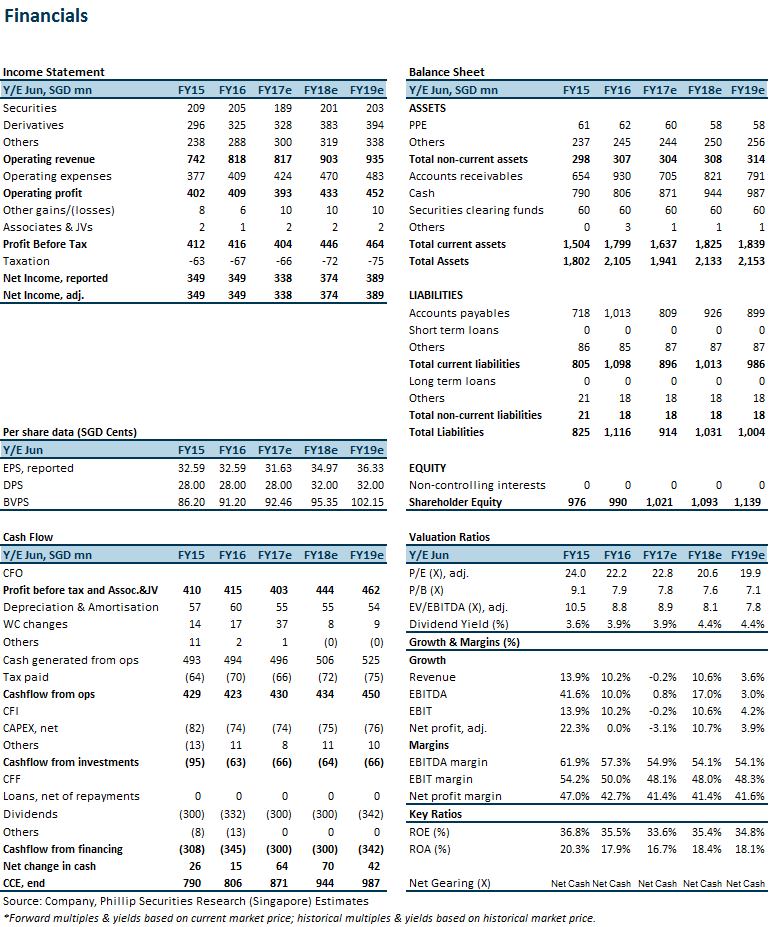