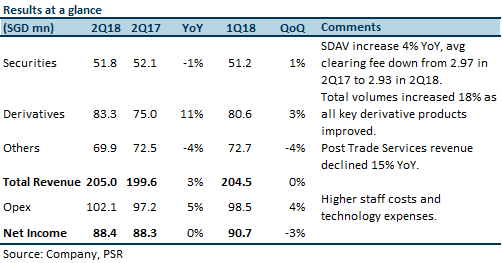 + Derivatives revenue rose 11% YoY to S$83.3mn, contributing 41% of total revenue. Despite a weak trading environment globally, SGX managed to grow its derivatives revenue. The improved performance is attributed to stronger flows into Asian emerging markets in which SGX is the gateway.

+ Market Data and Connectivity revenue up 4% YoY to S$24.2mn, accounting for 12% of total revenue. The increase is due to higher reported data usage and from continued growth of SGX’s colocation services business.

– Post-Trade Services down 15% YoY to S$25.4mn, accounting for 12% of total revenue. Contract processing revenue led the decline in the segment with a 63% YoY decrease from S$3mn to S$1.1mn as brokers are migrating to their own back office systems. Brokers are expected to complete the migration by 3Q18. In another segment of Post Trade Services, the Securities settlement revenue declined 9% YoY because of a change in the mix of securities settlement instructions.

SGX will be launching Indian Single Stock Futures (SSFs) in February 2018 in addition to its existing Nifty 50 Index Futures. We believe SGX is expanding its product mix as foreign use of Indian domestic derivative products through Offshore Derivative Instruments (ODIs) also known as participatory notes (P-Notes) will be phased out. Therefore, foreign market participants are expected to clamour for Indian financial derivatives available in offshore platforms such as SGX and Dubai Gold and Commodity Exchange. SGX will be implementing the Dual Class Shares (DCS) and the rules for DCS are expected to be out by June 2018. Shortly thereafter, the first company with DCS is expected to be listed. SGX has initiated a Euro Medium Term Note programme to boost its war chest further by S$1bn to S$2bn. We believe that SGX will be looking for acquisitions to reinforce its derivatives and fixed income businesses and even venture into the private market space. FY18e operating expense guidance has improved to between S$410mn to S$420mn from previous guidance of S$425mn to S$435mn due to lower fixed costs. 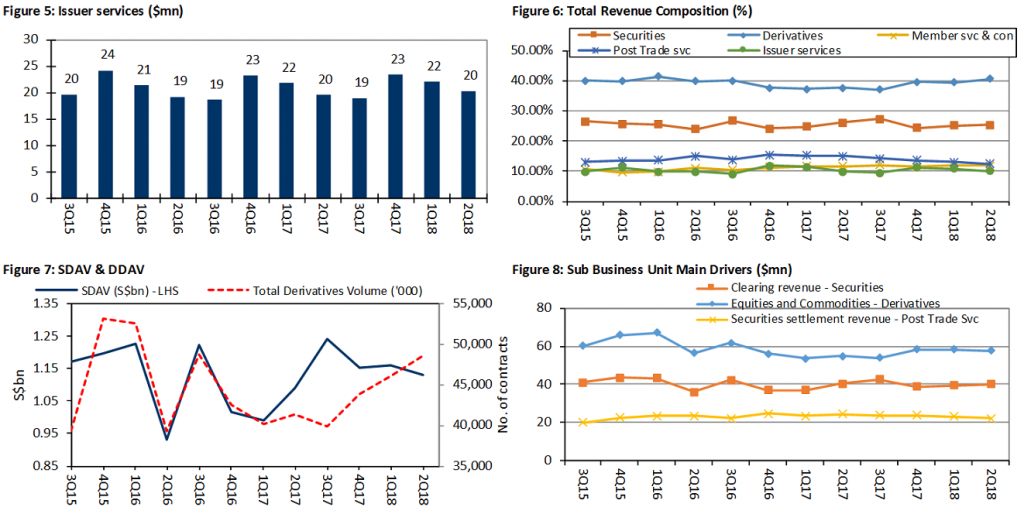