+ Derivatives business continues on its growth trajectory. Derivatives revenue rose 12% YoY stemming from the 20% surge in volume, reaching a record high of 198mn contracts. However, the average fee per contract was down 10% YoY to S$1.06 due to change in product mix towards lower yield products. Improvement in volumes came largely from China A50, Nikkei 225 and FX futures products.

+ Securities to benefit from volatility. SDAV achieved a 5-year high of S$1.26bn, a 12% increase YoY. SDAV was boosted by new DLCs and efforts to grow retail market participation. Expectations of more rate hikes in the US Federal Funds Rate and trade war conflicts could fuel more reallocations of investment holdings within investors’ portfolios; which could result in higher volumes generated in the upcoming quarters.

+ Market Data and Connectivity revenue up 5% YoY to S$98.3mn, accounting for 12% of total revenue. The increase is due to continued growth in data licences for application system usages and SGX’s colocation services business.

– Arbitration with IISL hangs in limbo. The cross-border trading link collaboration in GIFT City seems to be back on the table; as a result, arbitration proceedings have been deferred but SGX’s extension of SGX Nifty contract licence beyond August 2018 remains valid. Uncertainties caused by the developments on India derivatives since February 2018, was reflected in the weaker derivatives average daily volume in 4QFY18 and remains uncertain until the arbitration has a conclusion. DDAV in 4QFY18 decreased 10.9% QoQ but increased by 13.6% YoY. However, the continuation of licensing and postponement of arbitration should provide some stability for the India derivatives in the near term. Nifty 50 Index Futures accounted for 11% of the total volume of derivatives traded in FY2018.

– Post Trade Services down 14.2% YoY to S$99.3mn, accounting for 12% of total revenue. Contract processing revenue declined 71% from S$11.6mn in FY17 to S$3.4mn because brokers migrated to their own back-office systems in February 2018 and no longer require SGX’s contract processing services. In the other segment of Post Trade Services, the securities settlement revenue declined 8% due to a change in the mix of subsequent settlement instructions. However, we think that this segment appears to be stagnating and would not contribute meaningfully to SGX’s growth in FY19.

Good earnings growth is supported by volatility, operating leverage and robust balance sheet. We have increased our FY19e SDAV estimate to S$1.32bn (previously S$1.20bn) because continued stock-market volatility driven by the US-China trade conflict and rising interest rates could benefit trade volume in the short term as the market whipsaws in both directions. SGX’s debt-free balance sheet and monopoly should facilitate inorganic earnings growth.

We maintain our BUY recommendation. Valuations are attractive in view of the 38% ROEs, 4% dividend yield and momentum in earnings. 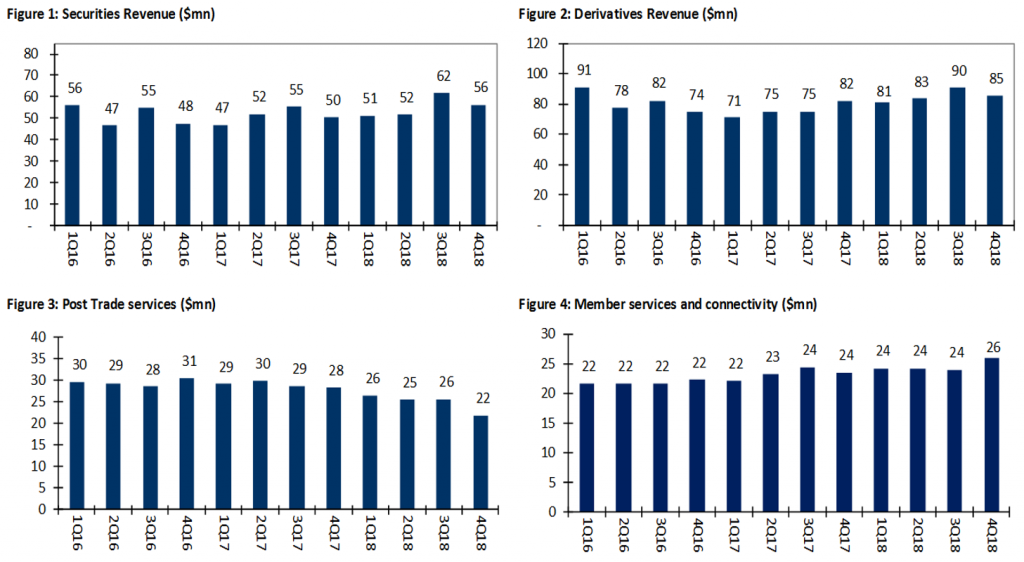