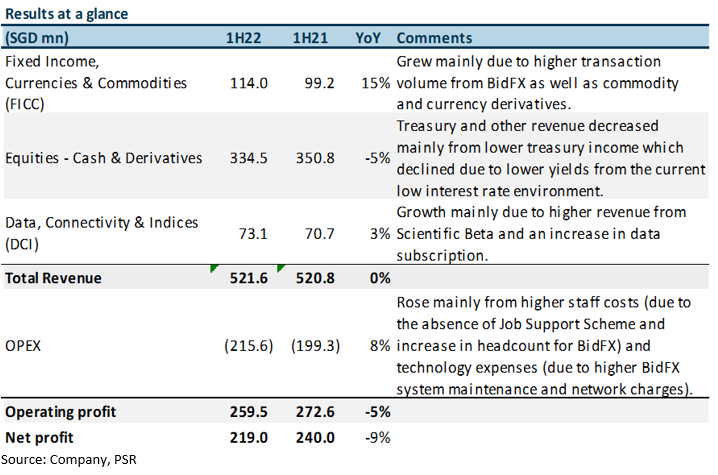 + New businesses accelerated growth. Newly acquired BidFX and Scientific Beta contributed S$40mn, or 8%, to 1H22 revenue, which is 20% higher YoY. Consequently, FICC and DCI grew 15% and 3% YoY respectively to mitigate Equities – Cash & Derivatives revenue decline. Both businesses are expected to remain growth engines for SGX, with opportunities from cross-selling and new client acquisitions on the back of customer access to an enlarged trading network.

– Lower yields drag equity derivatives treasury income. Equities – Cash & Derivatives was 5% lower YoY as equity derivatives volume declined 4%. This was mitigated by higher fees per contract of S$1.50 in 1H22, 18% higher YoY and in line with our expectations as introductory fees in 1H21 tapered off. 1H22 treasury and other revenue declined 46% YoY mainly from lower treasury income, which declined primarily due to lower yield. Nonetheless, this is expected to recover with rising interest rates, with SGX’s management mentioning that the low treasury income is to remain for the following months, with only an uptick expected later in the year.

Investing for medium term. SGX has guided FY22 expenses of S$565m-575mn, an 8.6% increase from FY21 at the mid-point. More than 50% of the increase will be for near-term investments. These include setting up FX ECN, climate-related initiatives and continued investments in BidFX and Scientific Beta. However, this guidance includes expenses for Maxxtrader, which was previously not included in their earlier guidance. With that, SGX expects FY22 expenses to remain flat or marginally higher compared with FY20’s pre-acquisition expense of S$475mn.