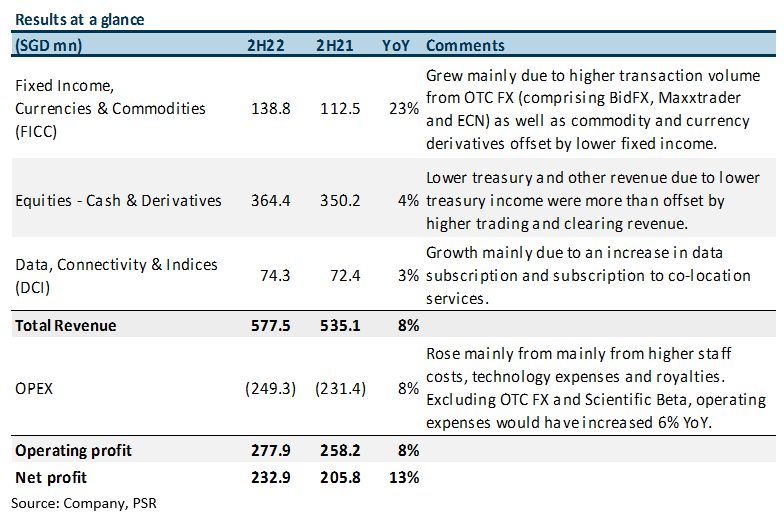 + New businesses accelerated growth. With the acquisition of MaxxTrader in Jan 2022, SGX’s OTC FX (BidFX, MaxxTrader and Electronic Communication Network (ECN)) average daily volume grew 64% YoY to US$70.6bn with a target of US$100bn in the medium term, and contributed S$55mn, or 5%, to FY22 revenue. Consequently, FICC and DCI grew 23% and 3% YoY respectively to boost revenue growth. Both businesses are expected to remain growth engines for SGX, with opportunities from cross-selling and new client acquisitions on the back of customer access to an enlarged trading network.

+ FTSE China A50 and Nifty 50 contracts continue to grow. Despite the introduction of HKEX’s MSCI China A50 Connect Index in Oct 2021, SGX’s FTSE China A50 contract saw increased volume, with growth of 9% YoY. SGX expects trading activity and open interest of the FTSE

– Equities – Cash revenue and treasury income dip. Equities – Cash revenue was 6% lower YoY mainly due to corporate actions and other revenue dipping 14% YoY and trading and clearing revenue decreasing 9% YoY as daily average traded value, total traded value and overall average clearing fees declined. On the Equities – Derivatives side, treasury revenue was down 50% YoY to S$28.6mn mainly from treasury income, which declined primarily due to lower net yield. Nonetheless, this was offset by an increase of 22% YoY in trading and clearing revenue as equity derivatives volume increased 4% YoY and higher fees per contract of S$1.51 in FY22 (FY21: S$1.34), 13% higher YoY. Overall, equities revenue was stable YoY at S$699mn and accounted for 64% (FY21: 66%) of revenue.

Investing for the medium term. SGX has guided FY23 expenses to grow 7-9% from FY21. This includes ~2% growth from the full year impact of the acquisition of MaxxTrader. The higher expenses are mainly from the buildout of their OTC FX business and higher staff costs from salary increments. With that, SGX expects medium-term expense guidance to remain at mid-single digit growth.

Rising interest rates. Apart from the banks, SGX is another beneficiary of higher interest rates, and treasury income is expected to recover with rising interest rates, with SGX’s management mentioning that the low treasury income is to remain for the following months, with only an uptick expected later in the year. As at FY21, SGX reported a S$12bn float from collateral and S$72mn of interest income which represents 13% of FY21 operating profit. Based on our calculations, a 25 basis point rate hike would mean an increase of S$30mn in operating profit (or a 6% uplift).