Our take on the Budget

1) As we highlighted last year, Primary Deficit will continue to expand as Singapore restructures its economy amid a slowing global growth and potential slowdown in global trades due to protectionism sentiment in some of the larger economies.

Since FY2011, operation revenue for the government grew at an compounded annual growth rate (CAGR) of 6.1% till FY2016, while operating expenses grew 8.9% CAGR in the same period. This has turned a primary budget surplus in FY2011 to a primary budget deficit in FY2015 as operating expenses outgrown revenue. In addition, Primary Deficit is expected to double to $5.6 billion in FY2017 from $2.7 billion in FY2016. 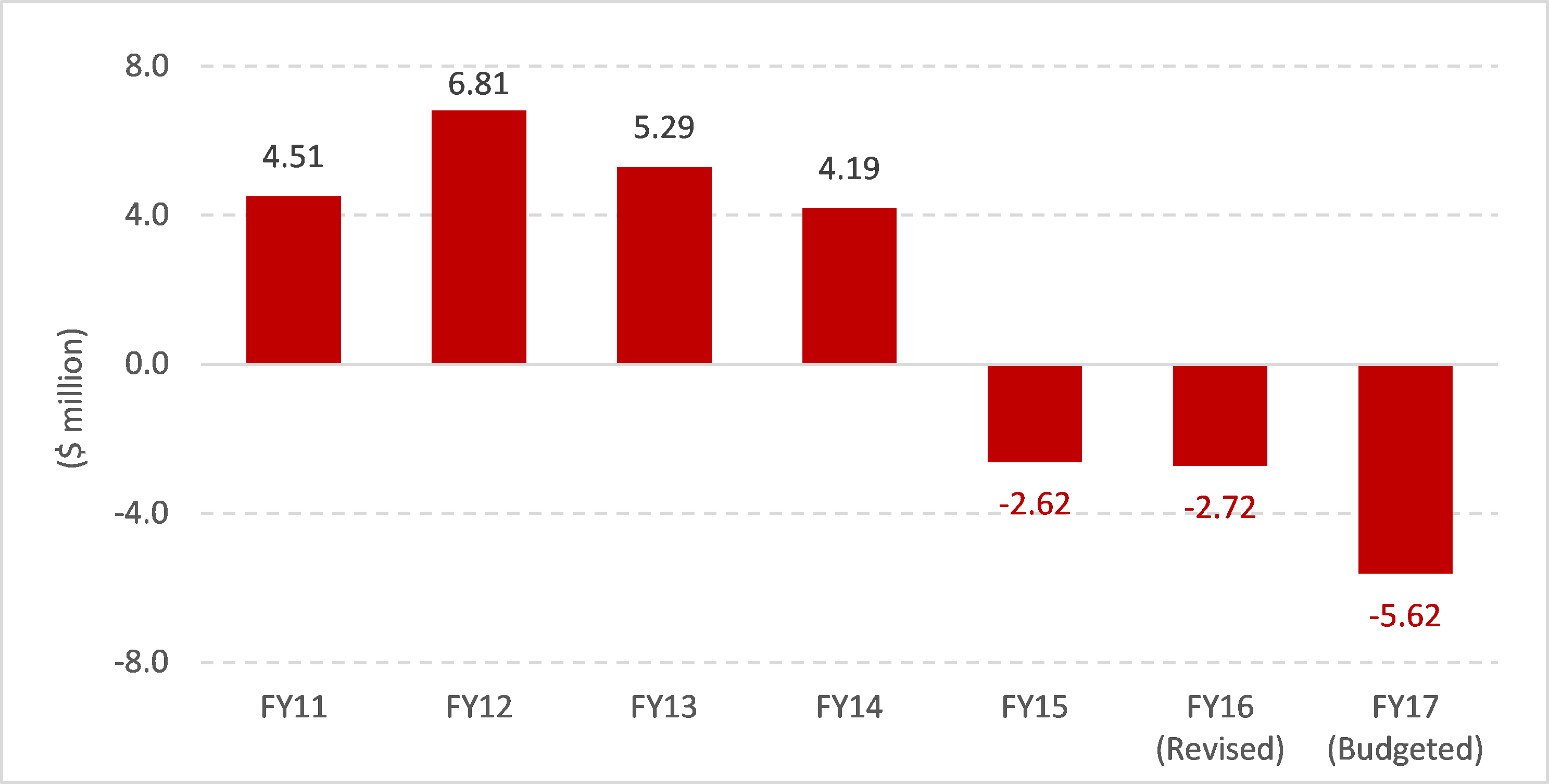 While Primary Budget remained in deficit for two consecutive years, overall budget was helped by the inclusion of Temasek Holdings into the Net Investment Returns Contribution. Budget FY2017 is expected to be the same.

After including Special Transfer and Net Investment Returns Contribution, the revised FY2016 overall budget surplus of $5.2 billion was 50% higher than the original budgeted surplus of $3.5 billion in 2016. Overall budget for FY2017 is expected to be in a surplus of $1.9 billion.

2) We expect to see the Singapore Government continue finding new sources of tax revenue or enhance existing tax revenue going forward. An example will be the newly introduced Carbon Tax in FY2017 which will fund measures to reduce emission. As mention in our 2016 Singapore Budget Report we believe that an increase in Good and Service Tax (GST) is very probable in the near future as they seek to balance their primary budget.

The Singapore government has announced that they will be carrying forward S$700 million worth of public infrastructure projects to start in FY2017 and FY2018. The move aims to support the construction sector which has undergone a sustained decline over the past few years. The amount represents 2.9% to 3.5% year-on-year (yoy) increase to the public sector construction demand, which is expected to be between S$20 billion to S$24 billion in FY2017 according to a forecast by the Building and Construction Authority of Singapore. The Singapore government has also mentioned that these projects also involve the upgrading of community clubs and sports facilities, where contractual values of these projects are relatively smaller compared to larger scale public infrastructure projects.

We opine that SMEs may be more inclined to partake in the peripheral works since the value of these contracts may be too small for larger construction firms to generate meaningful profits. We view that it is important to further examine the breakdown of the S$700 million public infrastructure projects before we can quantify and assess the potential benefits that can be brought to the sector, which we however do not have further information at this point in time.

Budget FY2017 was once again focused on innovation, digitalisation and helping the SMEs. This was an expected gradual next step from the government to transform our city state into a global information technological centre in a bid to stay ahead of the curve in the face of global demographic crisis. Together with the establishment of the Committee on the Future Economy (“CFE”), Budget 2017 is a clear indication of how Singapore will be restructuring its economy.

Earlier in 2016, Ministry of Manpower has highlighted the importance of improving SME’s productivity. According to Minister of State for Manpower Teo Ser Luck, there are 190,000 enterprises in Singapore, of which 99% are SMEs and they employ about 70% of the workforce. However, SMEs contributed only about half of Singapore’s gross domestic product (GDP) in 2014. Hence, we see that Budget 2017 emphasises on helping SMEs to achieve stronger business growth and leaving less money on the table for larger corporations.

To conclude, we do not see any material impact on MNCs and we do not anticipate any further impacts on the companies under our coverage besides the construction and infrastructure sectors mentioned earlier. 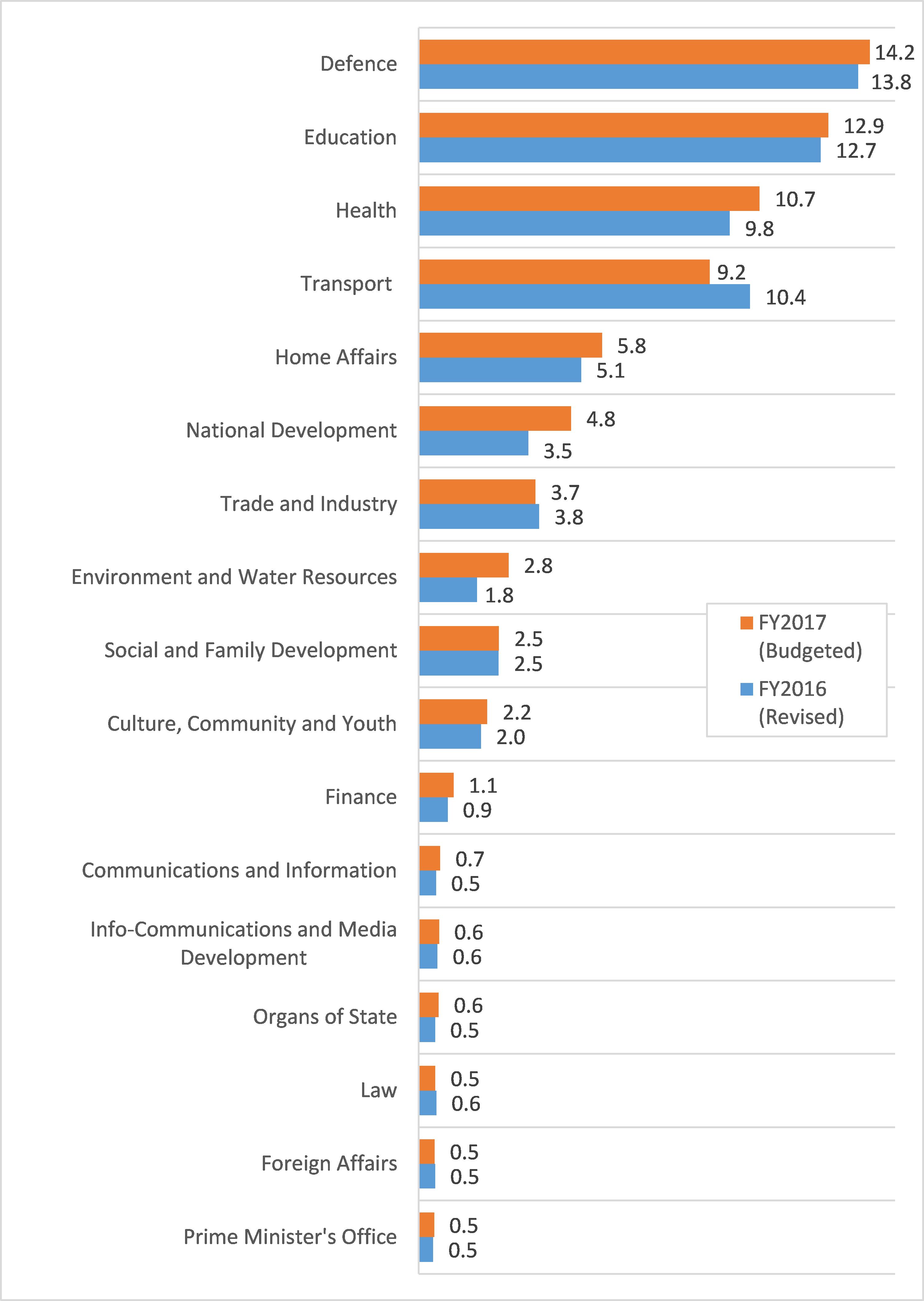 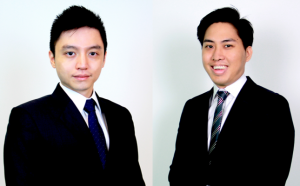