Turnover volume for SGX’s newly-launched FTSE Taiwan Index Futures was 1.9mn in November, just 3% shy of volumes for its MSCI substitute a year ago. Successful product replacements ahead of MSCI contract expiries in February 2021 give us reason to believe that SGX’s earnings will not be materially affected in FY21.

Earnings fell by varying degrees but a few trends could be observed.

Fee and commission income: While fees and commissions were down 2-9% YoY, they grew 14-17% QoQ. This tracked Singapore’s exit from its circuit breaker in the third quarter. Other non-interest income was higher for DBS and OCBC on the back of better trading income. A slower recovery in non-interest income is expected in FY21 as economic conditions remain challenging in the short term.

Allowances: Allowances stayed high as banks continued to build reserves for potential NPL formation in FY21. This was in preparation for the end of Singapore’s loan moratoriums next year. All three banks remained ahead of schedule in their reserve build-up, accumulating 31-52% of expected credit costs by 3Q20 (Figure 9).

Better clarity on asset quality allowed UOB to lower its credit-cost outlook to 30-40bps from 50-60bps for FY21. OCBC expects credit costs to come in at the lower end of its 100-130bp guidance for FY20 and FY21. DBS maintains its 80-130bp range for the two years. 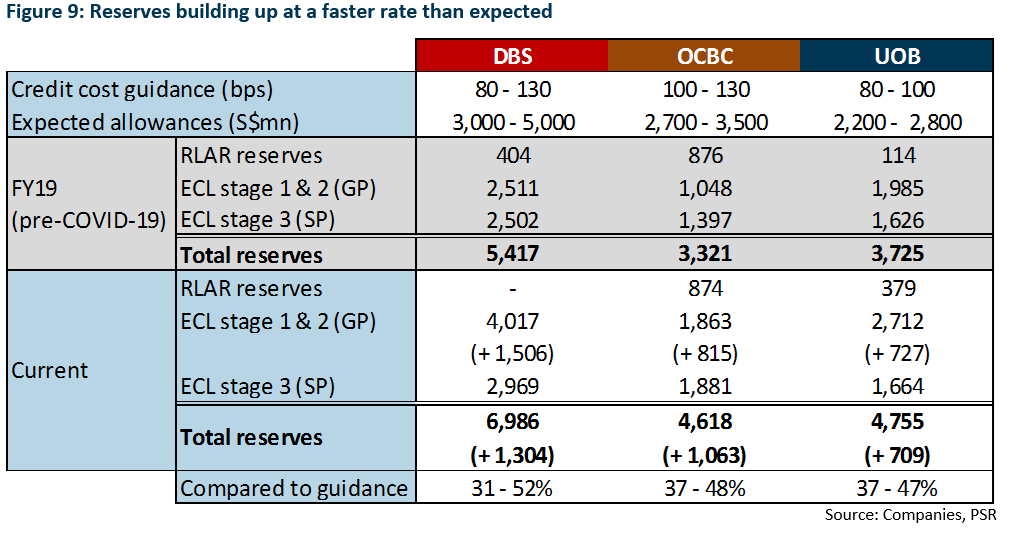 Reserve Bank of India (RBI) approved merger of DBS and Lakshmi Vilas Bank (LVB)
On 25 November, the RBI approved the merger of DBS India and LVB (Non-Rated). DBS will inject Rs2,500 crore or about S$476mn into the merged entity. Alongside operating losses from LVB, we are expecting short-term merger expenses.
This could present a short-term drag to DBS’ earnings recovery in FY21.

Two digital full banking (DFB) and two digital wholesale banking (DWB) licences
On 4 December, the MAS announced the results of digital-banking licence bids. Four were awarded, two DFB and two DWB. This was one less than the total five – two DFB and three DWB – that MAS was willing to issue. The successful DWBs were deemed to be demonstrably stronger across the selection criteria. MAS may grant more DWB licences in the future.

All digital banks are expected to begin operations in 2022. Till then, we do not foresee any material impact on the three banks’ earnings. We believe the three have a head start in the digitalisation race. We also expect the digital entrants to face a challenging operating environment in a well-banked society.

Investment actions
Maintain Neutral. While the credit outlook has improved for banks, we believe that an earnings recovery to pre-COVID-19 levels will only be further down the road, in FY22.
We downgrade OCBC and UOB to NEUTRAL from ACCUMULATE as low interest rates, coupled with higher credit costs, continue to contribute to weak earnings. This is despite our higher revised TPs (Figure 10) to factor in normalising allowances in FY21. We remain NEUTRAL on DBS as a downgrade was made in August on an earlier rally.
For sector exposure, we prefer UOB (UOB SP, Neutral, S$21.10) as lower credit costs guided by the bank should lift pressure off its earnings faster than for its peers.