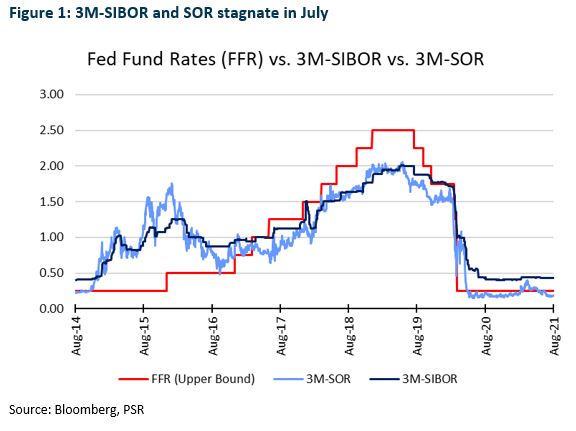 After the MAS lifted restrictions on dividend distribution, all three local banks reverted to pre-pandemic DPS payouts. DBS paid 33 cents for 2Q21. UOB’s 1H21 DPS was 60 cents for a payout of 50%. OCBC declared an interim DPS of 25 cents for 1H21, representing a payout of 42%.

With the continued spread of the Delta variant in Southeast Asia and expiry of loan moratoriums, we expect a slight uptick in NPLs. We keep provisions for FY21e unchanged, however, as we believe sufficient provisions have been made. 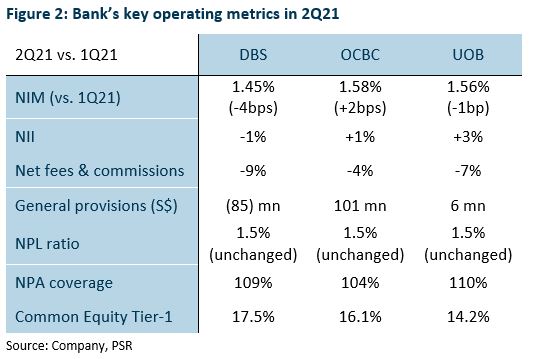 DBS’ 2Q21 earnings were 10.7% above our 2Q21e forecast. The outperformance came from net fee income and S$85mn of GP reversals. NIMs retreated 4bps QoQ to 145bps. Full-year guidance is now at the lower end of guidance. Asset quality was stable, resulting in further GP write-backs of S$85mn. Management lowered full-year total allowances to under S$0.5bn (1H21 allowances at S$89mn).

OCBC’s 2Q21 earnings of S$1.16bn missed our expectation by 7% on higher-than-expected allowances. Allowances were largely for exposure to a large number of corporate customers in oil trading and offshore support vessels. Total allowances of S$232mn were made up of S$131mn SPs and S$101mn GPs. Nonetheless, NIM rose 2bps QoQ. As a result, NII edged up 1% QoQ.  Provisions were higher than expected.

Domestic loans rose 3.5% YoY in June, tracking above our expected range of 2- 3% for 2021 as fears of a slowdown from Singapore’s move to Phase 2 (Heightened Alert) did not materialise.

Business loans were up for the ninth straight month, by 2.6% YoY in June. Loans picked up 1.9% MoM. Loans to the building and construction segment, the single largest business segment, contracted 0.7% QoQ to S$151.33bn, though they still  grew 2.2% YoY. Loans to manufacturing increased for the second straight month, by 1.8% YoY.

Consumer loans were up 0.7% YoY in June, for the 11th straight month. This was aided by strong loan demand in the housing segment. Housing loans, which make up three-quarters of consumer lending, extended their growth streak for the 10th straight month, up 3.4% YoY to S$206.3bn.

Overall loans through the domestic banking unit – which captures lending in all currencies but reflects mainly Singapore-dollar lending – rose for the eighth consecutive month, the strongest in the year. They were up 1.5% in June to S$703.9bn, vs. a 0.2% increase in May.