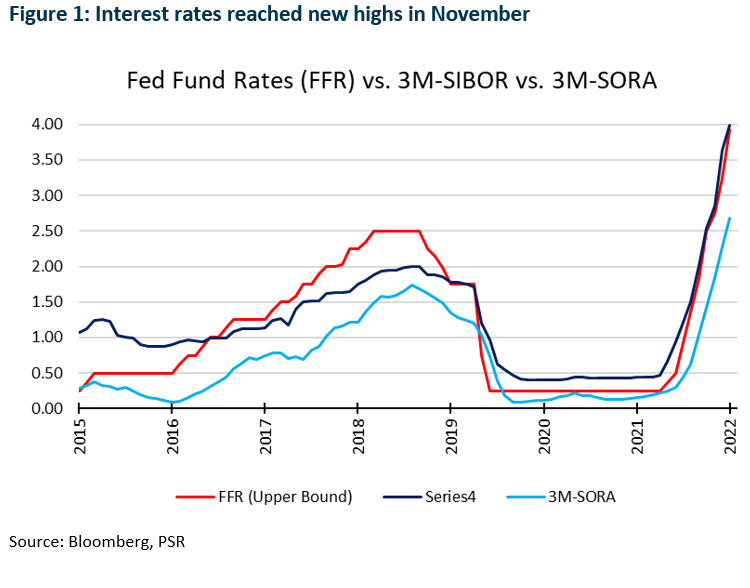 Overall loans to Singapore residents – which captured lending in all currencies to residents in Singapore – rose by 2.75% YoY in October to S$826bn. This is below our estimate of mid-single digit growth for 2022 as the rise in interest rates start to be more fully felt.

Total deposits and balances – which captured deposits in all currencies to non-bank customers – grew by 10.2% YoY in October to S$1,743bn. The Current Account and Savings Account (CASA) proportion dipped slightly to 21.1% (Sep22: 22.2%) of total deposits or S$368bn as there was a move towards FDs due to the high interest rate environment.

Amongst the various loans segments over the past 5 years, Financial Institution, Investment and Holding Companies (FI) was the fastest growing. We believe bulk of these loans were for commercial property acquisitions especially for REITs.

The three local banks combined loans to the Financial Institution, Investment and Holding Companies segment grew by 25% in 2021 to S$103.4bn and grew at a CAGR of 6.9% over the past five years. It outpaces total loans CAGR of 4.9%.

The largest stress in loans portfolio is possibly from the FI segment as it was the fastest growth category. Anecdotally, we do observe stress in commercial property loans to listed companies with exposure in emerging countries such as, China, Malaysia, and Myanmar.