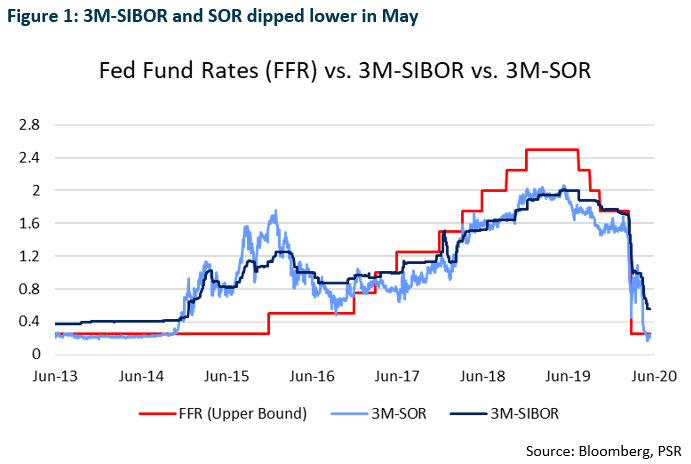 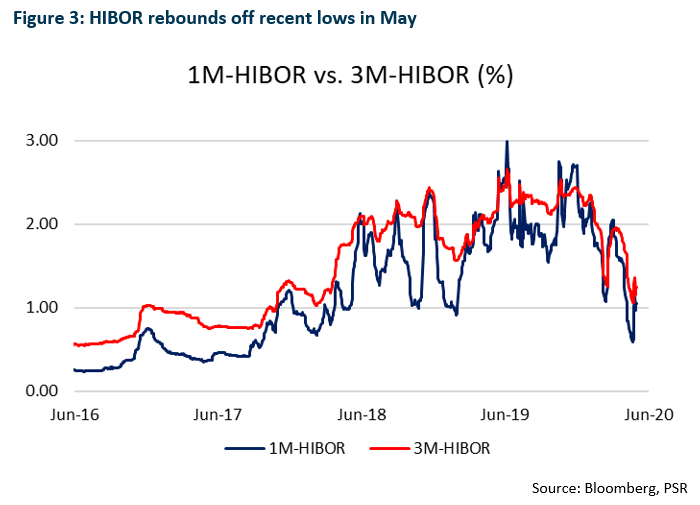 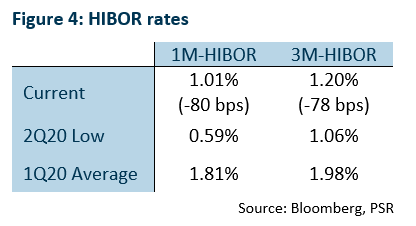 Similar moves were made by DBS and UOB to manage funding costs on their high-interest accounts – the DBS Multiplier account as well as the UOB One account – respectively.

In February, changes were made on the DBS Multiplier account such that higher interest was applied on balances up to S$25,000, which was reduced from S$50,000 previously. Interest rates were also capped at 2%, down from 2.08% in May assuming all spending criteria are met.

Business loans grew 5.36% YoY in April, maintaining at healthy levels above 5% since October 2019. 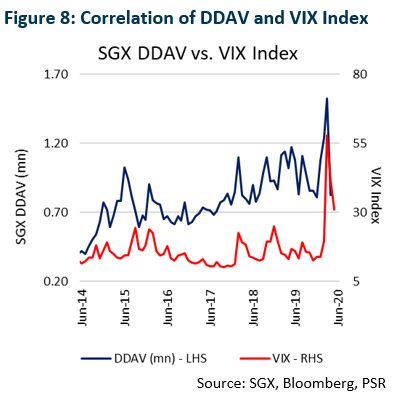 SDAV grew 34% YoY to $1.477mn in May (Figure 9). However, part of the growth was attributed to the rebalancing of MSCI Singapore Index at the end of the month. Removing the spike as a result of the rebalancing will see SDAV growing by 22% YoY, a slower but robust growth.

VIX averaged 30.9 in May, falling for second consecutive months as market outlook turns positive as economies starts to reopen. DDAV will likely come under pressure in May, but may be bolstered by short term trading volumes as clients begin unwinding their positions after SGX announced the partial cessation of its MSCI licensing in February 2021. 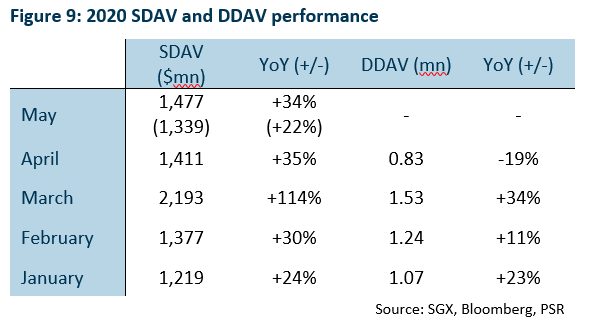 Partial cessation of the license agreement with MSCI

On 27th of May, SGX announced that it will be reducing its licensing agreement with MSCI after the current agreement expires in February 2021. 25 of 28 of its MSCI equity derivative products will cease trading, with only Singapore index futures remaining.

MSCI will be launching its products on Hong Kong Exchange (HKEX) moving forward.

Based on SGX’s latest monthly report for April, the affected offerings make up 14% of total equity derivative contracts (1.7mn contracts of 12.3mn total contracts in April 2020). Based on open positions at the end of April, there were 670k open positions or 37% of all open positions, that will be affected by the cessation of licensing agreement with MSCI.

Equity derivatives contribute to 36% of SGX’s total revenue in 3Q20 (Figure 10), and the cessation of licensing agreement will lead to lower trading and clearing revenue due to reduced trading volumes as well as lower treasury fees from lesser open market positions.

SGX expects earnings impact of between 10 – 15% for FY21, assuming an immediate cessation on 1 July 2020. However, immediate impact may be bolstered as clients have until February 2021 to unwind and close out existing positions.

Nevertheless, SGX will be able to deepen partnerships with existing index partners such as FTSE to launch replacement products. FTSE currently provides SGX with its China A50 index futures, which makes up close to half of SGX’s total derivatives volume in April (6.0mn contracts out of 12.2mn total contracts).

SGX’s acquisition of Scientific Beta in January also provides SGX with capabilities to launch competing products that can replace expiring products. The pivot towards a multi-asset strategy beyond equities and derivatives may provide SGX with a reprieve in the longer term. 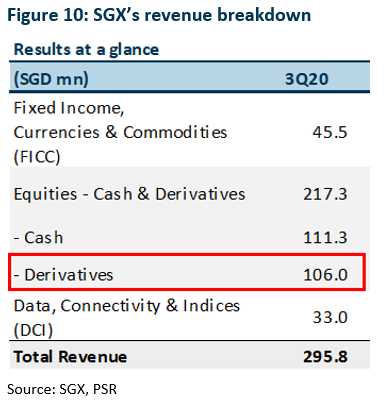 Maintain the Singapore Banking Sector at Neutral. The respective banks’ have been downgraded to NEUTRAL from ACCUMULATE previously due to the strong price movement over the past week. No changes have been made to our underlying estimates.

We feel that the recent run-up in prices may have underestimated some underlying risks arising from heightened credit costs in the near term. Nevertheless, yield remains attractive at c.5%.