Average interest rates observed in 3Q20 was the lowest since 2014 (Figure 1). With 3M-SIBOR and 3M-SOR at 44 bps and 94 bps lower than 1H20 average respectively (Figure 2), we expect banks to report NIM levels at similar or slightly lower than in 2Q20 as continued downward pressure on interest rates offsets benefits from repricing of deposit rates. 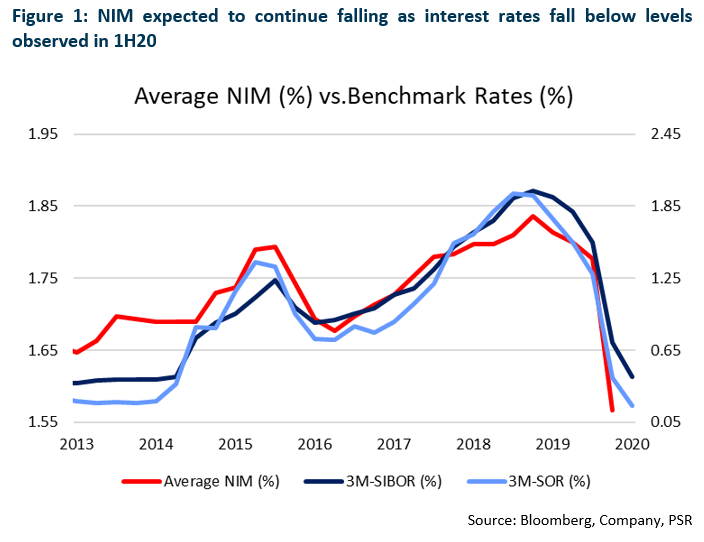 Loans contracted 1.03% YoY in August, as outstanding loans shrank for the sixth consecutive month (Figure 3). The poor loans performance was attributed to business loans, which fell YoY (-0.04%) for the first time since November 2016 in August (Figure 4). Consumer loans fell 2.61% YoY, but improved by 0.33% MoM, as all loans segment apart from housing loans (car loans, credit card loans, share financing and others) improve in August from a month ago. 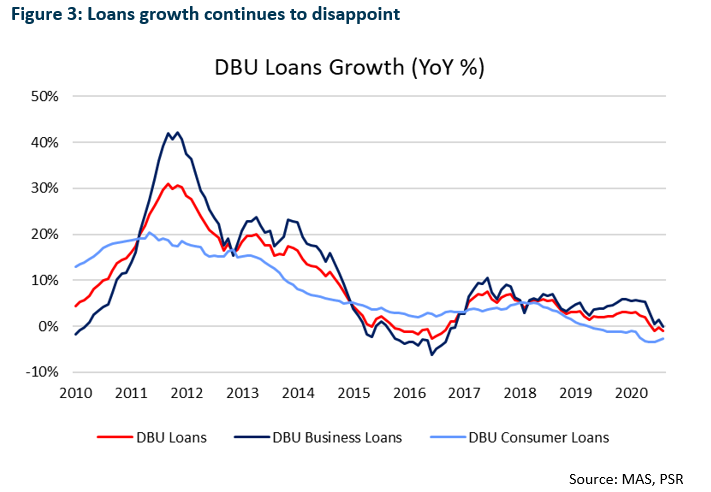 On 5 October, MAS announced that it will be providing additional support for individuals and SMEs needing assistance in loan repayments, including extension in application to various moratorium relief schemes, as well as new measures to reduce cashflow challenges faced by as a result of the economic fallout from COVID-19 (Figure 4). 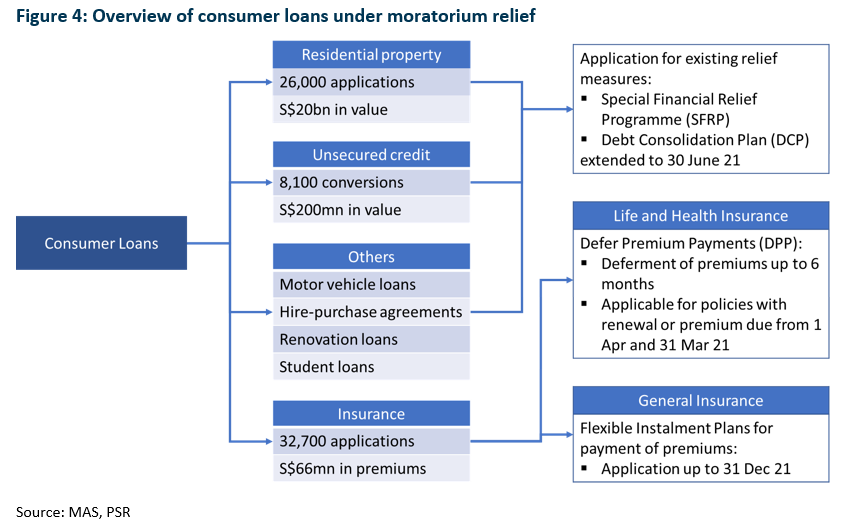 Instead of a blanket deferment in loan repayment during the current loan moratorium period, the additional measures aim to allow individuals and SMEs to resume repayments at a lower quantum before easing back into repayments at levels before the moratorium period. This will partially ease cashflow challenges faced by borrowers while allowing the banks and other FIs to resume loan collections that can prevent cliff effect from a sudden deterioration in loan quality resulting from borrowers who are unable to resume full payments at the onset of the loan moratorium expiry.

Borrowers will also be allowed a longer window to apply for loan moratorium as long as they are not more than 90 days past due when applying for the relief measures. 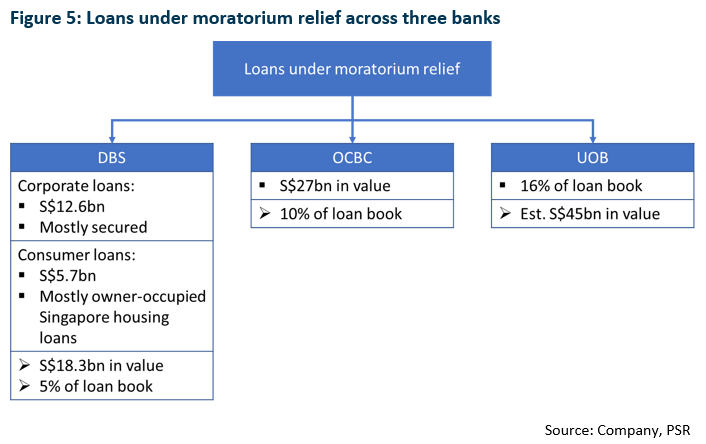 The additional support measures by MAS will allow the banks to reduce default risks from non-payments as banks will be able to begin to loan payments in FY21, albeit at a slower rate.

Preliminary SDAV data indicates a YoY increase of 16% from S$940mn a year ago to S$1,088mn in August (Figure 6). Derivatives volumes also seemed to have picked up in September compared to a year ago. Volumes for the top five equity index futures which makes up more than 95% of monthly equity index futures contract turnover grew by an average of 9% YoY in September (Figure 7). 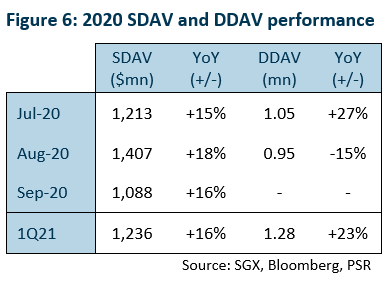 The newly launched FTSE Taiwan index continues to perform well in September (Figure 8), recording more than 300,000 increase in contracts from August to offset the fall in turnover for its MSCI counterpart (-200,000 contracts MoM).

Alongside contribution from Scientific Beta and BidFX acquisitions, we expect SGX to report 10% increase in earnings YoY for 1Q21.

Maintain the Singapore Banking Sector at Neutral. The Singapore banking sector will continue experiencing headwinds from low interest rates as well as heightened provisions amidst the economic fallout in the short-term. Nevertheless, downside risks are mitigated due to the strong support measures provided by the government. We expect earnings to slowly recover

A potential re-rating catalyst will be a better-than-expected credit profile of borrowers post-moratorium in Singapore, which can spell an earlier end to the heightened credit costs which the banks have guided for to the end of FY21.